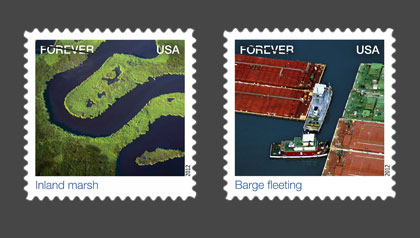 Jim Wark, 80, is the aerial photographer behind the Earthscapes "forever" postage stamp series to be issued in October 2012.

Photographer Jim Wark has captured images of the landscape below his single-engine airplane for more than 20 years. Some are so spectacular that five will appear in the U.S. Postal Service's Earthscapes "forever" stamp series, which will be issued in October 2012.

"I'm always out to get the picture the other guys don't have," says the 80-year-old from Pueblo, Colo. You won't find rainbows or sunsets among Wark's more than 150,000 aerial shots. "To me it's about seeing the world from a different perspective and being able to capture the moment."

Photography was in his blood. "My great-grandfather was a professional photographer, as was my grandfather and all his sons, except my dad," Wark says. "I was taking pictures with a Brownie as a kid and bought my first serious camera in 1949." He earned his wings in the 1950s courtesy of the U.S. Navy, then worked as a mining engineer. It wasn't until 1988, when he was flying a new plane home from Portland, Ore., that something caught his eye and Wark first pointed his camera toward the ground.

The photos turned out so well that aerial photography became a full-time occupation. In fact, his first trip in January 1990 to Utah's Monument Valley resulted in a shot of fog drifting over the sandstone buttes, one of the five chosen stamp images.

From then on, Wark lived out of the plane for three to five weeks at a time. "I'd camp in a farmer's field or on an airport office couch, not because I'm cheap, but to be up and airborne at the crack of dawn."

Wark has photographed every state and Canadian province, Mexico, the Caribbean and Costa Rica, selling his images to the New York Times, the BBC and textbook publishers, among others. And to hear Wark tell it, taking pictures on the fly is a snap.

His high-wing, bush-style plane has a 3-by-4-foot clamshell door next to the pilot's seat. Flying from 500 to 3,000 feet above the target, Wark opens the door, holds one of three cameras with both hands and clicks away. "You keep your feet on the rudder, and if the plane is trimmed up, it pretty much flies itself," says Wark, who doesn't wear a camera strap, yet has never dropped a camera. "I lost a pair of glasses once, but only once," he says with a chuckle.

Wark flies wherever the weather and pictures take him, with some serendipity involved. He points to the railroad roundhouse in Scranton, Pa., another of the Earthscapes stamps, as an example of right place, right time. "Usually I just come across something different, the unexpected, a juxtaposition. I know it when I see it." Then he may circle the site several times, snapping shot after shot.

As to having his images immortalized on postage stamps, Wark is honored and gratified. the Postal Service initially contacted him in 2007 and a project manager plowed through the images in Wark's online gallery. Only in 2010 was he notified that five were chosen. "The one that really surprised me was the New York skyscraper apartments photo. There must be 100 structures in the original print and they cropped it down to five percent, but it still looks great."

Wark took his last aerial photo in June, but bristles at the word retired. Though, his son, John, is now the official eye in the sky ("I was a pilot with a camera. John's a photographer who can fly," he notes with pride), three new coffee-table books with Wark's images are being published this fall, and he still sells photos to customers worldwide.

And when his stamps make their way into post offices next year? Says Wark, "We'll buy a lifetime supply."

Laura Daily is a writer in Denver.