En español | When times are tough, everybody's looking for a little extra cash. And that's also true of Uncle Sam.

See also: 10 ways to give yourself a tax cut

So if you've found a way to earn substantially more income, and federal taxes are not being withheld from it, beware! You may be required to estimate your tax bill and send a quarterly check to the IRS even before your federal return is due in April. If you don't send money that's required, you could get socked with interest and a penalty. 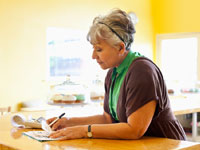 You probably owe estimated tax if your withholdings add up to less than 90 percent of what you expect your total tax bill will be.

Why do some people have to make estimated tax payments? "The federal income tax is a pay-as-you-go tax," notes the IRS on its website. Anyone with a regular job is aware of this, because employers withhold part of every paycheck for income taxes. The potential problem arises when you have income that's not subject to withholding.

Maybe you're an empty-nester who's renting out a spare bedroom or baking cookies to sell at a local farmers' market. Or your writing skills are bringing in extra cash from freelance assignments.

Other sources of income from which taxes are often not withheld include interest, dividends, capital gains, alimony, prizes, awards and gambling winnings.

But even a regular salary, a pension, an IRA distribution or a Social Security benefit can trigger the requirement for estimated payments if the tax you've chosen to have withheld from that check is too low.

If the IRS determines that your extra income is from self-employment, you may owe even more tax. Generally, if you're in business for yourself and earn more than $400 a year, you must pay not only income taxes, but what's known as self-employment tax. That's a substitute for Medicare and Medicaid payroll taxes that you and an employer would jointly pay were the income from a regular job. It adds up to a 15.3 percent bite of self-employment earnings.

How can you tell whether your extra income is enough to trigger payment of estimated taxes? The rules are complex, and full details can be found in IRS Publication 505, Tax Withholding and Estimated Tax.

But for most people, quarterly payments are required if all the taxes provided to the federal government in advance — most often from withholding in a regular job — add up to less than 90 percent of what they expect their tax bill will be.

If you qualify for any refundable tax credits, you're allowed to add the amount of the credits to your withheld tax. Some of the most common ones are the earned-income credit, the American Opportunity credit for undergraduate college expenses, and the adoption credit.

For example, let's say that last year you earned $40,000 at your job and your federal income tax bill was $3,779. You had $3,800 withheld from your pay during the year, so you were square at tax filing time in April.

Next: Software to assist you with estimated tax payments. >>

This year, you're being paid the same salary, but you have earned an extra $10,000 doing odd jobs, with no taxes withheld. So you're earning $50,000 and you will owe $6,250 in federal taxes. But you're having only $3,800 withheld. That amount is less than 90 percent of your bill, so you should plan on making quarterly payments to cover the extra $2,450 that you'll owe.

Another route to take, since you're drawing a regular paycheck as well as earning outside income, is to file a new W-4 form with your employer to increase the amount of tax withheld. The IRS's Publication 919 or its online withholding calculator can help you figure the new amount to withhold.

Even if you fall short of the 90 percent threshold, there are a couple of exceptions that can let you avoid paying estimated taxes:

2. This year's withholding and credits will add up to as much as last year's taxes. This exception benefits people who have a one-year jump in income, perhaps from selling long-held assets for a large gain.

There are several ways to estimate what your taxes for the current year will be. IRS Form 1040-ES, Estimated Tax for Individuals, includes a worksheet to calculate them. (This form is not for the faint of heart!)

If you use commercial tax preparation software such as Intuit's TurboTax or H&R Block At Home, the program will warn you whether estimated tax payments are likely needed for the next tax year. And free online calculators are available from KJE Computer Solutions and, starting in December, from TurboTax.

If you do owe estimated payments, making them is easy — at least as far as the paperwork is concerned. You just divide the tax owed on the income into four equal parts and send payments to the IRS along with a two-line form, with the money arriving by the due dates for estimated payments — in April, June and September of the current year and January of the following year.

If you don't receive the untaxed income until one or more of these dates has passed, divide the extra tax owed by the number of filing dates remaining.

Penalty for failing to file

If you fail to make required payments, the IRS will charge you interest (currently 3 percent) on the unpaid amounts. Taxes that remain unpaid after the filing date could be subject to penalties. You can calculate this penalty using IRS Form 2210, or the IRS will calculate it for you and send you a bill.

Also of interest: How to get help with tax returns. >>

Art Dalglish is a writer and editor based in Maryland.