Carrie Goss was thinking with her heart when she placed an ad on Craigslist seeking a purebred Doberman puppy for her truck driver husband. "I wanted to surprise him for Father's Day," she says. "He just got a promotion to be a classroom instructor for other drivers, so now he's home and able to have a dog." 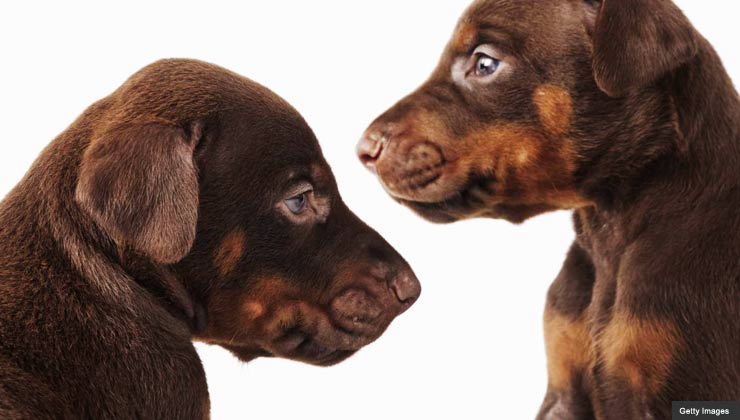 Scammers sell nonexistent puppies online for a string of requests for more money.

A response came almost immediately, with photos, offering a weeks-old female for only $125 — a fraction of the thousands often charged by breeders. The pictures tugged at Goss' heart and so did the sender's own story.

Goss' newfound friend said she was with the United Nations, working in Kenya to fight a malaria outbreak, and had to get the puppy out of that country within two weeks. "She seemed so caring, so sincere," Goss recalls, "asking me all kinds of questions to ensure we would provide a good home for the puppy."

But after paying that $125 by wire transfer, there came a string of requests for additional money — for insurance, for permits, for shipping and boarding costs. She dutifully sent the money, nearly $1,600, before realizing that there was no puppy for sale. She'd been had.

The old puppy scam lives on, but with a twist.

When this ruse first appeared in 2007, the main motivator for the victim was the chance to get a prize purebred at a fraction of the usual cost. Scammers pretending to be breeders stole photos of adorable pups from legitimate websites and offered the animals online for a fraction of their real value.

Now, the initial hook seems to be more emotional than financial — an appeal for help to do a good deed, à la the U.N. worker's puppy-in-need.

Or a scammer might say that "his grandmother or elderly aunt was suddenly hospitalized just after her beloved dog gave birth to a litter of purebred puppies," says Kathleen Summers of the Humane Society of the United States. The fictional pups may supposedly be a popular and expensive breed such as English bulldogs or Yorkies. Or sometimes the scammer will pose as a shelter or rescue organization that has just rescued a litter of puppies of an expensive breed and wants you to "adopt" one just for the price of shipping.

In reality, Summers says, reputable shelters never offer to ship puppies to people they haven't met, and will rarely solicit people by email with such offers. They will ask potential adopters to come to their facility to meet the pet.

If you follow up on the bogus offers, you'll get requests for fee after fee until, like Goss, you wise up. The scammers (who appear usually to be in Africa, particularly Cameroon) may even threaten you with physical harm unless more money is paid. Or they may sell your contact info to other con men for other schemes.

How to Protect Yourself

Anyone who has looked for a pet knows that it's easy for emotions to overwhelm practicality. Here are six red flags to watch out for:

You may also like: Protect yourself from telemarketing fraud. >>