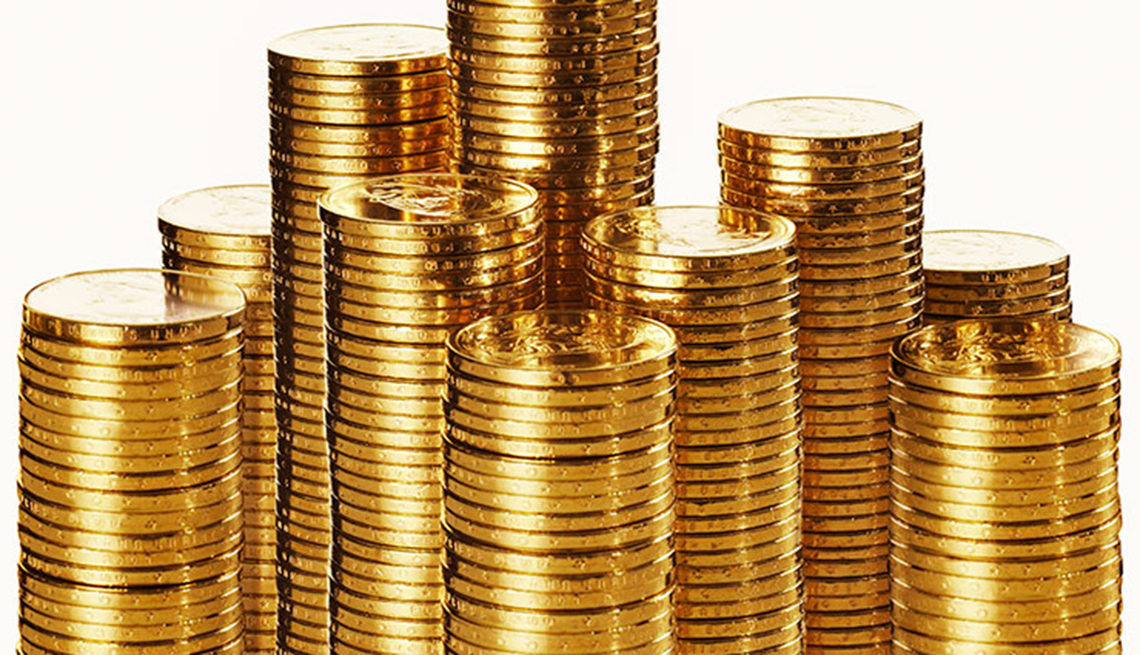 Gold has always had a unique allure, and for the past century it has swung in and out of fashion with investors.

En español | "See this paper money? In 100 years, that'll be long gone." Those late-night television infomercials pitch gold as the only hedge against a future where your dollars are worthless.

The claims tap into our fear that with unrest in the Middle East and elsewhere, a plague threatening Africa and a disappointing job market at home, the end of life as we know it may be near. It's tempting to call that 800 number and stock up on gold, whether Krugerrands and other coins, or gold bars. Indeed, several financial advisers interviewed for this article suggest you invest 5 to 15 percent of your portfolio in gold, just in case.

Despite these emotional appeals, many financial experts warn that gold (and, for that matter, silver, an even more volatile commodity) is just too risky, especially for retirees who need income-producing investments rather than an asset that can swing wildly in value within short periods, or languish for years.

"Gold itself doesn't produce anything," says Eric Meermann, a portfolio manager with Palisades Hudson Financial Group in Scarsdale, New York, which has $1.3 billion under management. "It just sits there — a form of money for people who don't trust other forms of money, like cash or investment securities."

Gold has always had a unique allure, and for the past century it has swung in and out of fashion with investors, surging in times of economic stress or political turmoil. It's not called the currency of fear for nothing.

The last big run-up occurred during the recent Great Recession and the financial crisis of 2008. That year, credit froze, the Dow Jones industrial average lost 778 points in a single day, and Wall Street icons Bear Stearns and Lehman Brothers collapsed while the nation nervously waited to find out who was next.

"In '08 and '09, it looked like we were going into the abyss," says Barry Ritholtz, a financial columnist and the chairman and chief investment officer of Ritholtz Wealth Management in New York, with $182 million under management.

By comparison, the S&P 500 index, whose value was cut by more than half from its high in 2007 to the low in 2009, recovered all lost ground by last year and has since reached new heights. "Gold is an emotional investment, and not one that I would recommend for those approaching retirement or in retirement," says David I. Kass, associate professor of finance at the University of Maryland, College Park. "The price of gold can drop as quickly as it can go up."

Older investors in particular, say many advisers, need investments that generate income, like dividend-paying stocks, municipal bonds or real estate investment trusts that pay out most of their earnings in dividends to shareholders. "To protect against inflation, just own equities," says Meermann. Appreciating stock, over time, has more than kept up with inflation, he says.

Billionaire Warren Buffett, one of the world's most successful investors, has a more colorful argument against gold. In a letter to shareholders in 2011, the Oracle of Omaha said all the gold mined would amount to a 68-foot cube, the money equivalent of all the cropland in the U.S., 16 ExxonMobils and a trillion dollars in cash. "A century from now, the 400 million acres of farmland will have produced staggering amounts of corn, wheat, cotton, and other crops—and will continue to produce that valuable bounty, whatever the currency may be. ExxonMobil will probably have delivered trillions of dollars in dividends to its owners and will also hold assets worth many more trillions (and, remember, you get 16 Exxons)," he wrote. "The 170,000 tons of gold will be unchanged in size and still incapable of producing anything. You can fondle the cube, but it will not respond."

• Not an income producer
• Volatile
• Speculative; only worth what buyers will pay

And don't overlook taxes. Gold is considered a collectible, and profits from a sale are taxed at a maximum rate of 28 percent. In comparison, long-term capital gains on stocks and bonds are taxed at a top rate of 15 percent for most investors.

If you're still convinced gold is for you, you can invest in funds that own gold, though many gold fans — often called goldbugs — prefer buying the physical metal, even though it may mean additional costs for storage and insurance.

Steve Brown, 60, of Texas, bought his first gold coins in 2011, and they now are about 10 percent of his holdings. He sees the metal as a way to diversify his investments and protect against inflation, which he suspects is much higher than reported.

Gold, he says, is an insurance policy, not unlike buying a homeowner's policy for a house that may never burn down: "If everything goes crazy, it gives me some peace of mind."

Andrew Carrillo, a financial planner with Barnett Capital Advisors in Miami, has half his personal investments in gold and advises his clients — especially retirees — to keep 5 to 15 percent of their portfolio in the metal. "Their biggest risk is not running out of money," he says. "The biggest risk is their money running out of purchasing power."

But, in the end, many advisers say to take all that talk of doomsday with a grain of salt. Ritholtz, for one, asserts that the imminent demise of the dollar, the world's dominant currency, is highly unlikely. "Trust me, the people who run Goldman Sachs are not going to let their dollars become worthless," he says wryly. "And anyone who thinks that the dollar is worthless can send their money to me for proper disposal."

And what about silver?

If you're no longer sold on gold, should you consider silver? It's cheaper — selling at around $16 an ounce at the end of last year — and it's often called the poor man's gold. Silver, though, is far more volatile than gold. That's because it has more industrial uses, and when the economy expands and contracts, so does the demand, says Doug Eberhardt, author of Buy Gold and Silver Safely. In the second half of last year, gold fell about 10 percent, and silver plunged more than 24 percent. Silver also shares gold's drawbacks: no dividends and higher taxes on gains.

Jerry Lynch, a financial planner with JFL Total Wealth Management in Boonton, New Jersey, says silver is a market-timing product that requires investors to get in and out at the right time. Few, if any, have that skill, he says.