Here's a savings strategy that's simple enough to use for your entire working life and worth passing on to adult children just entering the workforce: Save your age plus two zeros every year.

Try banking just your age every week ($21 per week when you're 21 years old). It's easier than you think!

For example, when you're 20, your goal is to set aside at least $2,000 for retirement that year, and then $2,100 the next year, when you're 21, and so on. According to Charlie Fischer, one of my "miser advisers" and the cheapskate genius who came up with the idea, it has worked well for him for many years, and now that his daughter is working, she is enrolled in his Saving Your Age program, too. 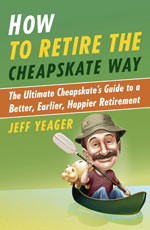 Adapted from How to Retire the Cheapskate Way: The Ultimate Cheapskate's Guide to a Better, Earlier, Happier Retirement.

"I know it sounds silly, and it's totally arbitrary and may not work for every-one," Fischer admits. "But it's been an easy way for me to think about and remember how much I plan to put away for retirement every year — as long as I can remember how old I am, that is." To simplify things, Fischer has authorized his bank to automatically transfer the desired amount from his checking account into his retirement investment account according to a preset schedule.

He's also found that gradually increasing his annual retirement savings by only $100 a year has been virtually painless, but mathematically it really adds up. Assuming, say, a 5 percent annual rate of return, his Saving Your Age program will generate a retirement nest egg of nearly $500,000 over a 40-year career.

If you can't free up your age plus two zeros as a set-aside for retirement every year, try banking just your age every week ($21 per week when you're 21 years old). It's easier than you think, especially because your salary is likely to rise steadily throughout your career, making the weekly savings that much less noticeable. You'll be saving only about half as much under this modified plan, but a quarter of a million dollars in the bank after a 40-year career ain't nothin' to sneeze at, either.