Remember pensions? Back in 1975, 85 percent of private-sector workers covered in a workplace retirement plan had one. Now it's closer to 30 percent. Unless you're in the public sector, your workplace retirement options are probably limited to a company 401(k)-type plan, which lays the responsibility for retirement squarely on you.

Plan and save now for later, much later. — Photo by Dan Saelinger 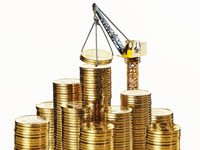 That's a trend that has retirement experts worried. "The 401(k) alone was never really meant to be a complete pension plan for clients," says Dan Keady, director of financial planning for the financial-services organization TIAA-CREF. "Most people also had a defined benefit plan."

The solution, experts say, is to build a "personal pension" with a portion of your assets. To encourage people to do just that, the federal government recently proposed a host of regulatory changes to help Americans convert 401(k) assets into monthly checks.

These rules should make it easier to use part of your 401(k) stash to buy a longevity policy, a relatively new kind of annuity that kicks in at an advanced age. You could buy the annuity at retirement but agree to defer payouts until — and only if — you reach 80 or 85.

Why would you kiss your cash good-bye for 20 years — and maybe forever? Retirement experts tout longevity policies because they're an effective defense against the risk of outliving your money.

For buyers, they can be a potent planning tool. You know your living expenses will be covered if you hit 85, which translates into peace of mind — and greater freedom to spend now.

But perhaps the biggest attraction of longevity policies is cost: They are far cheaper than their better-known cousin, the single premium income annuity (SPIA). Both are sold by insurance companies, but an SPIA is an immediate annuity — you turn over a wad of cash and start getting payments right away.

AARP Retirement Calculator
Is your retirement on track? Plan your financial future so you can retire when you want.

Longevity policies are a deferred annuity; they're less expensive because you're giving up control of your money for years, and you won't get a penny back if you pass away prematurely. MetLife says a 65-year-old man who wants $1,500 in monthly income could buy an SPIA for $272,000; a deferred longevity policy that pays the same amount starting at age 85 would cost just $52,000.

Longevity policies have been available for years for individual buyers, but they haven't been popular. One obstacle: Current tax laws make it difficult to set aside a portion of a 401(k) for an annuity.

Under the rules, people must begin withdrawing a specified amount from their accounts (called a required minimum distribution, or RMD) after they turn 70 1/2. The proposed changes exempt the annuity purchase from RMDs, which should make an annuity more attractive for people who want to minimize their withdrawals.

Interest in income annuities is growing: Sales rose 6.6 percent in 2011, to a record $8.1 billion, according to insurance-industry research group LIMRA. A New York Life deferred annuity aimed at pre-retirees (ages 55 through 65) is off to the fastest start of any annuity in company history.

A variety of online tools ease annuity shopping: Both Vanguard and Fidelity Investments, for example, offer Web resources for comparing policies; ImmediateAnnuities.com can give you an instant quote. Selecting an annuity provider means choosing a partner for life, so check insurance ratings at A. M. Best Company, Standard & Poor's, Fitch Ratings or Moody's Investor Services. You also mitigate risk by spreading annuity purchases among more than one carrier.

Income annuities aren't for everyone. Once you've bought one, the principal's gone. There's no take-back option for buyers who need emergency funds or have second thoughts. But some policies offer a "cash refund" feature that pays whatever remains of the premium to a beneficiary if the buyer dies prematurely.

Critics also warn of inflation risk. Standard fixed annuities offer payments that don't rise with inflation, so future checks could be worth less. You can buy cost-of-living add-ons that automatically increase with inflation, but at significant additional cost.

"Having one fixed stream of cash flow that can't change is a dangerous approach," argues Charlie Farrell, a principal at Northstar Investment Advisors.

Also, because of low interest rates, both immediate and deferred annuities have less attractive terms than they've had in the past or may have in the future.

But the key factor in deciding to purchase an income annuity, either an SPIA or a longevity policy, is health. "If you're a single male who has smoked all your life and no one in your family's history has lived past 63, a lifetime income annuity might not make a lot of sense," says Dallas Salisbury, president of the Employee Benefit Research Institute.

"On the other hand, if your parents lived to 94, you never smoked, you're not obese, and your doctors say your biggest problem is that you might live to 105, for that person not to have a cost-effective, well-structured set of annuity options is a sad thing," he says.

Also of interest: Think you're ready for retirement?

Three more ways to get income in retirement

Although you’re eligible to start receiving payments at 62, you’ll get only 75 percent of your benefit for life. Waiting until full retirement age (now 66) gets you 100 percent of your earned benefit. At 70 you’d get 132 percent. And cost-of-living adjustments awarded during the years you waited are added in when you do file.

Financial Engines, which assists retirement savers with large workplace plans, offers a product called Income+ that splits a retiree’s account into three pools of money: 65 percent in bond funds, 20 percent in stocks, and 15 percent as a “longevity reserve” that gives the retiree the option of buying an immediate annuity at age 85.

For older homeowners, downsizing to a less expensive property can help fund retirement. Reverse mortgages offer a second option for those over 62. Although standard reverse mortgages carry heavy fees, the HECM (Home Equity Conversion Mortgage) Saver costs less and can be used as a flexible line of credit.