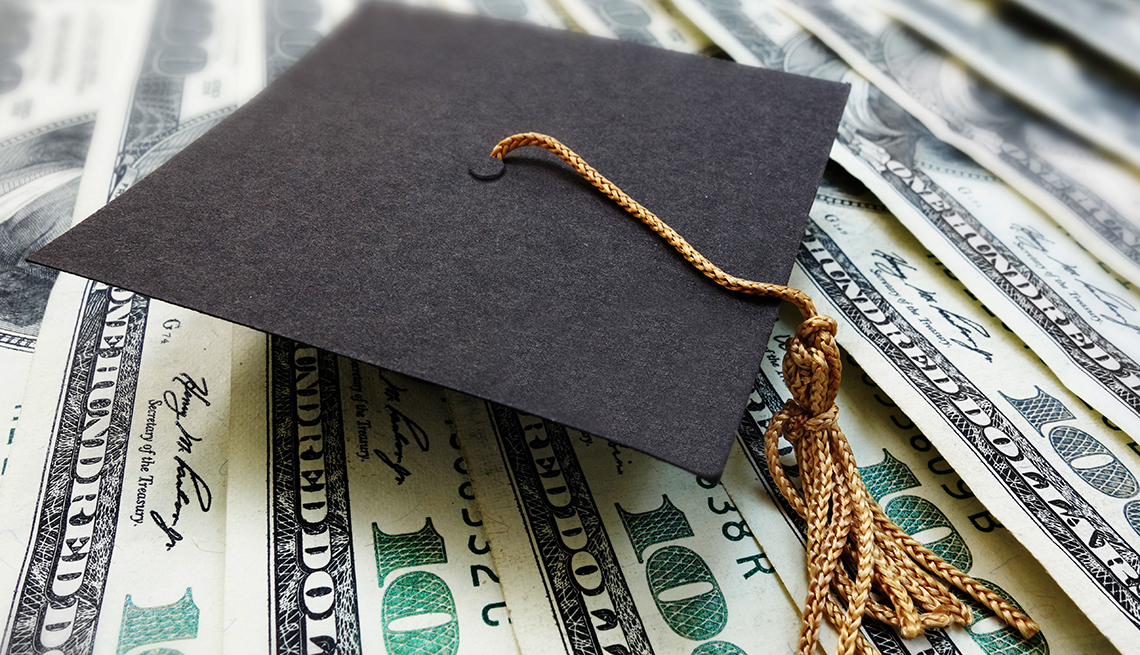 Editor’s Note: A reference to the MIT AgeLab project has been expanded to offer more detail.

Student loan debt is growing at alarming rates for adults age 50 and older, according to a new report from AARP. Fifteen years ago, borrowers in this age group accounted for $47 billion of the nation's student loan debt. By last year, that figure had grown to $289.5 billion.

Paying for higher education is becoming an intergenerational burden, ensnaring more older adults and delaying or battering the retirement plans of many of them. The report says that in 2015 “approximately 29 percent of the 6.3 million borrowers ages 50-64 were in default,” meaning payments on a loan were at least 270 days past due. And among the 870,000 people over age 65 who had student loan debt that year, 37 percent were in default, making it possible for the federal government to take up to 15 percent out of their monthly Social Security benefits.

"Many people are carrying their own student loan debt for longer periods of time,” said Lori Trawinski, AARP's director of banking and finance and lead author of the report. “In the pre-retiree years, which we typically consider to be ages 50-64, people should be at their peak earning years and also accumulating retirement savings, hopefully at adequate rates. To the extent that their budget is squeezed by the need to make student loan repayments, it's no doubt cutting into their ability to save for other purposes."

As part of the report, AARP surveyed more than 3,000 Americans age 40 and older about how they have financed higher education for their loved ones. The survey found that among adults 50 and older, cosigning a private loan was the most common way to help pay for someone else's education, something that 45 percent of respondents did. Among the cosigners, 25 percent said they had to make at least one payment on the loan, an expense that caught many of them by surprise.

Because college students are limited in how much they can borrow, many young adults lean on their parents for support. “Almost everybody who needs a private student loan is going to need a parent or grandparent to be a cosigner on it,” said Persis Yu, a staff attorney at the National Consumer Law Center who also directs the group's Student Loan Borrower Assistance Project.

The growing loan balances among this group are “without a doubt” a shock to the retirement planning of these older Americans, said Julie B. Miller, a researcher at the MIT AgeLab. As part of a national study conducted by the MIT AgeLab and sponsored by TIAA, Miller and colleagues have conducted focus groups with 100 individuals, including 29 who are 50 and still have student loan debt, either for themselves or others. She is heading a project on how college debt affects family dynamics, long-term financial planning and retirement for adults ages 25 to 75.

"There was a lot of anger,” especially among individuals nearing retirement age who've carried their college debt for many years, some for 30 or more, Miller said. Some adults in her focus group took out loans “in small amounts” decades ago and “life took twists and turns.” Others borrowed to finance their educations after their children were older because “college was on my bucket list,” Miller said.

Adults over 50 with college debt from paying for their loved ones’ education had an even wider mix of emotions, Miller said. One woman in Miller's focus groups accumulated debt from both her own college experience and that of her son. She also took on $20,000 in credit card debt to pay her son's tuition. Miller said the woman's outlook was that “retirement, the ‘R word,’ is not a word that I use."

In another example, Miller described a man in his early 60s who had taken out $300,000 in loans for all four of his children and still owed around $200,000. He told Miller that he and his wife made financial sacrifices when they were younger because they wanted to be active parents, which meant working less or holding positions that offered more flexibility but less pay. Now he's “literally paying the price because he needs to be working longer so that he can be repaying these loans,” Miller said.

Younger students who borrow can generally look forward to the higher incomes that typically come with a college education, in most cases justifying the initial debt. “Historically, people tended to incur debt at younger ages — to pay for their college education and buy homes — and then paid the debt off during their working years,” the AARP report says. “This enabled them to enter retirement debt-free and gave them a better chance of obtaining and retaining financial security as they aged.”

But borrowing for loved ones “doesn't increase your earnings potential. You're not getting any extra ability to pay for it,” said Douglas Webber, an economics professor who studies higher-education issues at Temple University in Philadelphia.

In fact, most borrowers who could benefit from the income-driven repayment plans don't sign up for them, federal data show. That's also true for borrowers age 50 and up, said Robert Kelchen, a professor of higher education at Seton Hall University. Such plans not only allow borrowers to pay lower monthly installments but also can offer debt forgiveness after 20 or 25 years.

AARP's report also examines the changes to federal student loan policies that might help older borrowers, including allowing those who are in default to enroll in income-driven repayment plans and prohibiting the government from taking money out of Social Security benefits and other federal payments to borrowers in default. It also recommends permitting more education loans to be dischargeable in bankruptcy, such as those with no income-based repayment options and “private loans that lack death or disability discharges."

Other policy recommendations concerned financial literacy. The AARP report says that the majority of the respondents who cosigned for a private loan did not know that most of them allow cosigners to be removed from the loan if the borrower makes a series of on-time payments. “Doing so is in cosigners’ interest because they will no longer be legally liable for the loan if the primary borrower defaults in the future,” the report says.