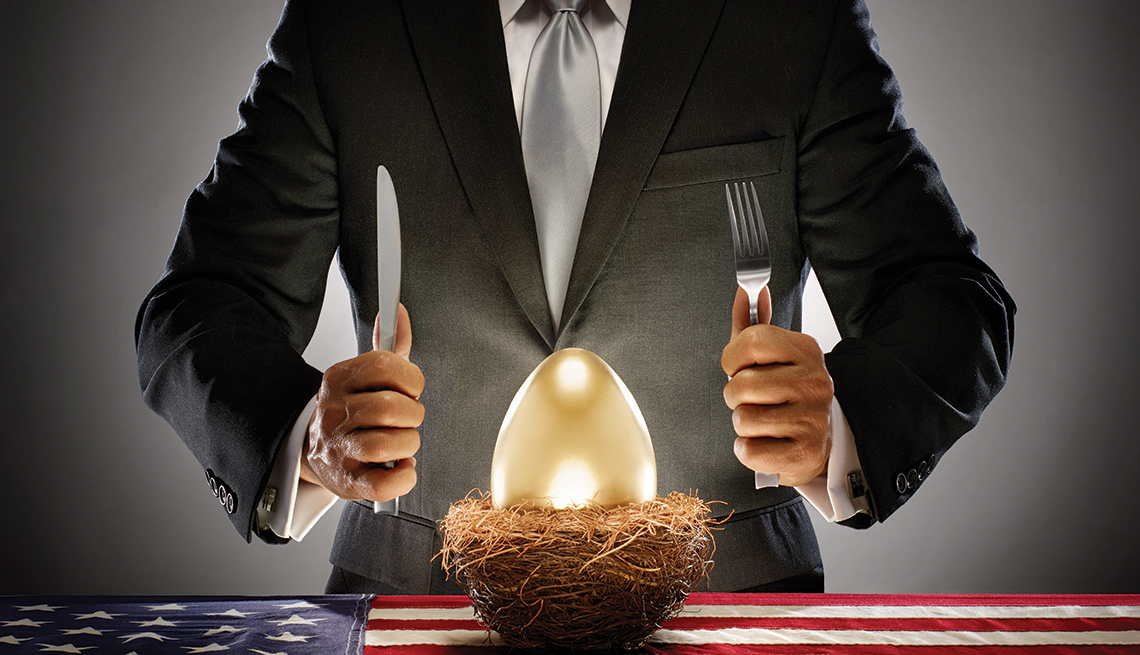 One form of pension poaching involves attorneys, financial planners and insurance agents trying to persuade veterans over 65 who have pensions to invest in insurance products.

En español | Daryl Henry, a disabled Navy retiree from Laurel, Md., was beset by bills. In 2003 he read an ad and arranged to get a cash advance in exchange for signing over almost all of his $1,083 monthly pension for eight years.

Henry, who spent 20 years in the Navy, agreed to pay a company associated with Structured Investments Co. of Southern California $1,070 a month in return for money upfront. The repayment cost for the $42,131 advance: $102,720.

Henry was named the lead plaintiff among 61 retirees in a suit against Structured Investments in 2005. A California Superior Court judge ruled in 2011 that the company's advances violated a federal law that forbids assignment or sale of military pensions. The judge ordered that people who were still paying could stop their payments and the retirees would be repaid nearly $3 million.

The victory was sweet, but brief. Within weeks, Structured Investments declared bankruptcy. None of the victims has received any restitution.

Robert Bramson, a Walnut Creek, Calif., attorney who filed Henry's suit, continues to work on the clients' behalf. He said he's already spent about $225,000 of his own money in legal fees and expenses, hoping they'll see some payment in the bankruptcy proceedings. "The business I'm in is to help people who are getting taken advantage of," Bramson said.

Henry is one of an unknown number of people who have signed over their pensions to a growing army of pension predators who go after veterans and other retirees who have a steady income stream. Smooth talkers encourage them to tap their future income for a cash lump sum now — often at an exorbitant cost.

The good news is that Congress and some states are beginning to go after those who prey on people with pensions. AARP supports efforts to license lenders and ensure that they comply with federal and state consumer disclosure laws, state small-loan interest rate caps and usury laws. AARP also has urged the federal Consumer Financial Protection Bureau to issue regulations "to eliminate unfair, deceptive and abusive practices in the alternative financial services industry." For now, though, people with pensions need to be their own first line of defense. Here's what you need to know to protect yourself.

Companies with patriotic-sounding names and flag-waving websites court military retirees as well as teachers, firefighters, police officers and others who have pensions. The hard-to-resist pitch: Convert part of tomorrow's pension income into cash today. The question is: What's the cost? Effective annual interest rates for pension loans can top 100 percent.

• Do the math. Figure out how much you will actually pay over time for the lump-sum amount.

• Know that federal law prohibits assigning military and some other government pensions to a third party. Pension poachers get around this rule by calling the lump sum payment an advance, not a loan.

Pension advances are a variation on payday loans — short-term loans, usually under $500, that come with sky-high interest rates. In contrast, pension advances typically run into the tens of thousands of dollars, and the repayment period can last more than three years. Contracts can be confusing.

Pension advance companies fly under the legal and regulatory radar by insisting they are not banks and therefore are not subject to truth-in-lending or usury laws. Although it is illegal for military and federal pensioners to assign or sell their pensions, companies skirt the law by having retirees deposit a hefty portion of their pensions into bank accounts controlled by the companies. The firms claim that the transactions are advances, not loans, and the payments aren't interest.

Mark Corbett, vice president of marketing at buyyourpension.com, said the term "loan" suggests that the money can be repaid early. A pension buyout customer who agrees to turn over a portion of his or her pension for six years has a firm commitment for six years.

"We buy income streams," he said. "Everything we do is completely legal and legitimate. We're completely transparent."

Corbett said business is booming and that he gets 30 to 50 calls a day from people who want cash for their pensions.

"The first thing I do is try to talk them out of it," he said. "It's expensive money. I tell them: 'Don't sell your pension unless you have a really good plan for the money.' "

If creditors are hounding you, here are 5 alternatives to pension loans:

1. Talk to creditors about a payment plan.

2. Get free credit counseling. Find a certified professional through the National Foundation for Credit Counseling.

3. Workers can ask about an interest-free salary advance.

4. Consider advances on credit cards. The interest rate could be lower than the pension loan rate.

5. Look into a military loan. Some companies offer loans to military retirees that are less than the pension loan rate.

Another form of pension poaching involves attorneys, financial planners and insurance agents trying to persuade veterans over 65 who have pensions to invest in insurance products so they can qualify for VA Aid and Attendance benefits that help pay for assistance with daily living tasks. Such actions prompted a stern warning last year from the Federal Trade Commission.

"What they don't reveal is that these transactions could mean that the veteran loses eligibility for Medicaid services or loses the use of their money for a long time. Adding insult to injury, the advisers are charging fees that range from hundreds to thousands of dollars for their services," the FTC warned.

Beverly Walsh was a retired schoolteacher in Lynnwood, Wash., who had served in the Navy in World War II. In 2006, an insurance agent who specialized in senior finances sold Walsh, then 81, a 10-year annuity valued at $215,000. In 2009 she bought a second annuity valued at $100,000. The agent also persuaded her to set up a trust so that she and her husband, an Army vet with Alzheimer's, could qualify for Medicaid and the Aid and Attendance benefit, in addition to obtaining a veteran's pension.

No applications for a pension, Medicaid or the Aid and Attendance benefit were ever filed, and no provisions were made for her or her husband's care.

The insurance agent "gained her trust over several years and then coerced her into making these financial decisions that she wasn't capable of understanding," said Beuthin, who had the pleasure of seeing the state fine the agent for financial misconduct in her aunt's case and revoke his license.

Beuthin was able to recover all of her aunt's money, but her aunt didn't live to see it. Beverly Walsh died last year at 88.

Washington Attorney General Bob Ferguson (D) proposes only a few laws every year. This year, one of the five he proposed was to protect veterans from what he calls "pension poachers."

"Aid & Attendance scams involve hucksters posing as investment 'advisers' who prey on vulnerable elderly veterans or their surviving spouses with the enticement of an untapped federal benefit," said a summary of the legislation prepared by his office.

In March, the Washington legislature passed a law, endorsed by AARP, which prohibits insurance agents from providing assistance to veterans in obtaining benefits that might lead to financial gain for the agent.

"We hope this acts as a deterrent," said Ferguson, whose father and uncles served in World War II. "We see a lot of crimes, but few are more egregious than those that try to scam our veterans."

In the past year, officials in several other states and on Capitol Hill have begun focusing on pension poaching.

• In Vermont, state Sen. Kevin Mullin (R) worked with AARP Vermont on a bill that passed unanimously in both houses of the legislature and was signed into law by Gov. Peter Shumlin (D) in April. It requires pension lenders to abide by the same banking and consumer protection regulations as other lenders — including a requirement that they be licensed.

"These schemes are usually very bad deals for the retirees," said Richard Cordray, head of the Consumer Financial Protection Bureau.

In the House, Rep. Matt Cartwright (D-Pa.) introduced the Annuity Safety and Security Under Reasonable Enforcement Act, known as ASSURE, last year with Rep. Gerry Connolly (D-Va.). Cartwright calls pension advance interest rates, ranging from 27 percent to 106 percent, "highway robbery." His bill would limit the interest rate on such loans to the prime rate plus 6 percent.

Thom Stoddert, 63, a Vietnam veteran in Olympia, Wash., and a writer for Veterans Voice, has devoted years to helping veterans avoid scams. "I come across these people who pretend they're advocates for veterans, but they're just making money," Stoddert said. "I didn't spend nights sleeping in the mud and cold, nor did I spend countless hours watching veterans and soldiers die, so those who never served could use us as a fountain for their greed."

Marsha Mercer is an independent journalist in Northern Virginia.