With nearly 900 farms, more than 70 percent of the land in Champaign County, Ohio, is used to grow crops.

What’s perceived as being a rural or remote community can differ greatly by region.

People living in the remote Mountain West might not consider the small towns of coastal Maine to be particularly rural. Life in the rural Midwest isn’t like life in the rural South or most anywhere in rural or frontier Alaska. 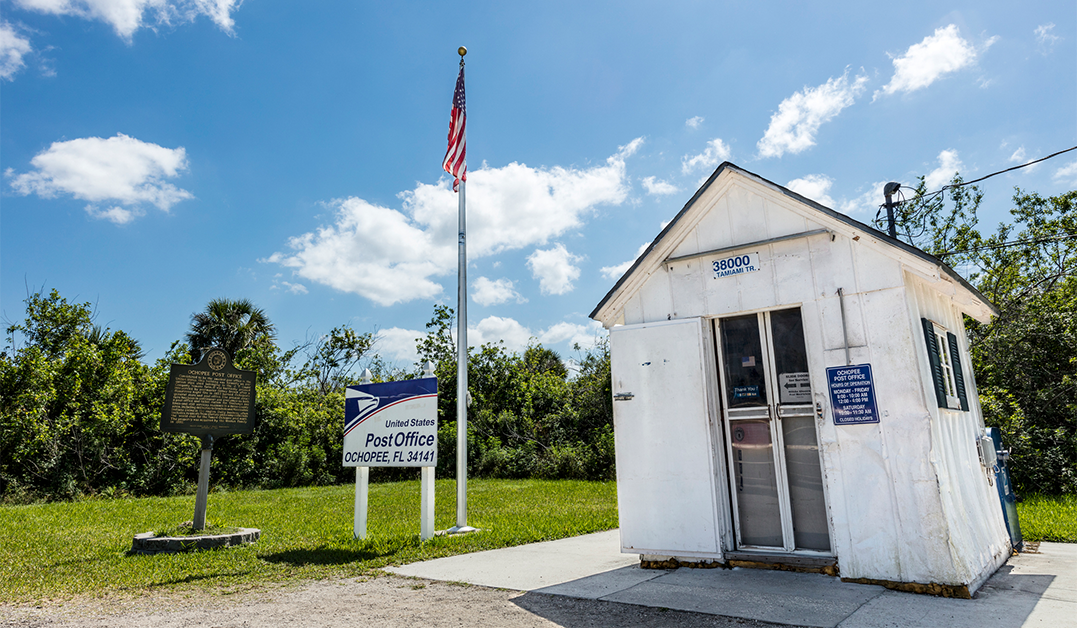 The tiny Ochopee Post Office (61.3 square feet) contains about 40 P.O. boxes. To deliver the mail, its letter carrier embarks on a more than 150-mile route.

Since many rural areas no longer have a local post office, the presence of one is essentially a confirmation that a community exists. Located in the Florida Everglades, the nation’s smallest post office (Ochopee 34141) serves about 300 residents.

So what qualifies a community as rural? The U.S. Department of Agriculture attempts to answer in an article titled “What is Rural?” “The existence of multiple rural definitions reflects the reality that rural and urban are multidimensional concepts. Sometimes population density is the defining concern, in other cases, it is geographic isolation. Small population size typically characterizes a rural place, but how small is rural? Population thresholds used to differentiate rural and urban communities range from 2,500 up to 50,000, depending on the definition.”

The definition used by the U.S. Office of Management and Budget is based on counties. “Metropolitan” regions include a core county with at least one densely populated urban area of 50,000 or more people, plus surrounding counties where at least 25 percent of residents work in the core county.

“Micropolitan" regions include a core county with at least one urban area that has a population of 10,000 to 49,000. All other areas are classified as “noncore.” (Some but not all noncore areas are rural.)

The U.S. Census Bureau defines rural as “all population, housing, and territory not included within an urbanized area or urban cluster.

As a result, the rural portion of the United States encompasses a wide variety of settlements, from densely settled small towns and ‘large-lot’ housing subdivisions on the fringes of urban areas, to more sparsely populated and remote areas.”

(In fact, most rural communities are clustered in the vicinity of urban areas, which has historically been the case “as rural populations resided on farms producing food and other goods for nearby urban centers or resided in small market and mill towns serving the needs of both surrounding rural populations as well as residents of nearby cities.”)

Additional definitions come out of other federal and state offices, the variations often based on the work being done or why the question is being asked. One way to achieve some location specific clarity is to use the Rural Health Information Hub's Am I Rural? tool.

Additional articles and a link to this page can be found at AARP.org/RuralLivability.