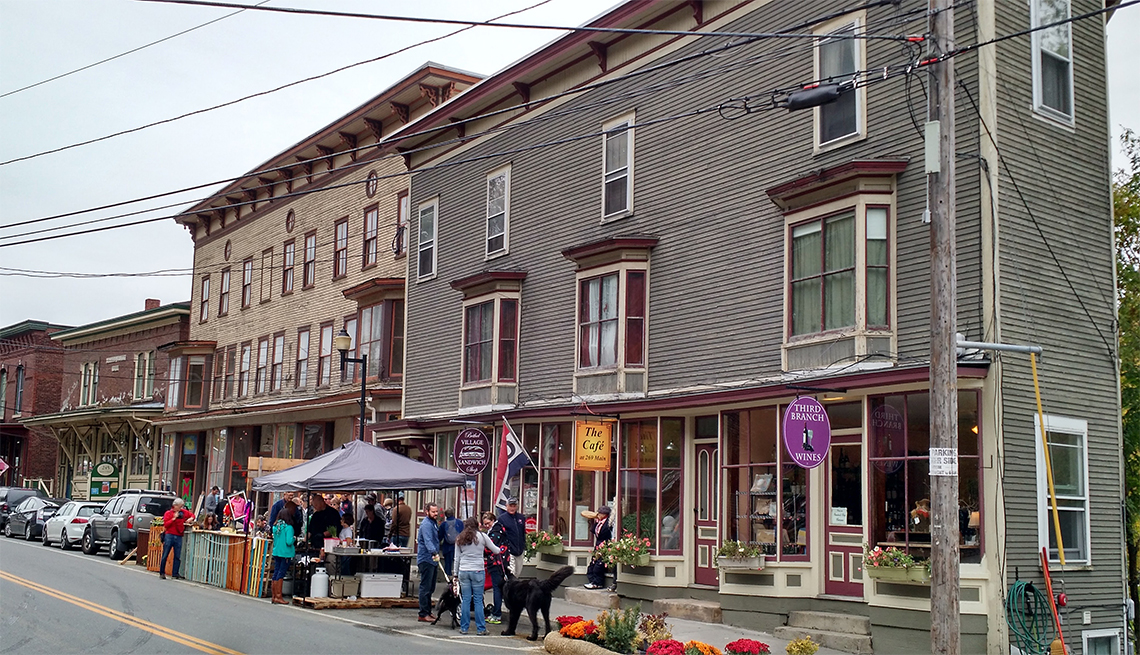 Don't miss the Bethel Better Block video at the end of this article.

Not all towns have the staffing, experience and resources needed to identify and take action on livability measures. Because of that, AARP Vermont piloted an alternative approach to improving livability by challenging communities to take immediate action using do-it-yourself methods pioneered by the Better Block Project.

In March 2016, AARP Vermont put out a request for proposals asking communities to submit an application to participate in a demonstration project in partnership with AARP and Team Better Block. The revitalization-focused project would temporarily transform a single block into a vibrant destination, thereby illustrating the potential for new businesses, safer streets and improved livability. 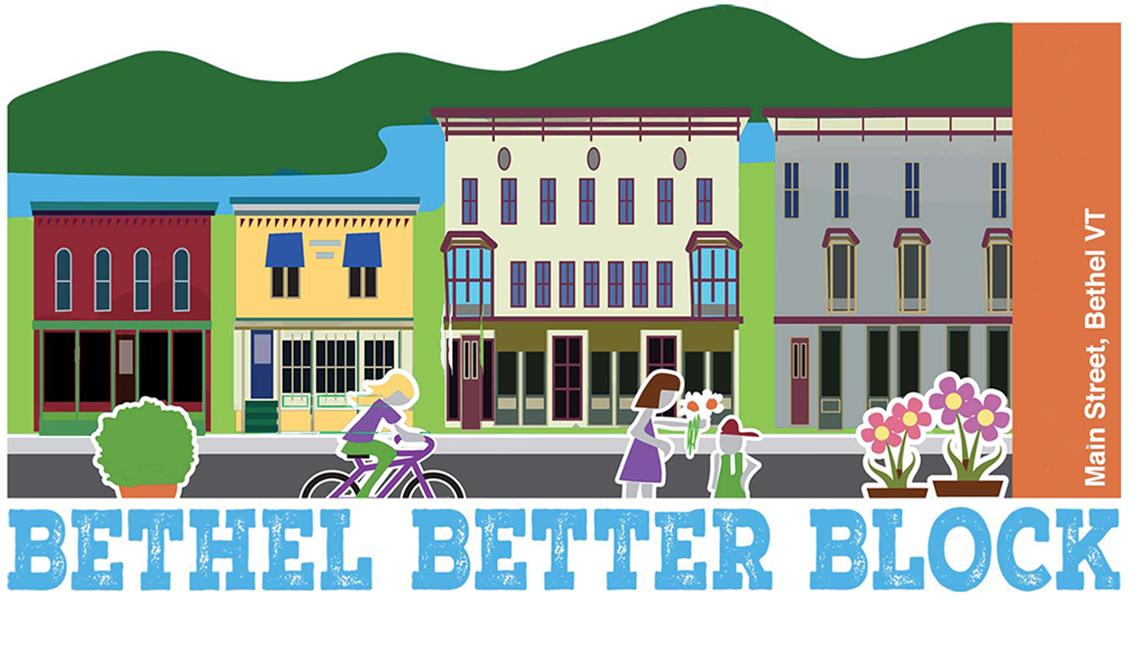 The opportunity was exactly right for Bethel, Vermont, at exactly the right time. A small rural town of just over 2,000 people (median age: 43), Bethel has a compact, historic downtown center and four additional village centers scattered across 45 square miles of hills and valleys in the Green Mountains of central Vermont.

Bethel was once a bustling industrial town, but over time the large employers dwindled, leaving empty storefronts and limited employment opportunities. Nearly 20 years ago, a downtown revitalization plan for Bethel called for a riverwalk, streetscaping, a renovated Town Hall, parking lot improvements, and more. Some of those elements were built; most were forgotten.

In 2011, Bethel hit a low point when Tropical Storm Irene devastated the downtown and surrounding community. After Irene, there was a sense that Bethel had little to offer. One critical success was an ad hoc community group called Bethel Revitalization Initiative, which describes itself as a "do-ocracy," meaning "people show up with good ideas and then do them."

At the time of Bethel's application to participate in the AARP project, five historic buildings and businesses in the community's core downtown block were for sale. Some of the buildings were vacant and in need of significant repairs. Investors were interested in the properties but hesitant to commit without a sense of the town's future possibilities. A Better Block demonstration would help townspeople and investors see and experience Bethel's potential in real life.

From Friday, September 30, to Sunday, October 2, 2016, a downtown block of Bethel's village was temporarily transformed by the following pop-up demonstration projects (the "recipes" for which can be found here): 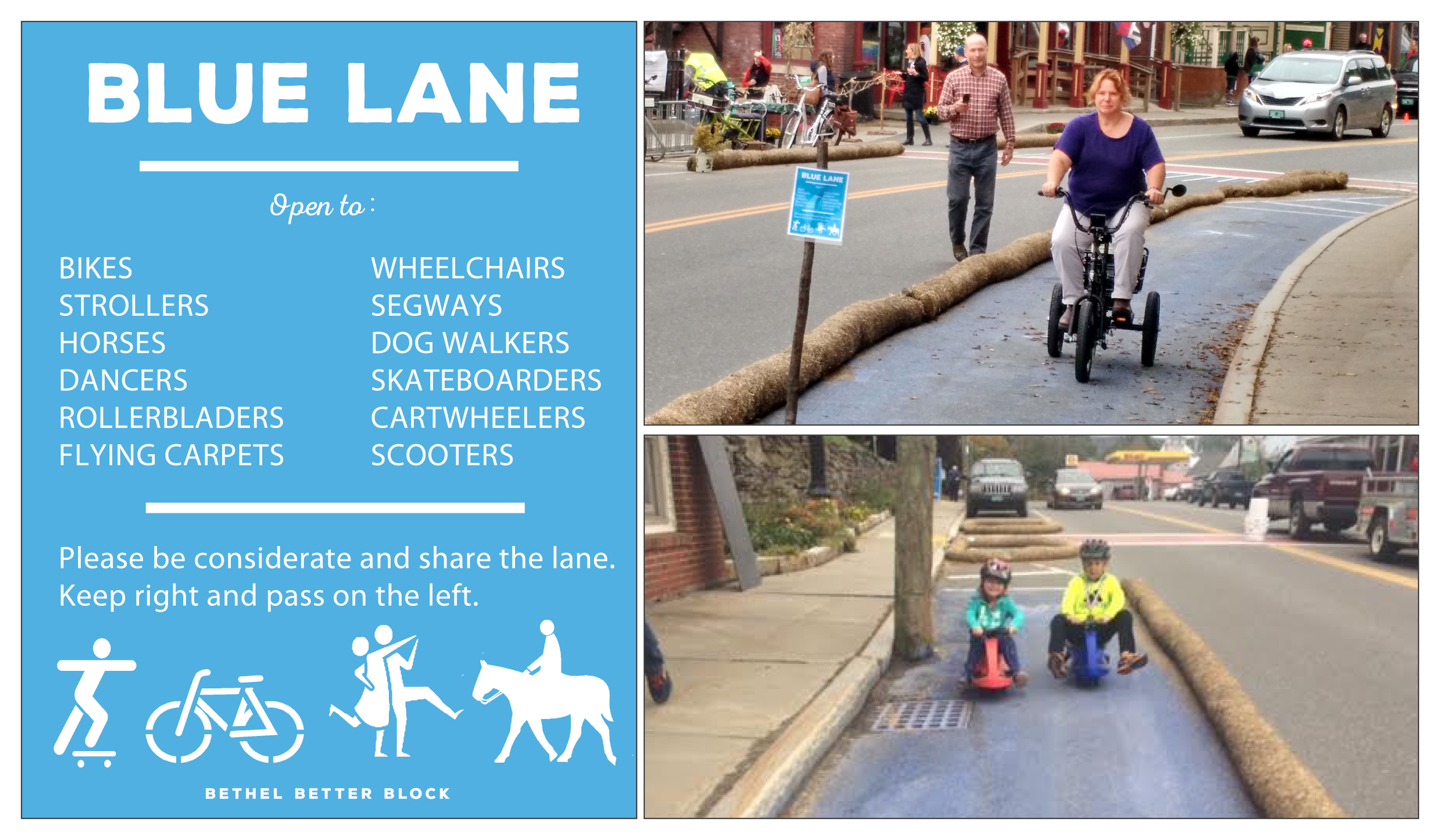 The Better Block Project promotes the use of simple modifications that can powerfully alter the economic, social, and ecological value of a community by gathering designers, community residents and volunteers together to create a weekend intervention.

The process takes a bottom-up approach to planning that allows community residents to be directly involved with the rapid build-out and construction of revitalization projects. The goal is to inspire and educate community leaders and residents to make streets safer and communities more vital and livable.

On-the-ground work between Bethel Revitalization Initiative volunteers, AARP and Team Better Block began with a June 2016 "Walk and Talk" during which residents pointed out favorite places, troubled spots, and areas where the town could use some improvement.

The Bethel Better Block weekend was executed by a core team of 25 volunteers and three staff members from AARP Vermont and Team Better Block. Materials, permits and insurance for the event cost about $4,000.

OUTCOMES and NEXT STEPS

In one weekend, Bethel's downtown came alive with hundreds of visitors. People waited excitedly in long lines for food at the pop-up taco stand. Families enjoyed new spaces for kids to play and socialize. Enhanced crosswalks and planters led to safer conditions for pedestrians. Local artists sold their wares in once vacant buildings. Visitors sat around an outdoor table in a new pocket park, formally an overgrown lot.

The pop-up shops demonstrated how retail and service-sector jobs could operate in Bethel. Within a year of the Better Block Bethel weekend:

The project was a tipping point for building enthusiasm and commitments to make Main Street Bethel thrive again.

Among the long-term results of the Better Block Bethel demonstration project:

Kelly Stoddard Poor is the associate state director of outreach for AARP Vermont.
Andrew Howard is an urban planner, cofounder of Better Block and principal at Team Better Block.