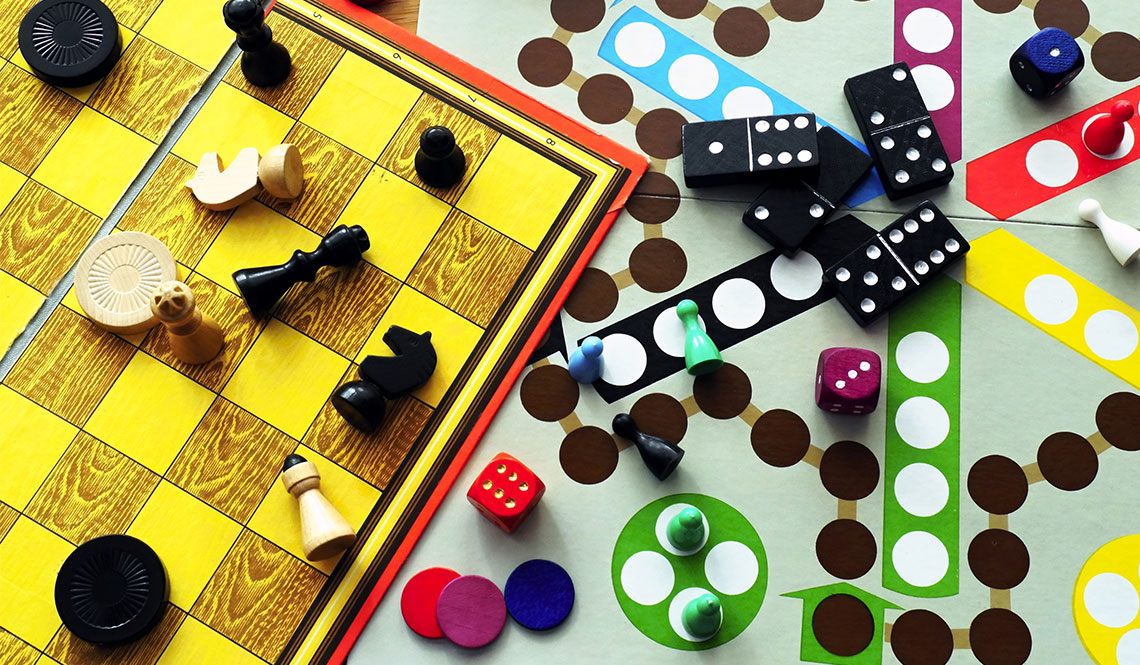 Board game cafes enable people of all ages to play games at a table, with one another, instead of on a television, computer, arcade or smartphone screen.

On Sunday afternoons, before settling into another week of work, Sam Robertson often joins forces with pals to fight dangerous, shifting diseases worldwide. But just for a few hours.

Robertson's laboratory is locally known as Cardboard Crowns, a Dayton, Ohio, board game cafe, and he's playing a game called Pandemic Legacy. "I like the cooperative aspect," he says. "It lets us overcome a challenge, and every mission is different."

Board game cafes are popping up throughout the nation as safe places for people of all ages to gather and play any of hundreds of games. At Cardboard Crowns, as at other cafes, staff can recommend games based on what customers enjoy, how many are in the group, their ages and the amount of time they have to play.

Entrance fees are typically $5 per person on weekdays, sometimes more on weekends or in large cities. Some cafes offer discounts for members or cafe guests who order a certain amount from the menu. Sometimes there’s a reservation charge or, as at Cardboard Crowns, a $10 fee to upgrade from a table to a booth that seats six adults or up to eight including kids. 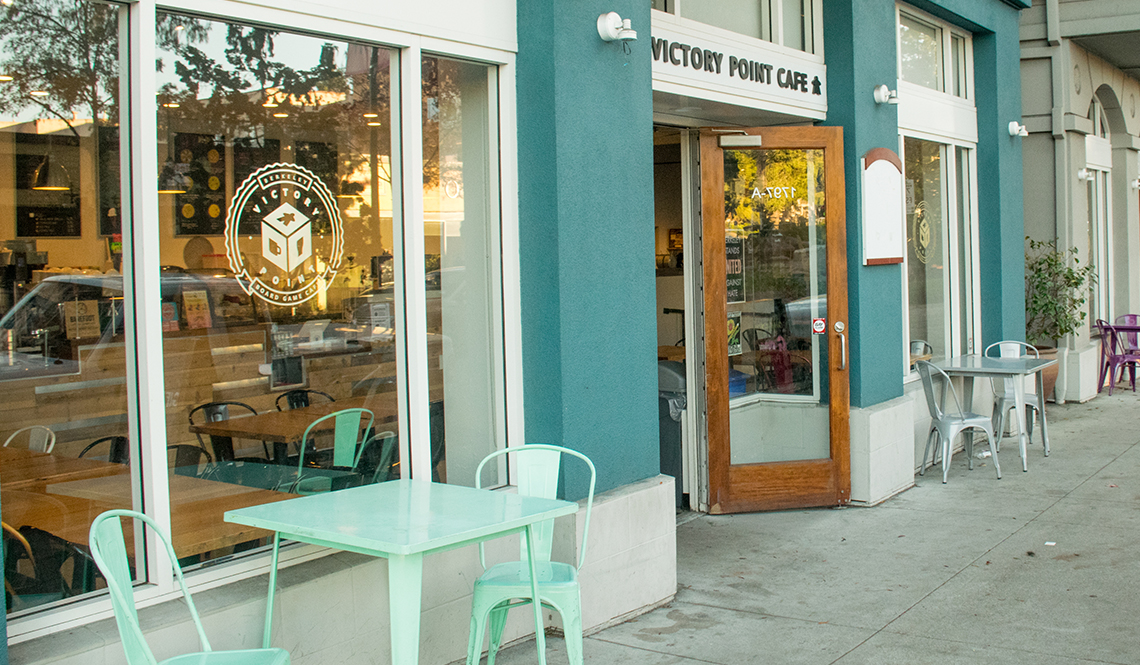 The Victory Point Cafe in Berkeley, California, is open for food and games from as early as 8 a.m. until midnight.

In his book The Great Good Place: Cafes, Coffee Shops, Bookstores, Bars, Hair Salons, and Other Hangouts at the Heart of a Community, author Ray Oldenburg, an urban sociologist, wrote that people and societies need a third place to gather besides home and work. Board game cafes can be that third place for people who enjoy meeting friends, family, or colleagues to share food and fun.

Cardboard Crowns owner Ben Adams stocks nearly 900 unique games to appeal to a range of tastes. Newcomers look for classic Americana: Scrabble, Life, Connect 4. Larger groups tend to choose party games like Cards Against Humanity and Telestrations, which is a cross between the message-passing game telephone and Pictionary. Fathers and sons can spend intense hours playing Terraforming Mars, a popular choice since it came out in 2016. Couples look for games labeled as good for two, such as Battleship and Patchwork.

One reason board game cafes have taken off is that board games themselves have improved from the heyday of Monopoly and Candy Land.

"A lot have taken away the player-elimination aspect," explains Adams. "They're also less random, and a lot more put control back into people's hands with dynamic and unique choices" rather than simply a roll of the dice. 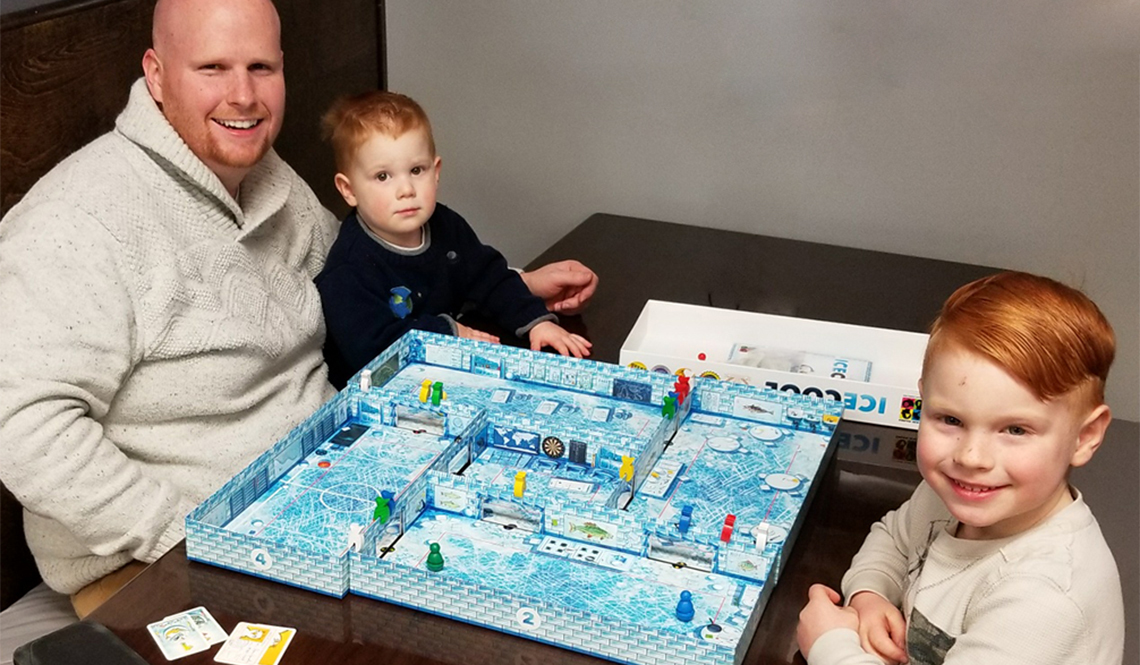 A dad and his sons play Ice Cool at the Cardboard Crowns board game cafe in Dayton, Ohio.

Plus, there's less direct conflict in many games. Rather than tear down a competitor, as in Monopoly, players are building their own resources on their own land, business, or journey. A subgenre, cooperative games, has players pooling talents to beat the game itself.

There’s also the company. Elana Auerbach, her husband Bill Press and their elementary school-age son are frequent guests of Victory Point Cafe in Berkeley, California. "It's rare to have a place that's such a mix of generations all enjoying themselves, a lot of different people together," says Press, explaining that the shop attracts a mix of students, retirees and families.

Although some cafes cater to fans of role-playing games such as Magic the Gathering, and others target a family audience, most try to be inclusive of all ages and interests — from the game selection to the menu.

Continuing the "third place" idea, board game cafes often offer a menu featuring locally-sourced food and drinks in order to support the region and attract support in return. Cardboard Crowns, where roughly one out of five guests are under 18, has a kids menu. The menu at Board Game Republic in Denver, Colorado, changes seasonally and offers such refined fare as garlic roast sweet potatoes with rosemary and pecans along with plenty of local IPAs and ales.

"We call ourselves a social gaming house with a bar and restaurant," says co-owner Keith Meyers.

In Berkeley, Auerbach and Press appreciate supporting a local business by spending time at Victory Point. Plus, the cafe's choice of board games is far larger than the collection they could ever own themselves. This "try before you buy" factor is a draw for serious gamers, says Victory Point co-owner Areg Maghakian.

And like many players, Robertson likes the chance to get away from cell phones for a while and socialize the old-fashioned way. "If we want to open the group to 10 or 12 people, we can," he says. "You get to know everyone better. It's just fun."

Games for All Ages

Board games fall into several broad categories: party games, kids’ games, light to heavy strategy, role-playing games, and so on. Besides classics like chess and Go, favorites that appeal to multiple age groups include:

Ellen Ryan is a Maryland-based freelance writer and editor. She has written for AARP the Magazine and for The Washingtonian, where she served as the magazine's managing editor.

See Also: Shuffleball Is So Yesterday >