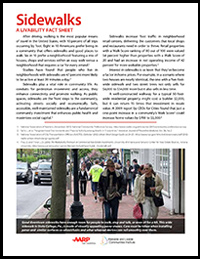 Download the fact sheet Sidewalks to learn how sidewalks help improve towns and cities for people of all ages.

Sidewalks play a vital role in community life. As conduits for pedestrian movement and access, they enhance connectivity and promote walking. As public spaces, sidewalks are the front steps to a community, activating streets both socially and economically.

It makes little sense that in so many neighborhoods, sidewalks are rare and even non-existent.

Among the benefits of sidewalks:

While having a sidewalk is generally better than not having a sidewalk (provided the sidewalk in question is in good repair), certain types of sidewalks are better than others, and a sidewalk's width is key. In busy downtown neighborhoods that have lots of people, destinations and potential conflicts with vehicles, sidewalks need to be wide enough to handle foot traffic and community features such as cafe seating, benches and other spots for socializing.

A width of at least eight to 12 feet is the typical recommendation for downtown settings while a five to seven foot expanse is usually more than enough in a residential area.

Among the authors' recommendations: Since sidewalks are a public benefit, rather than require property owners to pay for and clear sidewalks (snow, ice, etc.) themselves, a better policy would be to install and maintain sidewalks with public funds.

The fact sheet highlights three sidewalk policy success stories, including an especially inspiring effort in Calloway County, Kentucky, where walking or bicycling to school was prohibited in and around the small city of Murray because there were no sidewalks and it wasn’t a safe way to travel. The local government offered to build sidewalks if the school system would change the policy. The effort resulted in 15,960 feet of sidewalks, including from the county middle school to a low-income housing area. Hundreds of students now regularly walk to school.

“Every time I look down the street, there are people on the sidewalks, people pulling wagons, people walking their dogs,” said a school district administrator.

The Sidewalks fact sheet can be used by policy makers, transportation planners, community leaders and citizen activists to educate themselves and others about the neigborhood benefits of sidewalk connected streets and neighborhoods.

The page "How to Get it Right" offers steps advocates and community leaders can take to encourage the inclusion of sidewalks in development and redevelopment planning.