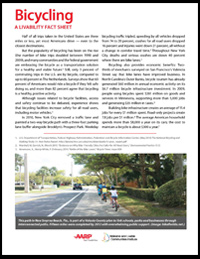 Download the Bicycling fact sheet to learn how bicycling helps improve towns and cities for people of all ages.

Half of all trips taken in the United States are three miles or less, yet most Americans drive — even to the closest destinations. Only 3 percent of commuting trips in the U.S. are by bicycle, compared to up to 60 percent in The Netherlands.

Still, it’s not unreasonable to believe we can improve our numbers, especially since the popularity of bicycling has been on the rise. The number of bike trips doubled between 1990 and 2009, and many communities and the federal government are embracing the bicycle as a transportation solution for a healthy and viable future

The authors address various myths about bicycles. Here are a few:

There were no bicycling fatalities in bicycle-friendly Portland, Oregon, in 2013 even though bicycling accounts for at least 6 percent of all trips. By comparison, 21 people were killed while driving or riding in a motor vehicle in Portland that same year.

After the installation of protected bike lanes on New York City’s 8th and 9th avenues in the fall of 2007, retail sales increased 49 percent in those areas compared to 3 percent in the rest of Manhattan.

The "Bicycling" fact sheet can be used by policy makers, transportation planners, community leaders and citizen activists to educate themselves and others about the neighborhood benefits of bicycling.

The page "How to Get it Right" offers steps advocates and community leaders can take to encourage bicycling and bicycle-friendly streets and places.

Starting small, such as by striping a bike lane in an area with high bicycling potential, is one doable option. Larger scale efforts can include establishing a short-term bicycle rental or "bike share" program, such as those now up and running in places including New York City, Washington, D.C., and Paris, France.