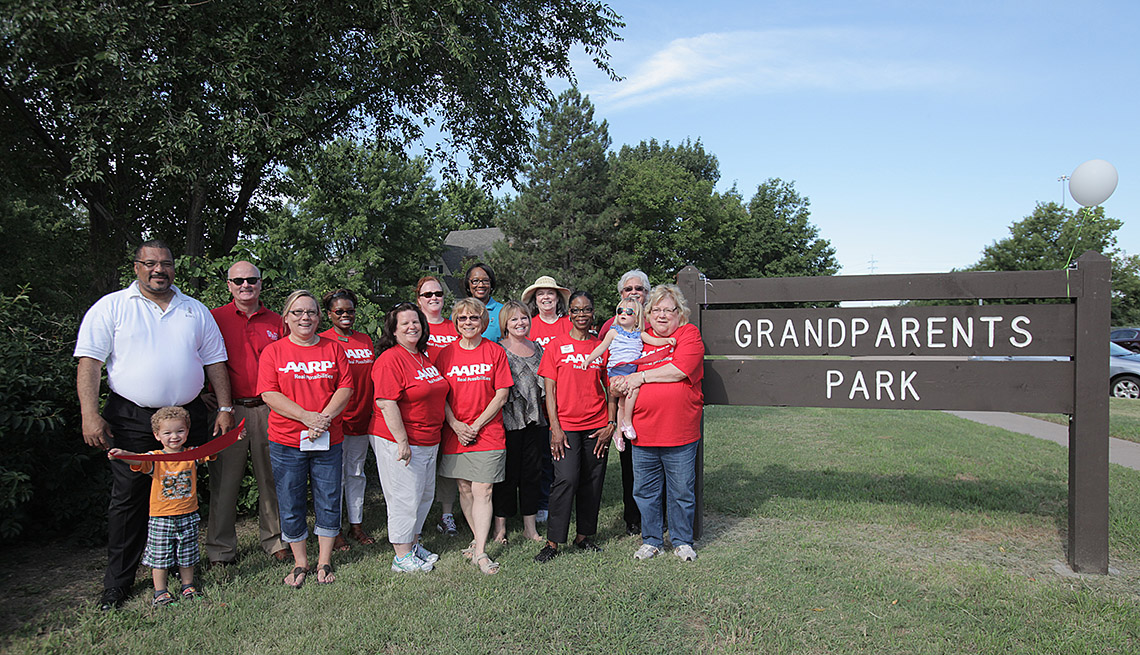 Residents, AARP staff and volunteers gather on opening day of the Grandparents Park in Wichita, Kansas

The City of Wichita had been maintaining two adjoining, empty lots within the Tri-S neighborhood and agreed to donate the land for the Grandparents Park. The lot size is 0.56 acres, which measures out as 280 feet by 100 feet. The park is easy to access from all parts of the neighborhood by foot, bicycle, stroller or car.

Why and For Whom

The Tri-S neighborhood is located next to a highway bypass. Residents didn’t have a place to walk or play in their neighborhood, other than on old sidewalks that are in various states of repair. The empty lots were an eyesore and a waste of space.

Since the area is home to numerous older residents, many of whom care for grandchildren during the day, the park project was seen as a way for adults to get exercise while providing a fun outdoor activity for children.

Grandparents Park houses an exercise station (called the LifeTrail Advance Wellness System) that is geared toward people age 50 and older. A playground for children, built by Landscape Structures, was installed by the Kansas-based recreation contractor Athco LLC. In addition, there’s a paved walking trail, park benches, trash cans, landscaping and a newly installed drinking fountain. The park also has a sign designating it as the "Grandparents Park."

A street and a sidewalk wrap around three sides of the park, which is easily accessible from all parts of the neighborhood. There’s a fence along the south side of the park, dividing it from the neighboring homes. On-street parking is available nearby.

AARP Kansas coordinated the project’s partnership groups, which included the Central Plains Area Agency on Aging, the Older Adult Alliance and the City of Wichita. The city’s work involved its planning department, parks and recreation department, the office of Mayor Carl Brewer and that of LaVonta Williams, who represents the neighborhood and surrounding community on the Wichita City Council.

The two empty lots used for the Grandparents Park were donated by the city. The installation of the walking trail and the cost and installation of the exercise equipment, drinking fountain, benches, signage and fence came to $21,850. (This total does not include the cost of bringing expert Dan Burden to Wichita, his written report or any of the expenses associated with community meetings or the groundbreaking and opening celebration for the park.)

Most of the expenses were covered by AARP Kansas, which funded the project as part of its livable community work in Wichita. An additional $1,000 was provided by neighboring business Ben Franklin Plumbing. Other local businesses contributed money or in-kind goods for the opening day celebration.

Grandparents Park is getting lots of use from neighborhood residents. By all accounts it’s a popular place and very much appreciated — especially by grandparents.

Since the City of Wichita maintains the park (just as it did the empty lots) there are no ongoing costs. Residents use the park to walk their dogs, play with their children and grandchildren, exercise and enjoy the outdoors. At the time of the park dedication residents started a walking program, which continues to meet regularly. At this time there are no plans to add additional equipment to the park.

The City of Wichita (and especially the planning department, which suggested the neighborhood, and the parks and recreation department, which coordinated the park’s development) was instrumental in working with AARP to make the park a reality. Councilwoman Williams was a champion of the park’s success along with Mayor Brewer. Of course the park could not have happened without the neighborhood’s residents and especially those who stepped forward as leaders to determine what needed to be done to make their community a better place for people of all ages.