There are few things more basic to human life than walking.

We lost sight of this fact over recent decades, building new communities all over the world where moving on foot is dangerous or unappealing — if not downright impossible. That’s beginning to change.

“The wind is behind our sails,” says Kate Kraft, a public health expert working with two of the organizations helping lead the walking movement: the Every Body Walk! Collaborative and America Walks. But Kraft goes on to note that “it took 80 years to make America unwalkable, and it will take a lot of work to make it walkable again.”

A Kaiser Permanente survey of Americans’ attitudes about walking accentuates this challenge. A huge majority of adults acknowledges that walking is good for them, but they also admit that they should walk more (79 percent) and that their children should walk more (73 percent). Only 11 percent say they meet the federal Centers for Disease Control and Prevention’s recommendation that people walk for a minimum of 30 minutes a day, five days a week.

Common reasons cited in the survey for not walking include:

While the challenges are very real, a flurry of new initiatives, ideas, programs and policies instill the walking movement with high hopes. Here (in a non-ranking order), some of the promising efforts now underway to get Americans back on their feet:

Every year, nearly 5,000 Americans are killed crossing the street. There’s hope that will change now that Oregon, New York City, San Francisco and other communities are implementing Vision Zero campaigns to reduce traffic deaths through street improvements, law enforcement and public education.  Similar policies in Sweden cut pedestrian deaths in half over the past five years — and they reduced overall traffic fatalities at the same rate. “Vision Zero is the next big thinking for walking,” says Alliance for Biking & Walking President Jeff Miller.

AARP staff and volunteers team up with walkability expert Dan Burden (back row, third from right) to conduct a walk audit in Lincoln, Rhode Island.

In September 2014, Anthony Foxx, the U.S. Secretary of Transportation, announced an all-out effort to apply the department’s resources to boost bike and pedestrian safety the same as they do for auto and airline safety. Secretary Foxx — formerly the mayor of Charlotte, North Carolina — notes that pedestrian deaths rose six percent since 2009. One thrust of the Department of Transportation's Action Plan on Bike and Pedestrian Safety will be to design changes to streets in order to discourage speeding and other dangerous driving. “For years the message that bicyclists and pedestrians have been given is: You are responsible for your own safety. Walk at your own risk. Bike at your risk,” Foxx told a cheering crowd at the Pro Walk/Pro Bike/Pro Place conference in Pittsburgh this fall. But it’s a new era now, he promised. “Bicycling and walking is as important as any other form of transportation.”

It’s a quite simple idea: All streets should offer safe, convenient and comfortable travel for everyone — pedestrians, bicyclists, public transit users, people in wheelchairs, young people and old. Twenty-seven states and 625 local communities across the U.S. have adopted Complete Streets policies in some form. There is no one uniform design. Bike lanes, sidewalks, traffic calming, special bus lanes, median islands, enhanced crosswalks, improved crossing signals, curb extensions, narrow auto lanes, roundabouts and road diets are among the innovations that have been adopted in many places.

4. Communities for People of All Ages

The mark of a great community is whether you’d feel comfortable letting your 80-year-old grandmother or eight-year-old son walk to a nearby park or business district, says Gil Penalosa, former park director of Bogota, Colombia, explaining why he founded 8-80 Cities. Too many young and older people today live under virtual house arrest, unable to get anywhere on their own because driving is the only way to go. This has become a major initiative for AARP, which works at the community level to help conduct walk audits (see the next item) and nationally to advocate for Complete Streets and inform policy makers, planners and elected officials about how the increasing age of the U.S. population calls for more livable, walkable communities.

A deceptively simple idea, walk audits bring citizens and public officials together to assess the safety and convenience of walking in a particular locale. “They can really change how people look at a place,” says walkability expert Dan Burden, co-founder of the Walkable and Livable Communities Institute (WALC), a frequent AARP consultant (see photo on the previous page) and now the director of innovation at Blue Zones. Burden hit upon the walk audit idea in 1984 when a group of traffic engineers in Florida laughed at his question about how it would feel to cross the street at a harrowing intersection. “We’d never walk here,” they replied. But when they did, Burden remembers, “the street was immediately torn up and they started over.” This is a key tool to create what Burden calls community-driven planning, where the people living in a neighborhood have a big say in what happens there. 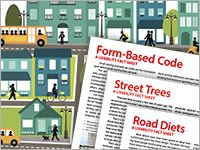 Half of children age 14 and younger walked or biked to school in 1969.  Now it’s less than 15 percent. Safe Routes to School campaigns work with families, schools and community officials to identify and eliminate barriers that block kids from getting to school under their own power. “We’re finding that the best interventions include both infrastructure improvements and programming. You put the sidewalks in but also get parents involved,” explains Margo Pedroso, deputy director of the Safe Routes to Schools National Partnership. A five-year study of 800 schools in Texas, Florida, Oregon and Washington, D.C., found a 43 percent rise in walking and biking by using this strategy.

7. Walking as a Basic Human Right

Walking has been shown to optimize people’s health and strengthen communities, which means everyone should have equal opportunity to do it. But low-income people often find it difficult or dangerous to take a walk in their neighborhoods, which often lack sidewalks and other basic infrastructure. Studies show that pedestrians in poor neighborhoods are up to four times more likely to be injured in traffic accidents. Fear of crime is another factor that keeps people from walking. “Is everybody welcome to walk?” is a question we need to ask, said the NAACP’s Shavon Arline-Bradley at the 2013 National Walking Summit.

8. The Healing Properties of Nature and the Outdoors

Not all exercise offers the same health benefits. A growing body of research shows that outdoor physical activity, especially in nature, boosts health, improves concentration and may speed up natural healing processes. That means a walk in the park is not only more interesting than a workout at the gym, it may be healthier, too. The Wingspread Declaration — recently signed by 30 of America’s leading health officials, researchers and non-profit leaders — calls for business, government and the health care sector to step up efforts to reconnect people with nature.

There’s an initiative afoot to encourage health care professionals to chart patients’ physical activity the same as they do weight, blood pressure, smoking and family health. The idea has already caught on with number of health care providers across the country. Ascension Health, Kaiser Permanente, Group Health (in Washington state) and Greenville Health System (in South Carolina) are among the health providers already doing it.

Walking has the lowest dropout rate of any physical activity, which is why Ohio cardiologist David Sabgir started Walk with a Doc to sponsor events where people can talk to a health care professional while out walking. Walk with a Doc now operates in more than three dozen states.

Many people are so out of practice as walkers, they don’t realize how convenient walking is. That’s why architecture student Matt Tamasulo posted signs in Raleigh, North Carolina, explaining that key destinations were just a few minutes away by foot. The city soon embraced his guerrilla campaign, and official walk-wayfinding signs are now found around town. Tamasulo has since launched Walk [Your City] to help other communities show how easy it is for people to get around on their own two feet.

By nature, Americans are full of aspiration, always pushing themselves to do bigger things. Walking, for all its social and health benefits, can seem pedestrian to some people. That’s why certified fitness and walking coach Michele Stanten promotes the idea of walking marathons: to give walkers something big to aim and train for.

“Walking is still not seen to be as sexy as biking,” says Robert Ping, program manager for WALC. “We need to focus more on walking as recreation — the stroll through the neighborhood after dinner, going around the block, walking down to the park, meeting your neighbors, something that’s not only utilitarian and good for the environment, but that’s also fun!”

Jay Walljasper writes, speaks, edits and consults about creating stronger, more vital communities. He is author of The Great Neighborhood Book and All That We Share: A Field Guide to the Commons. Visit him at jaywalljasper.com. This article is adapted from one written for the Every Body Walk! Collaborative, of which AARP is a member.

A livable "show and tell."