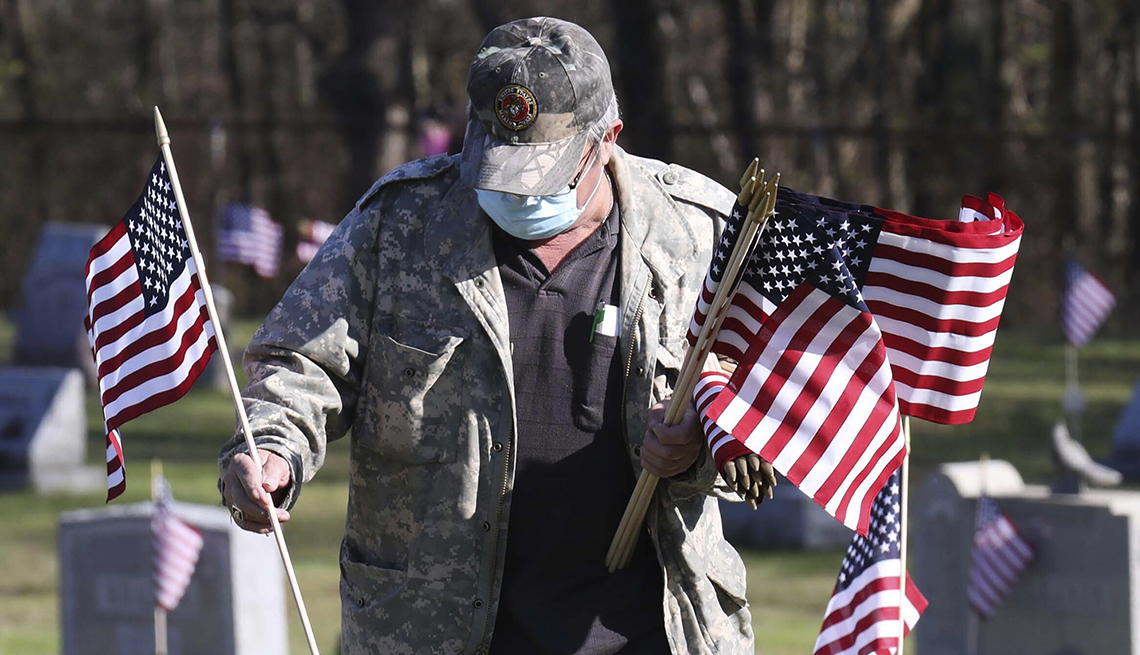 Veteran Joseph O'Hara moves to place a flag on a veteran's grave at the Holy Mother of Sorrows Cemetery in Dupont, Pennsylvania.

The COVID-19 pandemic has upended life as we know it, forcing us to alter our behavior for the sake of public health. Memorial Day is no exception. Although most parades and public events have been cancelled for this year's Memorial Day, there are still ways to honor service members who lost their lives. We compiled a list of events and services that can help you observe the holiday from home or within your community.

American Legion: Although most in-person Memorial Day parades and events are cancelled, some posts are providing virtual options ahead of the holiday. Check with your local post to see what is scheduled. American Legion members can share how they honor Memorial Day by submitting a post.

AMVETS Rolling to Remember: The organization is asking for participants to sign up, download its app and ride 22 miles on Sunday, May 24 (or donate $22 to support their cause). The group advocates for prisoners of war, those missing in action and lives lost to veteran suicide.

Arlington National Cemetery: The grounds in Virginia will be open to family-pass holders only during Memorial Day weekend. Visitors must wear face coverings at all times and maintain six-foot distancing. Throughout the weekend, the cemetery will produce multimedia virtual presentations on its website or social media.

National Memorial Day Concert: The concert will feature musical performances, documentary footage and readings that honor military service. The live broadcast will be on PBS and on display for troops around the world on the American Forces Network on Sunday, May 24, from 8-9:30 p.m. ET.

National Veterans Memorial and Museum Virtual Run/Walk: The Ohio museum is hosting virtual 1-mile, 5k and 10k runs or walks in honor of the lives lost during military service. Registration is open through Memorial Day and a portion of each entry fee will benefit the museum.

StoryCorps Military Voice Initiative: The platform provides veterans, service members and military families a place to share their stories. The goal is to honor their voices and amplify their experiences for the nation to listen. Previously recorded interviews are also available on their web page.

Veteran Affairs’ Cemeteries: VA cemeteries will be open for public visitation on Memorial Day. However, wreath-laying ceremonies, accompanied by a moment of silence and the playing of “Taps,” will not be open to the public. Online tributes can be made at the Veterans Legacy Memorial; a page exists for each veteran and service member interred in a VA national cemetery.

Veterans of Foreign Wars Flags: Ace Hardware, in collaboration with the VFW, is giving out 1 million American flags nationwide on Saturday, May 23. Customers who visit a participating store will receive a free flag while a second flag will be donated to a local VFW Post to be used for marking veteran graves on Memorial Day.

Virtual Tours of U.S. Veterans and War Memorials: Since most travel has been put on pause, Google Arts and Culture has compiled a virtual tour of our nation's most recognized memorials in Washington, D.C.

Vietnam Veterans Memorial Fund Commemoration: On Memorial Day, the organization will host a virtual commemoration from 1-2 p.m. ET. Until then, the public is being asked to write a personal message to share about who they will be remembering this Memorial Day. Video messages can also be recorded and shared. On Monday, May 25, at 10 a.m. ET, the annual Remembrance Ceremony on Facebook featuring special messages and remarks will take place.