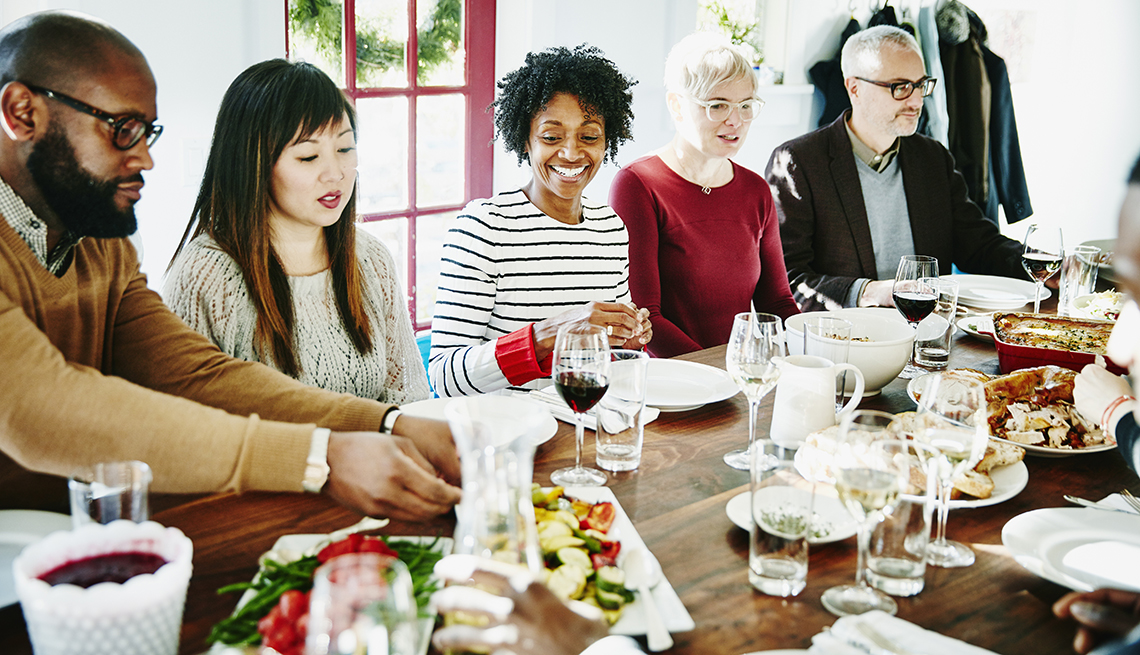 En español | Next week, we’ll celebrate the most family-centric of holidays, the one where everyone comes “over the river and through the woods” (via stop-and-go traffic) to arrive with the same story about why they’re 40 minutes late.

And here’s another universally shared predicament on Thanksgiving:

If your home is either the annual destination or just this year’s familial rendezvous, congratulations, you have the dubious pleasure of cooking the festive meal. Even confident cooks may wince at the idea of traditional Thanksgiving, because when was the last time you roasted a turkey, served cranberry sauce, shoved marshmallows onto sweet potatoes or scooped out pie filling from a pumpkin? Even more deflating, how many of the guests at your table are craving turkey? No wonder the highest praise you can hope for is, “Gee, Aunt Blanche, this turkey isn’t nearly as dry as Aunt Doris’.”

In heartfelt hope of preventing your impending madness, and provoking a more intense and authentic round of compliments, I offer two solid solutions for this holiday that evokes love, and dread:

Forget the bird. Instead, serve the dishes you love to cook and are proud to serve, as well as the ones your family appreciates. I haven’t served turkey in years. My coffee-crusted prime rib anchors our table and my family’s so delighted to dive into their favorite roast, I have to order double portions.

So that you may deflect anyone accusing you of cultural blasphemy, it is documented that at the first Thanksgiving in Plymouth pilgrims ate duck, pheasant and goose, which were far more plentiful than turkey. They also dined on venison, shrimp, mussels, fish, beans, squash, corn and watercress. They did not have potatoes of any kind, nor did they have pie. Ancient Egyptians ate marshmallows; the Pilgrims had none.

Therefore, you are hereby freed to make leg of lamb or roast salmon, or if you’re known for a killer lasagna and swoon-worthy coconut cake, bake them early because they are readily freezable, then thaw them the day before you need them.

As for those of you who either can’t really cook or hate to — don’t. Go online and discover the staggering selection of quality edibles that are available at reasonable prices and can be delivered long before your driveway fills up. Should this be your option, exercise it without apology. If the food you serve is good, it won’t matter where it came from. Remember, the Pilgrims ate what was available and were grateful. We have so much more available; take advantage of it. What better reason do you need to give thanks?

Go with the bird, but do it right.  Here’s an eight-step turkey recipe that’s more than moist, it’s delicious. It’s not difficult, just different, but try this once, and you may actually cook it on a day when Macy’s doesn’t have a parade.

Regardless of how many people are at your table, do not buy a turkey larger than 12 or 13 pounds. A 20-pound bird guarantees failure because it always takes forever to cook, especially the legs and thigh, and the longer meat roasts not in liquid, the tougher it gets. Buy two smaller turkeys if needed. If you have access, order ahead and buy fresh ones. They’re not as hard to find anymore.

Do not prep your turkey or put it in the oven when cold. Americans are so programmed to think that if food doesn’t go right from fridge to fry pan, it’s time to online search for salmonella cures. However, this isn’t tuna salad left out in the August sun. Take the fresh bird out of the fridge, and leave it be until it’s room temperature (about an hour).  If it’s frozen, submerge, in its original wrapping, in cold water. Allow 30 minutes per pound to thaw.

Set your oven to 425 degrees. Use a knife to partially separate the legs from the body of the turkey. This will speed up cooking time.

Do not put your stuffing into the cavity of the bird or in a separate side dish. Instead, take a spatula and gently insert the stuffing between the skin of one breast and the meat beneath. When the soft part of the spatula has made its way in, start using your hand, working your way through slowly (so you don’t tear the skin) to the other end of the bird. Repeat on the other side. With both breasts separated from skin, insert your stuffing inside these pockets until they are full. Shape the stuffing from the outside to mimic the contours of the bird.

Not only will the moisture in your stuffing (if your recipe uses only dry ingredients, switch it, because nobody will want it anyway) act as an automatic baster, but this new layer will slow the cooking time of breast meat to match the slower cooking dark meat of leg and thigh. It’s also going to make your turkey look a heckuva lot bigger.

Take one or two navel oranges and heat them in the microwave for a few minutes. Remove them, stab the fruit all over with a fork and insert it and two sprigs of rosemary into the empty turkey cavity.

Wrap twine around the legs (optional). Rub the outside of the turkey with olive oil, then salt and pepper the skin.

Do not start carving the moment the bird’s out of the oven. Turkey’s flavor is subtle. Served hot, it tastes bland. Let the roast sit out of the oven but under the foil for 20 minutes.

Nothing will ruin your earnest efforts to serve a fabulous looking and tasting turkey faster than a dull knife. Invest in a sharp carver. It’s worth it. No need to remove stuffing. Just slice the turkey as you normally would and serve stuffing and meat together.

If anyone at the table exclaims how great it is that this turkey isn’t “dry,” feel free to wield the knife once more. Give thanks for this recipe. And have a happy holiday.

Hal Rubenstein is a founding editor of InStyle and former restaurant critic for New York magazine. He is the author of six books, including 100 Unforgettable Dresses.