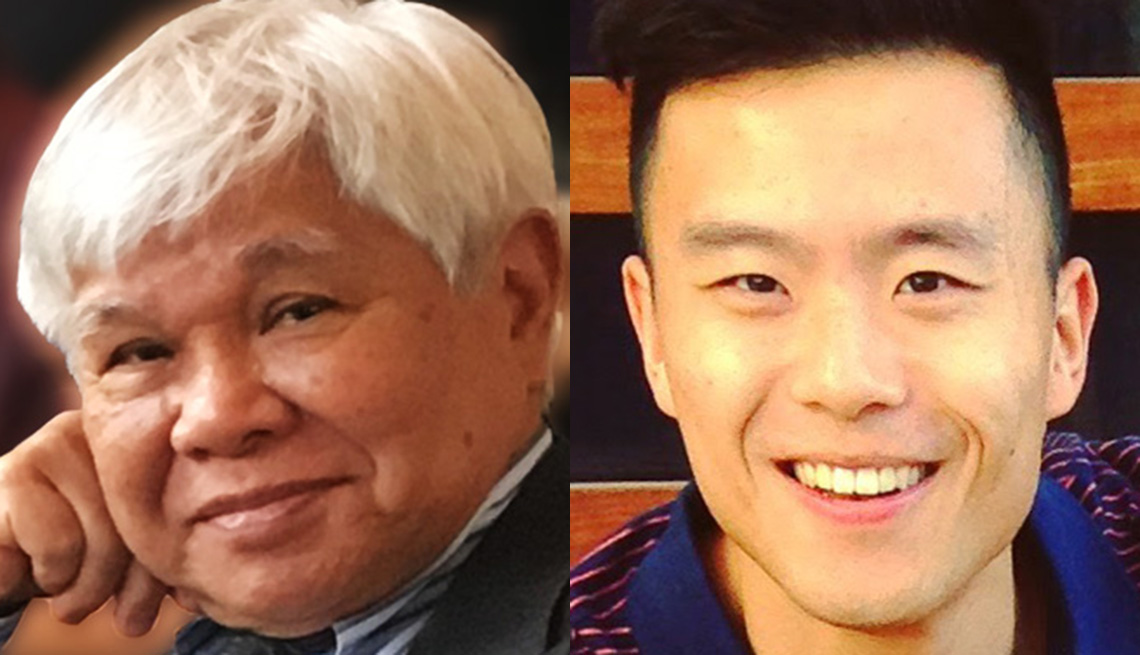 Jon Melegrito (left) is an organizer behind the Filipino Veterans Recognition and Education Project; Denny Chan is an attorney with Justice in Aging.

You voted for the winners of the third annual AARP Asian American Pacific Islander Hero Awards, and the results are in. From a field of 10 finalists’ video profiles on Facebook, you selected two awardees — Jon Melegrito in the Volunteer Category and Denny Chan in the Staff Category. Each will receive $1,000, and another $1,000 will go to their organizations to help continue their inspiring work. The winners also will be the subjects of a short documentary film to be released in November.

Seventy-five years after a quarter million Filipino and Filipino American soldiers served honorably as members of the U.S. Armed Forces in World War II, they finally have received the benefits that were promised by President Franklin D. Roosevelt but then rescinded by President Harry S. Truman.

Thanks to countless hours spent by volunteer advocates for Filipinos who served, Congress passed the Filipino Veterans Equity Compensation Act in 2009 and voted in November 2016 to award each of them the Congressional Gold Medal.

One of the advocates for these soldiers is Jon Melegrito, a tireless champion for Filipino veterans who deserves a great deal of credit for redressing the injustice.

Melegrito is a giant in the Filipino American community. His work includes fighting hunger, acting as a mentor, registering people to vote, and empowering members of his community with educational and leadership opportunities. The Filipino Veterans Recognition and Education Project, which Melegrito helped organize, was a driving force behind securing the Congressional Gold Medal for the World War II veterans.

Inspired by his father’s service and sacrifice as a World War II soldier, Melegrito wept when he learned that the Filipino Veterans Equity Compensation Act had passed. Pulling out a small photo of his father, he said, “Dad, we finally did something for you.”

Jon Melegrito asks: “How can we raise awareness about the Filipino veterans' contributions to the American story?"

Facing language and income obstacles, many Asian Americans find themselves struggling to gain access to the health care and other services they need and are entitled to by law. Denny Chan, an attorney with Justice in Aging, a legal advocacy nonprofit in Los Angeles, is determined to break down these barriers. While still in law school at University of California, Irvine, he founded the Asian Pacific American Law Students Association, tackling issues confronting Asian American communities. He has since committed his career to public service as a community lawyer, battling poverty and language-access problems, and protecting the rights of all low-income older adults.

Never far from Chan’s mind is his maternal grandmother, whose difficulties with language mirror those of so many of the individuals he is determined to help. Chan explains that she sometimes has trouble understanding even jargon-filled Chinese, her native language, let alone English, which she doesn’t speak at all.

“I think about how people like her need services but encounter unfair barriers because of their age, language, and/or income,” says Chan. He considers it his job to find ways to help them navigate health care and other service systems, especially the labyrinth of Medicare and Medi-Cal. His unflagging efforts aim to empower people like his grandmother, making certain that they are not left out of the conversation.

Denny Chan asks: “How can we ensure that AAPI older adults have access to healthcare?"

Videos for the other eight nominees are available to view: