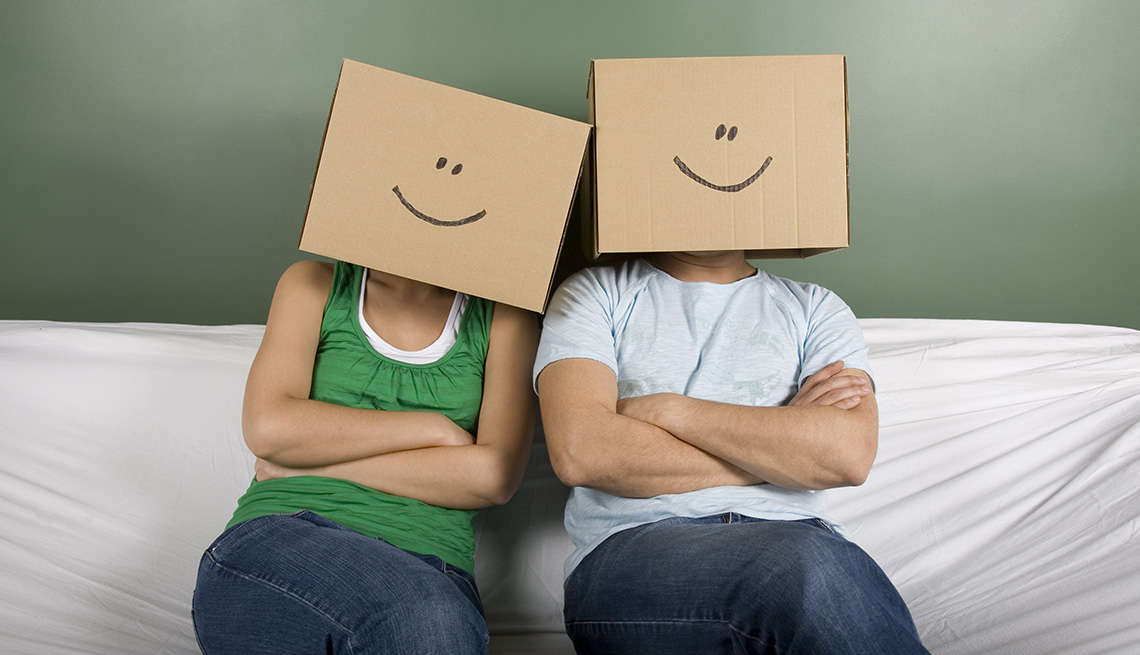 Couple sits on sofa with faces covered up with brown moving boxes with smiley faces drawn on them.

For happiness researchers, you’d think finding the connection between where people live and mental health would be a slam-dunk. Aspen, Colorado has to beat Newark, N.J., right? And you’d probably think that people who relocate, especially those making an informed decision to ditch a high-stress Washington D.C. suburb, for example, for balmy Key West, would be on Cloud Nine. But it turns out that the research on happiness and life relocation is actually a little more complicated. There are things to consider before moving  and insights that can help you make the right choice before loading up the moving van.

A team of researchers, led by Stephan Goetz, Ph.D., a professor of agricultural economics and regional economics at Penn State, studied data from a large telephone survey, including how many days in the previous month people would describe themselves as in poor mental health. Those in the unhappiest places reported an average of 8.3 lousy days per month. (Yowza—who wants to be depressed more than three months a year?) And in a surprising finding, people who had recently relocated had more bad days than people who had stayed put.

But that doesn’t mean that Dorothy was right, and there really is no place like home, Goetz says. “While this suggests that on balance, people who move are less happy, it doesn’t take into account people who have moved to improve their situation, versus—for example—people forced to move because of a company relocation.”

His data yields plenty of surprising findings for people shopping for a new hometown, a group that gets bigger as people move through midlife, beginning to rise with the empty nest years and peaking as they enter retirement. Here are three key things to keep in mind as you make your house moving decision:

Short commutes are crucial. The amount of time people spend driving or commuting to work seems to have a direct influence on the number of unhappy days they have, Goetz says. And the fun-sucking effect is universal, whether people live in cities, suburbs or the country.

Suburbs rule. Rural life may sound peaceful, and living in the city offers plenty of entertainment and cultural options. But Goetz was surprised to learn the happiest people tend to live in suburbs. He says that’s likely because inner-city life has more stressors while those in rural communities are often commuting much longer distances. “Suburbs let people be close enough to all the amenities of a city and nice aspects of the countryside, without the problems of either.”

People matter more than place. The researchers also found that people who live in communities they describe as tight-knit are happiest. (If ties are strong, they have plenty of people to lean on when stress arises.) Of course, that doesn’t mean you shouldn’t move away from your current comfort zones. But it does suggest that wherever you go, it’s vital to make sure there are plenty of avenues for finding new friends and social groups.

Finally, remember that time is on your side. Goetz says his findings meshed with other psychological research, showing that happiness typically follows a U-shaped curve, with people getting more upbeat as they move through midlife. “When people are in mid-career, worrying about their kids going to college,” he says, “they’re not that happy. But that changes as they move through their 50s and beyond.”

Try our Find Your True Home program which is designed to give you better understanding of how location plays a role in what you truly value, and make you feel more confident about whether to make the move.