En español | With great fanfare a bipartisan congressional deficit "super-committee" is working to close the huge gap between what government spends and what money it collects in taxes and fees.

By Thanksgiving the "gang of 12" Democrats and Republicans must find ways to reduce the deficit by $1.2 trillion over the next 10 years — through spending cuts, increases in revenue or both. If they fail, a series of painful cuts automatically kicks in. 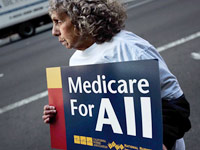 Congress faces a challenge in cutting Medicare costs to reduce the deficit.

The committee will certainly look at Medicare, but the program's future spending already has been reduced by $500 billion under the new health care law. Finding further savings won't be easy.

"The number of painless policy options is about zero," says Paul Van de Water, senior fellow at the Center on Budget and Policy Priorities.

Given that reality, the AARP Bulletin asked conservative, liberal and moderate policy analysts to list the least painful and fairest options for achieving more Medicare savings over the next 10 years. Here are some of their ideas. All face stiff opposition in Congress.

<p>Despite protests, like this one in Oakland, Calif., in July, Congress is looking at ways to wring more savings from Medicare to reduce the deficit.</p>

Liberal and many moderate groups say that to be fair, the total savings wrung from Medicare to help reduce the deficit should be 50 percent from cuts and 50 percent from new revenue. The Congressional Budget Office (CBO) says raising the Medicare payroll tax to 3.9 percent from 2.9 percent would raise $651 billion.

Added money and legal authority would take an even bigger bite out of Medicare crime, said the bipartisan National Commission on Fiscal Responsibility and Reform, appointed by the president.

Conservative and some moderate analysts favor this one, contending that asking people to pay more for Medicare services would make them more aware of medical costs. This would "discourage unnecessary" use of medical services, says James Capretta, a fellow at the Ethics and Public Policy Center.

The bipartisan commission advised streamlining Medicare's array of copays and deductibles, replacing them with one annual deductible of $550 for hospital and doctor coverage. Medicare patients then would pay 20 percent of any expenses above that deductible, up to $7,500 a year, a savings of $110 billion.

The commission advised barring private supplemental Medicare insurance (medigap) from covering the first $500 in charges and limiting coverage to half of the next $5,000 in fees, for a savings of $38 billion.

A 3-cent tax on sugar-sweetened beverages, the drinks that health experts have been urging Americans to cut back on for years, would raise $50 billion, the CBO said. Since obesity triggers a number of expensive medical problems, this tax also might help with health care costs, says Marc Goldwein, policy director of the nonpartisan Committee for a Responsible Federal Budget.

While hospitals and other providers agreed to cuts under health care reform, "there are still areas where we are overpaying," says Goldwein. The bipartisan commission proposed reducing funds to teaching hospitals, saving $60 billion. It advised Medicare to stop reimbursing providers for deductibles and copays they failed to collect from beneficiaries, saving $23 billion. The commission also advised speeding up changes in home health care payments, saving $9 billion. The CBO suggested that Medicare clamp down on payments to health care providers in areas where costs are 10 percent more than the national average, saving $48 billion.

This option is the least painful to beneficiaries, say many liberal and moderate experts. Drug firms now must provide a significant refund for drugs purchased by Medicaid. If that same discount were to be applied to all low-income Medicare Part D beneficiaries, the CBO says, $112 billion could be saved.

The law, which the CBO has already calculated will reduce the deficit by $210 billion, includes new pilot programs to cut Medicare health care costs, which the commission says should be rapidly expanded. It also created the Independent Payment Advisory Board to limit the growth of spending. The CBO did not estimate savings from either measure. "There are savings in the law that have not yet been realized … let the law prove that savings can be had without pain," says Max Richtman, president and CEO of the National Committee to Preserve Social Security and Medicare.