6 Ways to Change the Way You Think About Aging 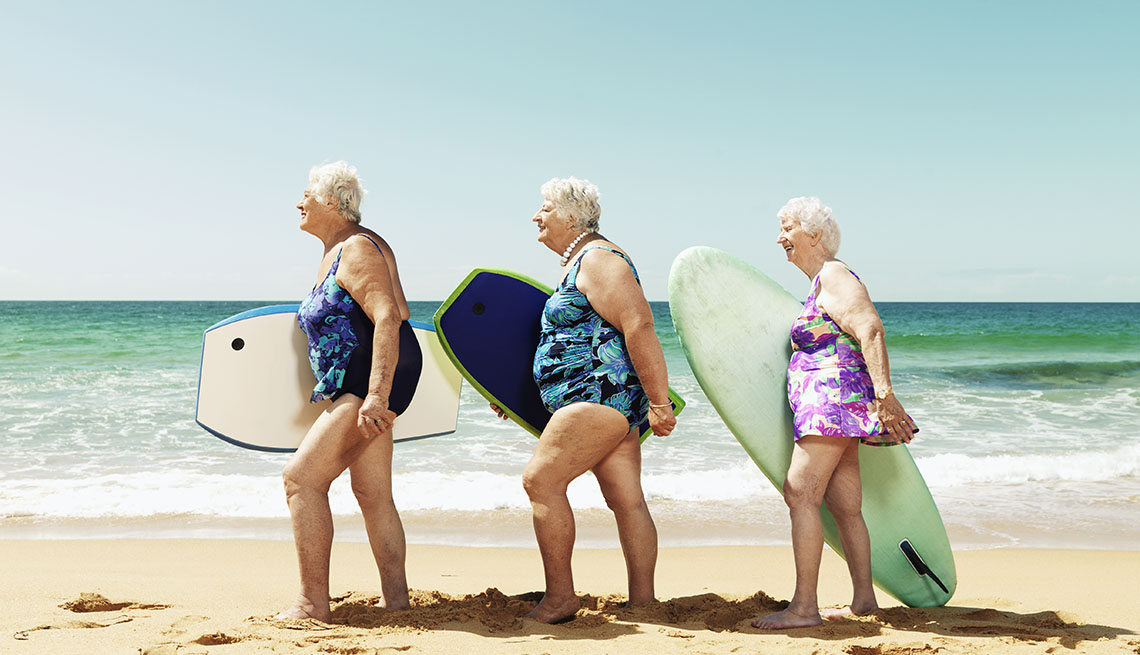 What five words first come to mind when you think about someone who’s old?

Yale researcher Becca Levy says that most Americans who answer that question include at least a few words that have a negative connotation, like senile, grumpy and weak.

The problem, Levy says, is that believing those ageist stereotypes can be a self-fulfilling prophecy.

In a new book, Breaking the Age Code: How Your Beliefs About Aging Determine How Long & Well You Live, Levy lays out a deep body of research demonstrating that many health problems formerly considered to be entirely due to aging are instead strongly influenced by negative age beliefs.

Studies reveal that people with negative beliefs about aging are more likely to experience cardiovascular events like heart attacks and strokes, chronic stress, walking and balance issues, memory problems and psychiatric illnesses such as depression and anxiety.

Ageism in our society

Many of our assumptions about age are formed when we’re children, through, say, fairy tales about wicked witches and negative portrayals of older adults in popular culture, Levy says. She compares ageism in the United States to an evil octopus with far-reaching tentacles that affects everything from employment opportunities to who gets access to quality health care. In the recent AARP “Mirror Mirror” survey ﻿of more than 6,000 women, about 30 percent of participants age 50 and older said they are regularly discriminated against because of their age.

Even the fact that we call a memory lapse a senior moment reinforces stereotypes about cognitive decline that aren’t accurate, Levy points out.

A professor of psychology and epidemiology at Yale University, Levy contrasts the American view of aging with that in Japan, which has the world’s second longest average life expectancy. ﻿There, older people are integrated into the culture and aging is celebrated, she observes.

“They have a national holiday that celebrates older people, and they treat centenarians like rock stars on television and on reality shows,” Levy says. “In the comic books that are popular there, older heroes are featured.”

Reverse your negative beliefs about aging

Fortunately, individual attitudes about aging aren’t set in stone. You can shape and correct your beliefs at any age, Levy says, and it can make a difference. In multiple studies, she has shown that people who are exposed to positive descriptions of aging improve their memory, walking speed, balance and overall health.

Ma﻿ny are already on the right track. A new “Second Half of Life Study” by AARP and National Geographic found that not only do older adults make up the happiest age group﻿, but that 2 out of 3 of those 80 and older said they are living their best possible life or close to it.

“The important piece of research is that these age beliefs are powerful, but they are malleable,” Levy says. “We can change them.” ﻿

Ready to start shifting your beliefs? Her book has a comprehensive guide on how to do that, but you can start with these steps.

For one week, record every portrayal of aging you encounter in your daily life in a notebook or on your smartphone, whether it’s a magazine image, an older character on a television show or a conversation overheard at the grocery store. For each, note whether it is a positive or negative portrayal.

If it’s negative, take a moment and consider whether an alternative message could have been presented, Levy suggests. “If you watch a television show and the only older character is a grumpy, mean principal, then take a moment and think if they could have gone with a different type of principal who displays some strength and wisdom and supports the students.”

As part of the exercise, also try to notice the absence of older people in movies, TV shows and other media. Research shows that when members of a group are absent that can lead to marginalization of that group, she says.

Age-belief journaling can be a powerful way to become more aware of the negative messages in society and start to develop the skills to challenge some of them, Levy says.

Brainstorm a list of four or five older people who﻿m you admire. They can be from your life or from TV shows, history, books or current events.

For each, write down one or two qualities you particularly admire about them that you would like to strengthen in yourself. Maybe it’s their sense of humor, their energy, their knowledge of current events or their empathy.

You could also do this activity with a group, Levy says. Invite some friends to dinner and talk about older adult role models and what you admire most about them.

Levy tells a story in her book about a pulled muscle she experienced while running a 5K. As pain flooded her knee she immediately began lamenting that her middle-aged body was already failing her and wondered if she would ever be able to run again. Her daughter later pointed out that her failure to warm up before the race was likely the true reason for her injury.

It was a wake-up call for Levy about how deeply ingrained ageist stereotypes can be. Even though she studies these stereotypes for a living, her first instinct was to point the finger at her aging body for her injury. “It’s easy to blame age itself, rather than structural sources like ageism,” she notes.

If those types of dangerous thoughts are not counteracted, Levy warns, they can affect how you feel and act, causing health problems over time.

So the next time you have a memory lapse, remember that they can happen at any age. If you have trouble hearing a friend at dinner, is it possible that the background noise was just too loud? Try to remember that many perceived health and memory problems stem at least in part from the ageist beliefs embraced by our society.

Learn the truth about negative age stereotypes, and speak out when someone says something ageist. In her book, Levy lists 14 stereotypes about aging, along with scientific evidence to contradict each one.

For example, cognition doesn’t inevitably decline in old age. In fact, evidence indicates that some types of cognition improve in later life, including a type of awareness of one’s own learning or thinking process that psychologists call metacognition — taking into account multiple perspectives, solving interpersonal conflicts and being able to recall concepts that are not related to specific experiences.

Other stereotypes include the idea that older workers aren’t as effective in the workplace and that older people are too fragile to exercise.

If you aren’t sure if a reference is ageist, try replacing age with gender. In other words, if an employer says he prefers younger workers to older ones, ask yourself what you would think if he said the same thing about men over women. If the comment would sound sexist, then you know it’s ageist.

Research shows that in many parts of the U.S., age segregation is as ingrained as racial segregation, with nearly one﻿-third of people older than 55 living in communities that are made up entirely or mostly of residents 55 or older.

Age segregation can exacerbate ageism, Levy says. “If people, especially younger people, don’t have the opportunity to interact with older people in everyday life, then it’s hard for them to come up with examples that defy some of the negative stereotypes.”

Building relationships with members of different generations can help shatter negative age beliefs. If you spend most of your time with people your own age, Levy recommends getting involved in activities that give you opportunities to interact with community members who are both older and younger than you, such as joining a community theater program or volunteering for a nonprofit.

The best way to eliminate negative age stereotypes is to end structural ageism, Levy says. In her book, she lists dozens of societal changes that could help dismantle this kind of ageism in medicine, education, the workplace, advertising, popular culture and more. Among them:

“Ideally, we would have this social movement to work together to overcome ageism and negative age beliefs,” she says. “As a society, we need to address inequities. We need to find a way to bring generations together and advocate positive messages about aging.”

Worries about finances, social support and housing top the list

Making love is about more than intimacy. It’s good for your health, too