Is Vegan Sausage Actually Good for You?

A look at nutritional values of plant-based meat alternatives. Plus, putting taste to the test 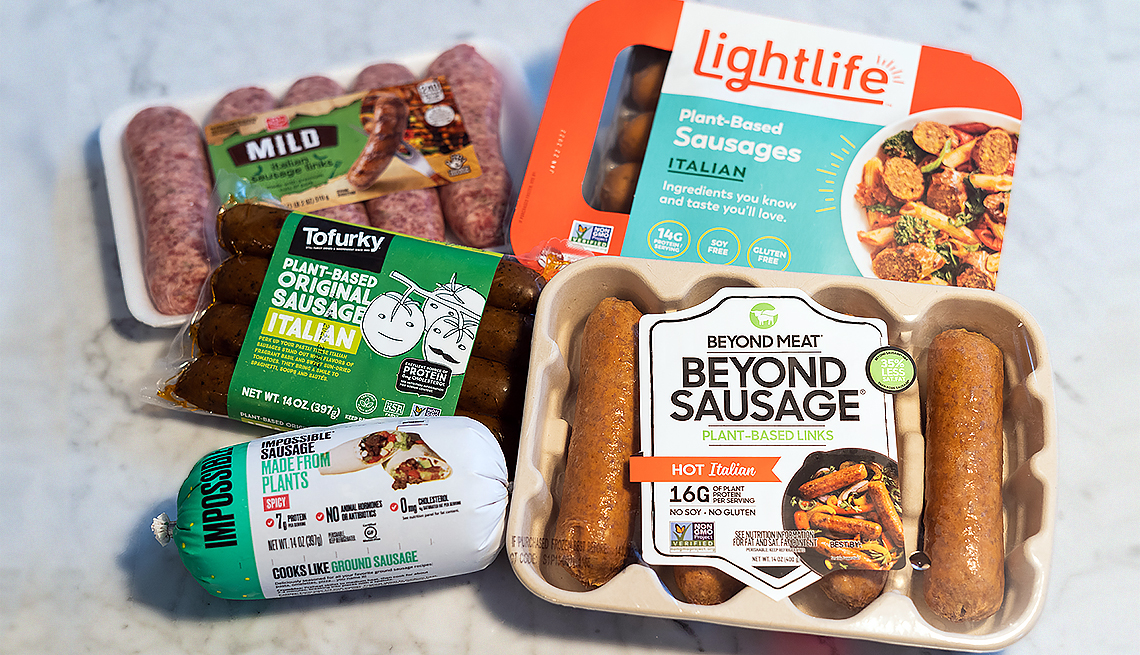 Although most Americans don't follow a vegan or vegetarian diet, the popularity of plant-based meat alternatives has taken off in recent years with the introduction of a new generation of meatless burgers from the likes of Impossible Foods and Beyond Meat. But while the faux burgers succeeded in looking and tasting more like real beef than the veggie-based offerings of the past, they did not necessarily turn out to be a healthier alternative.

But that didn't prevent people from trying them. In 2019, the plant-based food industry experienced significant year-over-year growth (11 percent) compared to other retail food sales (2 percent), according to the Plant Based Food Association.

Not surprisingly, the makers of plant-based foods are on the hunt for the next big thing in meatless meat, and everyone's favorite cookout food, sausage, is high on the list. Here's a nutritional comparison of meat and meatless sausages as well as closer look at the four plant-based sausage brands you're most likely to find at the supermarket.

The key ingredient in vegan sausage is typically either pea protein or soy protein, along with one or more oils (canola, coconut, sunflower), spices and other plant-based additions. Nutritional value varies depending on the manufacturer's precise recipe.

"The beauty of all these products is they have to have that nutrition facts panel,” says Joan Salge Blake, a clinical professor of nutrition at Boston University. “So you can see what [are] the calories? What is the saturated fat? What's the sodium?"

Blake recommends comparing various products to determine which one best meets your specific nutritional needs. Look for the “percentage of daily value” column (sometimes listed as “%DV") on the nutrition facts panel, which shows how much a serving of food contributes to a typical 2,000-calorie daily diet. If something is 20 percent or more of the recommended daily value per serving, that's high; if it's 5 percent or less, that's low. Keep in mind that serving sizes will vary by product. 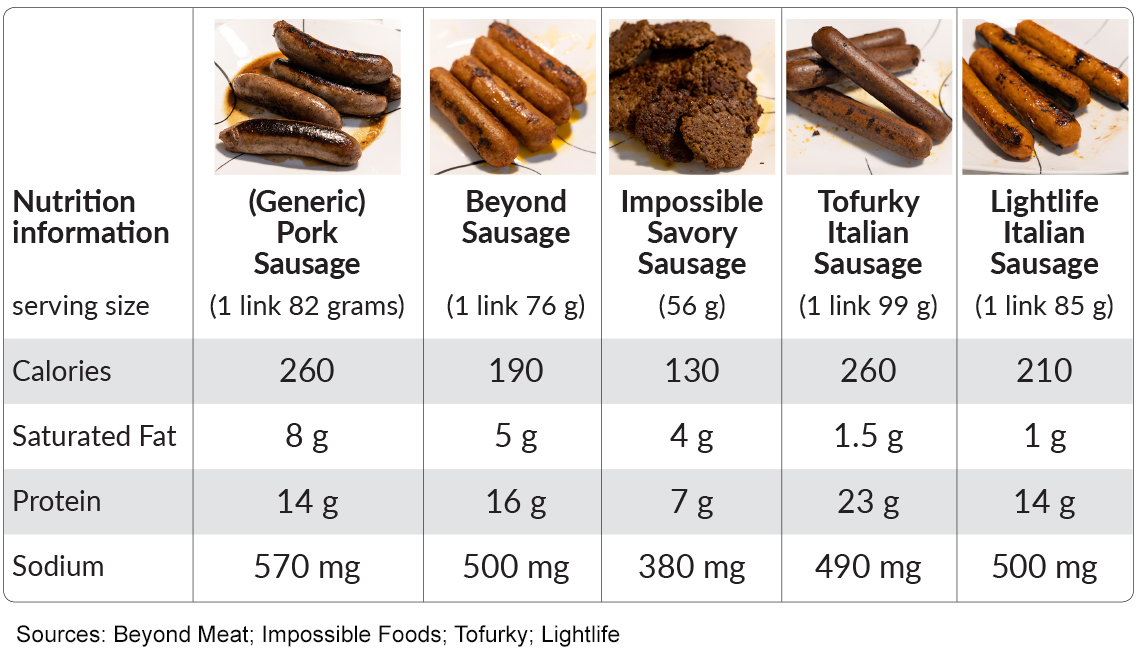 In addition to calories, the three nutrition facts that are particularly important to review are the amounts of protein, saturated fat and sodium.

Protein. We need protein to build and repair cells, and to build and maintain muscles, organs and skin. It also helps us feel full for longer. As a guideline, someone who weighs 150 pounds needs about 54 grams of protein a day, according to Harvard Medical School.

Meat is a common source of protein. Vegetarians, vegans and others who avoid meat or eat it sparingly need to get their protein from other sources, which can include plant-based meat alternatives. Just a single serving of Tofurky Italian Sausage, for example, provides 47 percent of the recommended daily value of protein.

Saturated fat. Not all fats are bad, but saturated fats contain artery-clogging properties.

Health Benefits of a Plant-Based Diet

A diet with a foundation of plant-based foods can also include fish, poultry, eggs, cheese and yogurt. Large population studies and clinical trials have found that a plant-based diet reduces the risk of:

"The problem with Impossible [sausages] is they use coconut oil, and coconut oil is a saturated fat, and that increases the total cholesterol and LDL levels,” says Robyn Goldberg, a registered dietitian nutritionist based in Los Angeles and author of The Eating Disorder Trap. “As opposed to Tofurky, which does not use any coconut or palm or tropical oils in their products, which, to me being a former cardiac dietitian, that makes it more desirable."

A single serving of Impossible Sausage Savory, made to mimic a ground pork sausage, has 20 percent of the daily recommended value of saturated fat. By comparison, the Tofurky sausage, which contains canola and sunflower oils, has just 8 percent of the saturated fat value per serving.

Sodium. While some sodium is needed in every diet to support vital bodily functions, too much can lead to high blood pressure, heart disease, stroke or other health issues.

Like real pork sausage, all of the plant-based sausages are relatively high in sodium. A serving of Beyond Sausage, for example, has 22 percent of the recommended daily sodium value, as does a single serving of Lightlife Italian Sausage.

However, you can still come out ahead on the sodium front by preparing these sausages as part of a meal at home rather than eating out (and depending on what you serve them with). Vegan sausages average around 500 milligrams of sodium apiece, but when you go out, you'll consume between 1,000 and 2,000 milligrams of sodium, on average, Goldberg says.

The bottom line. “A person can't go wrong with any plant-based veggie sausage, because they will be consuming less fat, let alone saturated fat, than having regular [pork] sausages,” says Goldberg. A typical pork sausage has about double the saturated fat per serving of both the Impossible and Beyond sausages, the two vegan sausages with the highest levels of saturated fat.

If a switch to plant-based sausages seems too daunting, Blake recommends replacing pork sausages with turkey or chicken sausage made from skinless meat. These poultry sausages can contain around 1.5 grams of saturated fat per serving compared to perhaps 8 grams in a serving of pork sausage.

"What a plant-based diet means, really, is a diet that is chock-full of fruits, vegetables and whole grains. And then, more leaner sources of animal products, such as chicken, fish and dairy products,” says Blake. “People think everything has to come from the plants, but that's not necessarily the truth." 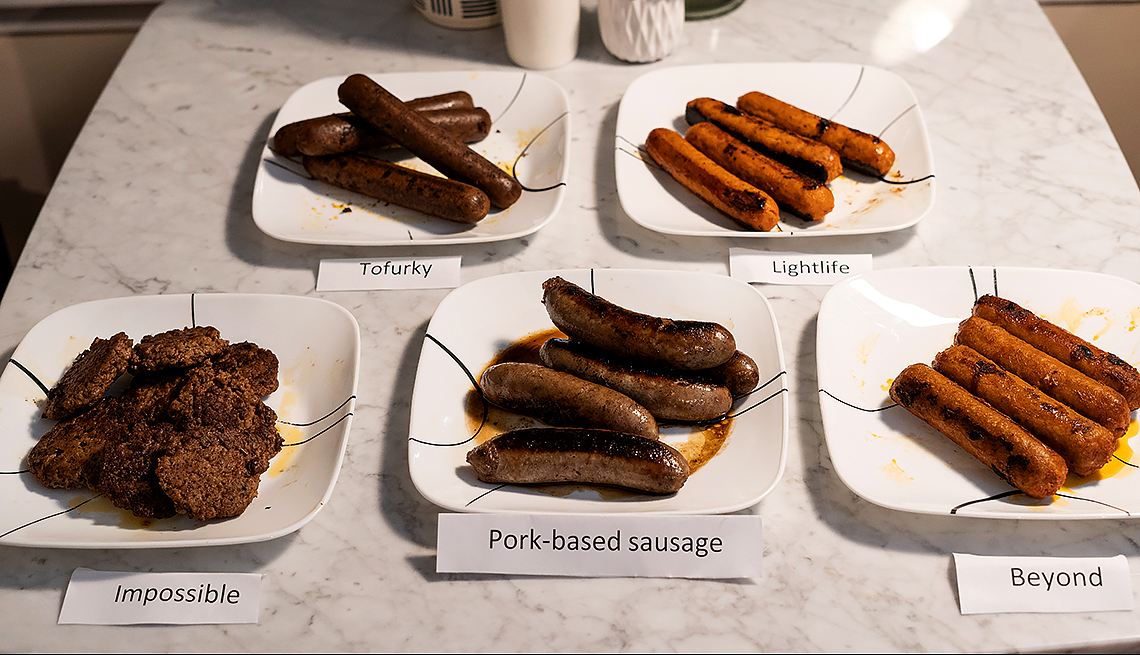 Can fake sausage taste as good as the real thing?

Ultimately, when it comes to food choices, taste can be as important as nutrition. We enlisted 10 people to participate in an informal taste test to find out which of these vegan sausages best pleases the palate: Beyond Sausage Hot Italian, Impossible Sausage Savory, Tofurky Italian Sausage or Lightlife Italian Sausage. We added an Italian pork sausage to the mix as a point of comparison.

The results? Half of the taste testers said they liked the flavor of Impossible's sausage the most, while nine said Tofurky's tasted the worst. The one person who liked the Tofurky sausage pointed to its enjoyable “sage flavor."

Six of the 10 said the Impossible sausage had the best texture, while nine agreed it tasted the most like meat. Visually, Lightlife pleased the most testers (60 percent). When asked which sausage they would eat again on their own, six voted for Impossible, two voted for all of them, and two voted for both real pork and Beyond.

"I'm a self-described carnivore, but these plant-based sausages were a lovely surprise,” said one of the testers.

One caveat: Impossible's sausage is not encased like the other sausages. Rather, it's packaged loose like ground sausage instead of as links. That was a concern for at least one tester.

"If Impossible encased this recipe, I'd definitely buy it,” said the taster. “It's just a bit too messy for everyday use [without a casing]."