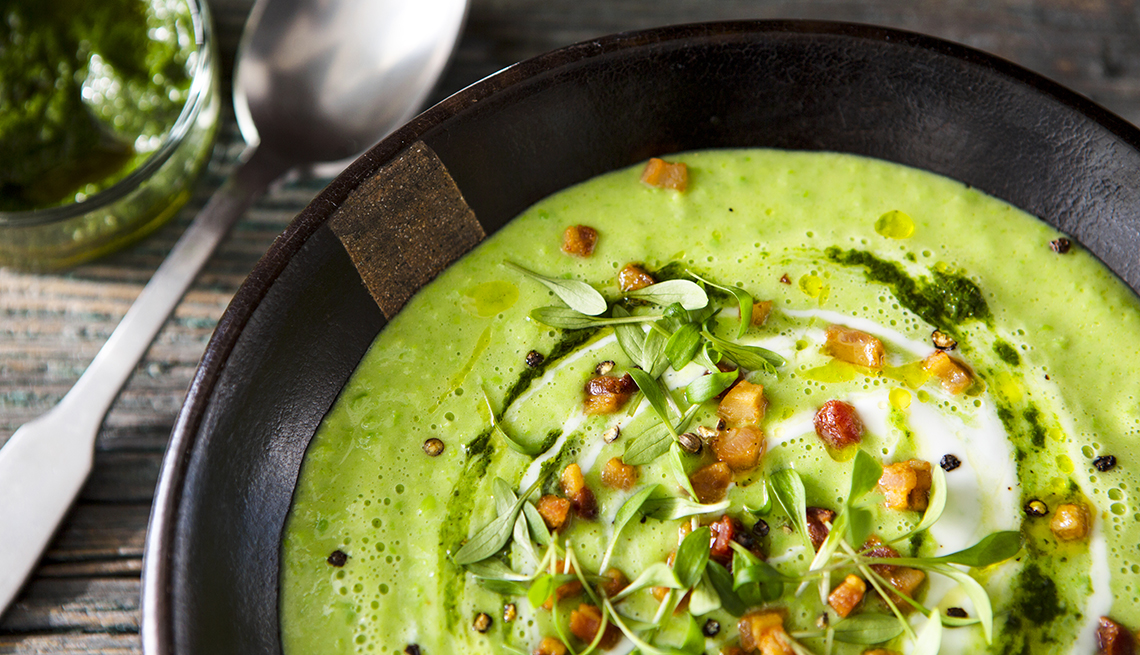 En español | Who has fond memories of the Cabbage Soup Diet? The stewing, the brewing, the hunger … the stench!

If you were hoping this weight-loss fad would stay gone, just like those excess pounds you once shed on it, you're out of luck. The soup diet is back, albeit with a new name.

The good news is there's something in it for all of us, and it's not cabbage. Experts say “souping,” as the trend has been called, can help you lose weight. And it can do so without making you feel like you're starving.

"The water in soups adds volume, which fills you up,” says Shannon Weston, nutritionist supervisor for the Nourish Program at the University of Texas School of Public Health in Houston. “That combination of food and water slows gastric emptying, which increases satiety and leaves you feeling full.”

There are many ways to “soup.” You could eat soup and nothing but soup, which is sometimes called a soup fast, or cleanse; you could eat soup as an appetizer; or you could have soup for just one meal, or two. You could make a variety of soups yourself or you could have them all delivered to your doorstep via a variety of new online delivery services. “It's very open to interpretation,” says Dawn Jackson Blatner, a Chicago-based registered dietitian and nutritionist, and author of The Flexitarian Diet. “Think of souping as a cousin to juicing. You're using a different liquid at a different temperature, but the idea remains the same."

When Souping is Super-Healthy

Yet proponents of souping, such as Elina Fuhrman, founder and chef of the soup cleanse delivery service Soupelina in Los Angeles, say there are distinct differences. “With juicing, you're getting just the liquid part of the vegetable,” she says. “With soups, you're getting all the fiber."

When veggies are pureed into a soup, you're also able to eat more of them than if they were whole on your plate. Blatner and Ronette Lategan-Potgieter, a registered dietitian and visiting professor of health sciences at Stetson University in DeLand, Florida, agree. “Many Americans consume way too little vegetables and plant-based proteins in their diets,” says Lategan-Potgieter. “Eating soup can be an easy and tasty way to incorporate more vegetables and legumes in the diet, which have well-reported health benefits."

It's because of this veggie boost that Blatner says she wouldn't warn the average healthy person against doing something like a soup fast. She does, however, note that those facing health challenges like heart disease, diabetes or a kidney condition should steer clear. (For one thing, restricting calories this way can cause shifts in blood sugar and electrolytes that are difficult for people with these conditions to manage.)

How to Lose One Pound a Week

But for most, Blatner says that souping could be a way to kick-start healthy eating, as long as you're getting at least 1,200 calories a day for women or 1,500 for men.

"Psychologically it gives you a clean-slate vibe,” she says. “You realize you were able to get full eating soup, so maybe you don't need that ice cream after all."

What, exactly, does a soup fast look like? On a typical fast through Soupelina, you'd eat five different soups a day, one every two-and-a-half to three hours. You'd also start your day with a hot water and lemon, and drink a turmeric-based broth in the afternoon. You're allowed to munch on a few carrots, Persian cucumbers, radishes or celery if you need something to chew. Doing the entire fast, the company says, could lead to losing as much as one pound a day.

Blatner says there are limits to how long someone should go on a soup cleanse. The average healthy person, she notes, should spend no more than five days on a soup cleanse, and she recommends checking with your doctor before embarking on such a program. Adding soup as an appetizer to one or two meals a day, on the other hand, is something that could be done long-term.

And research shows that working soup into your diet in smaller ways really can help you lose weight. In fact, two bowls would likely do the trick, according to researchers at Pennsylvania State University. They found that people who ate two servings of soup a day as a snack lost 50 percent more weight than people who snacked on the same amount of calories in pretzels and chips. Soup eaters lost as much as 15 pounds over a year while the most weight a pretzel eater lost was 11.

This phenomenon could be explained by another study conducted by some of the same researchers. It found that people who ate soup before a meal ended up consuming 20 percent fewer calories during that lunch or dinner than people who weren't served soup first. In the study, women were served one-and-a-half cups of soup before meals and men were served two cups.

You might be wondering: Could just drinking the same amount of water have the same effect?

Ready for a bowl of soup? Try this recipe from Soupelina.

I Yam Who I Yam