Join AARP at 1 p.m. ET Thursday for a special live Q&A event on caring for loved ones in care facilities. Learn more. 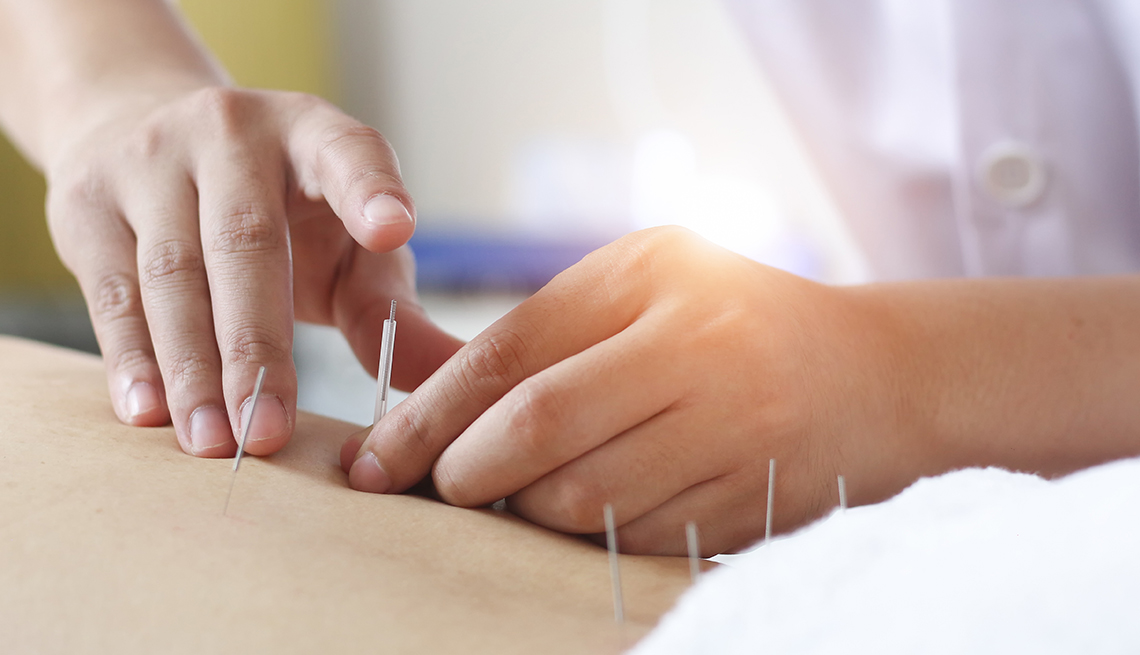 En español | You may have heard the news that Medicare will soon offer coverage for acupuncture treatments for lower back pain — up to a maximum of 20 such sessions in a year, potentially, for those whose pain isn't related to another health problem or recent surgery.

This alternative medicine approach is part of Medicare's effort to combat overreliance on opioids and to prevent the use of more invasive procedures. But if you're wondering whether you should get on the table yourself, read on for what's involved and how experts say a session may, in fact, help your aching back.

The Eastern (and Western) view of the practice

The practice of acupuncture — used on all kinds of ailments — dates back thousands of years in traditional Chinese medicine and is based on the belief that energy in the body flows along pathways, called meridians. Blockages to this flow, the thinking goes, cause illness, while inserting hair-thin needles into the body at specific points ("acupoints") along these pathways can unblock and restore the body's balance and energy flow.

Western medicine explains acupuncture as a possible stimulant to the nervous system, signaling the body to release things such as endorphins, immune system cells, opioids, neurotransmitters and neurohormones, which help to restore physical and emotional wellness. There is also evidence that acupuncture may influence involuntary central nervous functions, such as blood pressure, blood flow and the body's temperature regulation, notes Joseph Audette, M.D., an assistant professor at Harvard Medical School. His own research indicates “acupuncture may have some influence on reducing normal brain response to chronic pain.” When the body experiences chronic pain, he explains, the central nervous system becomes sensitized, sometimes reacting to stimuli that are no longer actually there. “Acupuncture can reverse that.”

Other studies suggest a placebo effect from acupuncture, indicating that our own mind — convinced the procedure is working — dials down the pain signals on its own.

When to consider a session

"Typically, if a patient isn't getting better — if back pain has persisted for three months or so — then acupuncture or other nonpharmacological therapies should be considered,” says Karen Sherman, senior investigator at Kaiser Permanente Washington Health Research Institute in Seattle.

The American College of Physicians recommended a similar approach back in 2017, when it advised doctors to treat patients with low-back pain with nondrug therapies that included “superficial heat, massage, acupuncture, or spinal manipulation."

Using the treatment for low back pain in particular

Both Sherman and fellow senior scientific investigator Daniel Cherkin note that from their study of 638 adults with chronic low-back pain, one of the biggest done in the U.S., patients who received acupuncture improved significantly more than the adults who did not. Specifically, about 60 percent of patients who received acupuncture improved, compared with 39 percent of patients who received the standard care, without acupuncture. Research from the National Institutes of Health has also shown positive results with using acupuncture to reduce lower-back pain in particular. “Of course, it's not for everybody,” Sherman says. “Nothing has a benefit for everybody. But it does have a clinically important benefit for patients compared to usual care.”

As for who should not go under the needle(s)? Experts advise against acupuncture for anyone with a bleeding disorder (since needles are involved, though they aren't actually placed deep enough to break the skin) or anyone with a pacemaker (since in some types of acupuncture, mild electrical pulses are sometimes applied to the needles).

What to expect during a session

After an acupuncturist evaluates your chronic back pain and records some brief health history and lifestyle habits, she will determine the best number and location of needles to be used in your procedure. You will be asked to lie prone in a comfortable position while the needles, which are about the diameter of a human hair, are inserted.

Most patients say they don't feel the insertions at all, and many find the entire roughly 30-minute procedure relaxing. The number of treatments you require will depend upon your rate of improvement. Patty Wang, a Denver acupuncturist who trained in China and has been practicing for over 40 years, says that over 90 percent of her back pain patients — both acute and chronic — improve after two or three treatments.

How to locate an acupuncturist

A provider can be a doctor, physician assistant or nurse practitioner who holds a master's or doctoral-level degree in acupuncture or Oriental medicine from an accredited school, and who also holds a state license to practice. Or the acupuncturist can be trained entirely in acupuncture.

More on Back Health