How the Impossible Burger Stacks Up to the Competition 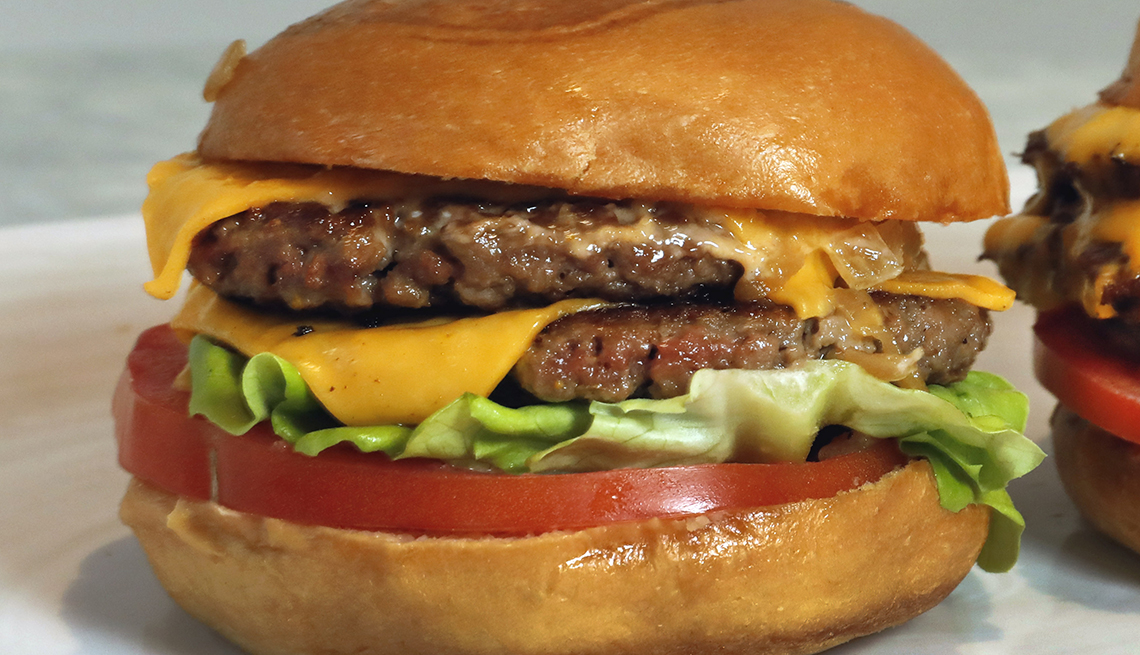 As we age, it is important to seek foods that are nutritious yet still please the palate.

The hamburger is an American classic that has continuously been reinvented on menus across the country yet, in the spirit of health and environmentalism, consumers have pivoted toward limiting meat consumption, spawning a plethora of patties that don't contain beef at all.

The Impossible Foods and Beyond Meat brands are the latest companies to provide plant-based burger options they claim taste more like beef than any of their predecessors or competitors. But how do their taste and nutrition compare with ghosts of veggie burgers past, such as Boca or black bean? And do they actually taste like real burgers?

"This is a very interesting phenomenon because we're dealing with something [the plant-based Impossible Burger] that has gotten a lot of media coverage and people have embraced in the restaurant industry. Yet at the same time we're talking about eating foods that are closer to farms,” says Joan Salge Blake, a clinical associate professor of nutrition at Boston University. “You can't get something that's more processed than these kinds of new burgers, which kind of makes me scratch my head." 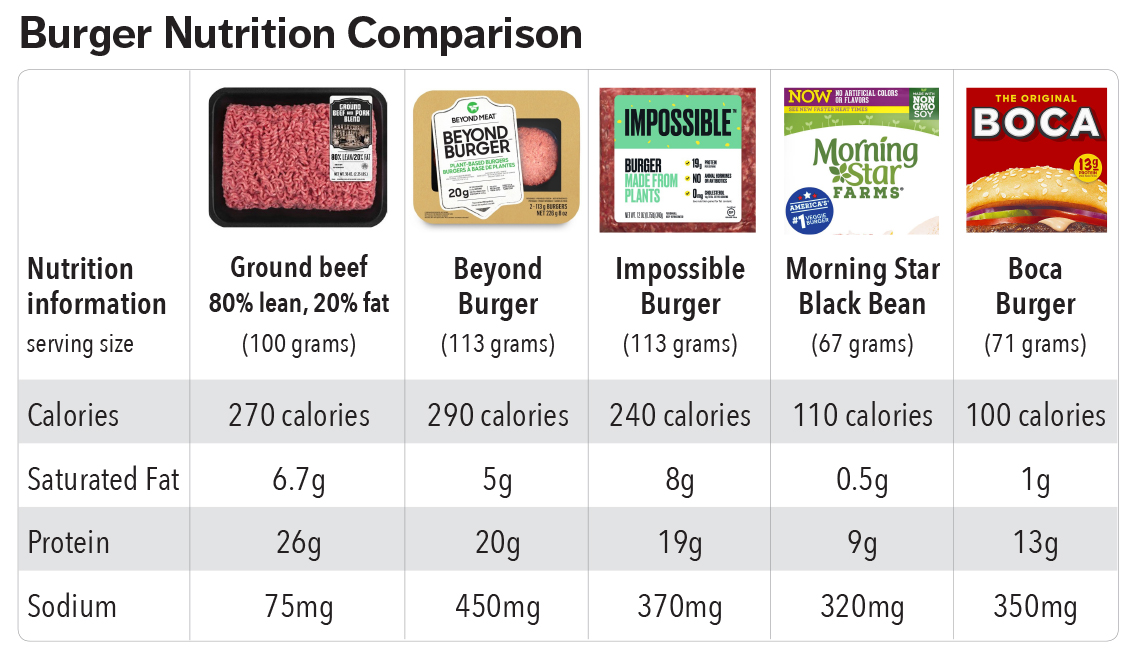 The patties are genetically engineered from soy protein isolated from plants and combined with other nutrients to get their meaty flavor.

Blake says that while there's about the same amount of fat in a beef burger as in an Impossible Burger, a beef burger packs more protein. A regular hamburger also has less of the saturated fat that is thought to be unhealthy for the heart. Still, Blake says, if you prefer to stick with meat, it's important to buy lean cuts.

Lean cuts of meat “are very fabulous sources of zinc and iron, and good sources of protein — and people like the flavor,” Blake says.

MyPlate, the nutrition guide published by the U.S. Department of Agriculture, recommends that one-quarter of the plate be a protein source, another quarter should be grains, preferably whole grains, and half of the plate should be fruits and vegetables.

Other types of veggie burgers?

"A black-bean burger ... has to be processed,” Blake says, because the beans need to be mixed together. “The black-bean burger could be healthy, but maybe it won't be if it's made with coconut oil and cheese and a lot of sodium.” Nutritionally, “it may come to be similar to a regular burger,” she says.

Boca Burgers are “made of highly processed ingredients, not whole plants. They do have less fat and saturated fat, and a little less sodium, compared to regular burgers,” says Alissa Rumsey, a dietitian who runs a nutrition and wellness center in New York City.

Blake tells consumers to look at nutritional facts so they can make an informed decision. At the grocery store, she says, compare prices and focus on getting the most nutritional value for the money spent.

"Some people buy what's on sale to make their dollar stretch farther. That could be a concern for a lot of people, especially for people who are retired or on a fixed budget. You need to be doing a lot of comparisons here based upon your wallet and your health, and that's very personalized,” she says. 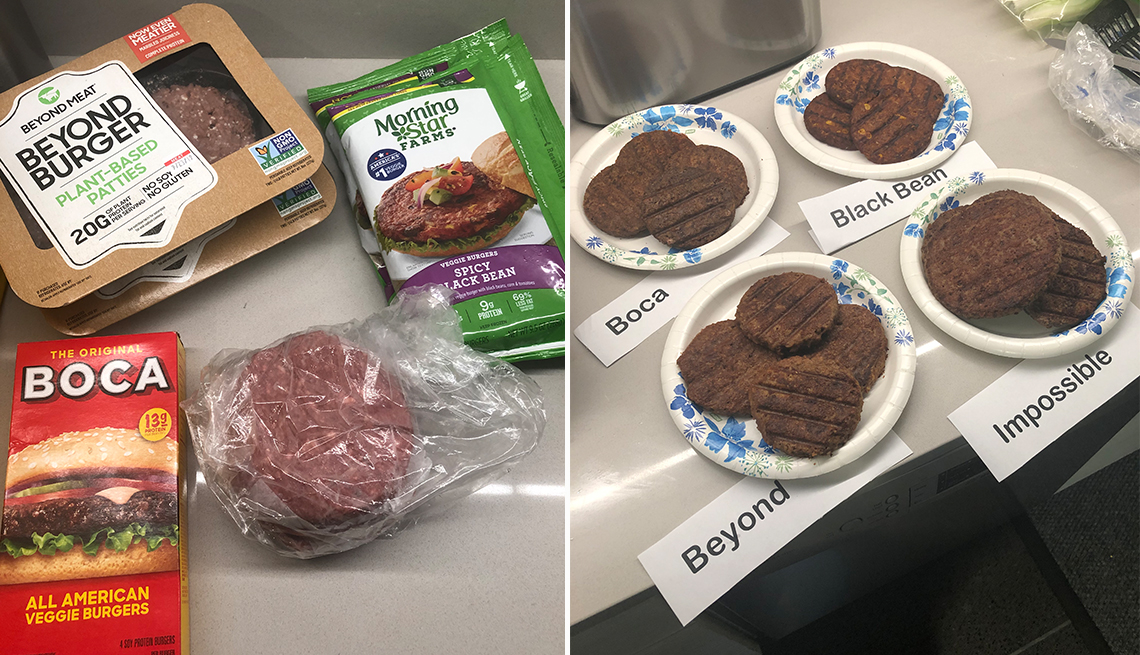 The four types of nonmeat burgers we cooked up for our taste test.
Aaron Kassraie

Other consumers may seek out plant-based burgers in an effort to protect the environment.

A plant-based burger generates 90 percent fewer greenhouse gas emissions, requires 46 percent less energy, and has less than 99 percent impact on water scarcity and 93 percent less impact on land use than a quarter pound of U.S. beef, according to a study by the Center for Sustainable Systems at the University of Michigan that was commissioned by Beyond Meat.

In the end, it's all about whether a burger appeals to the palate. So we taste tested four different types of popular nonmeat burgers: Impossible, Beyond, Boca and MorningStar's black-bean burger.

Of our 10 testers, seven preferred the Impossible Burger. “If I hadn't been told it's not meat, I never would have known,” said writer-editor Kenneth Terrell. Two testers most enjoyed the black-bean burger: “It had the best taste. I like Southwestern flavors,” said web designer Christine Charboneau. SEO specialist Alyson Klush thought the Impossible Burger's texture was more like beef, but she said the Beyond Burger had “more flavor.” The Boca Burger was the testers’ least favorite.

Six of the 10 said they would choose to have a plant-based burger over a regular hamburger. Three said they'd go for a traditional beef hamburger. One tester was on the fence. “There's no need to replace your beef burger if you don't enjoy [substitutes],” New York dietitian Rumsey says. “You'd be OK to keep eating beef burgers and then include more whole-food forms of plant-based protein like [beans, lentils, peas, chickpeas], nuts and seeds, and certain grains like quinoa.”

Can Drinking Soda Really Kill You?