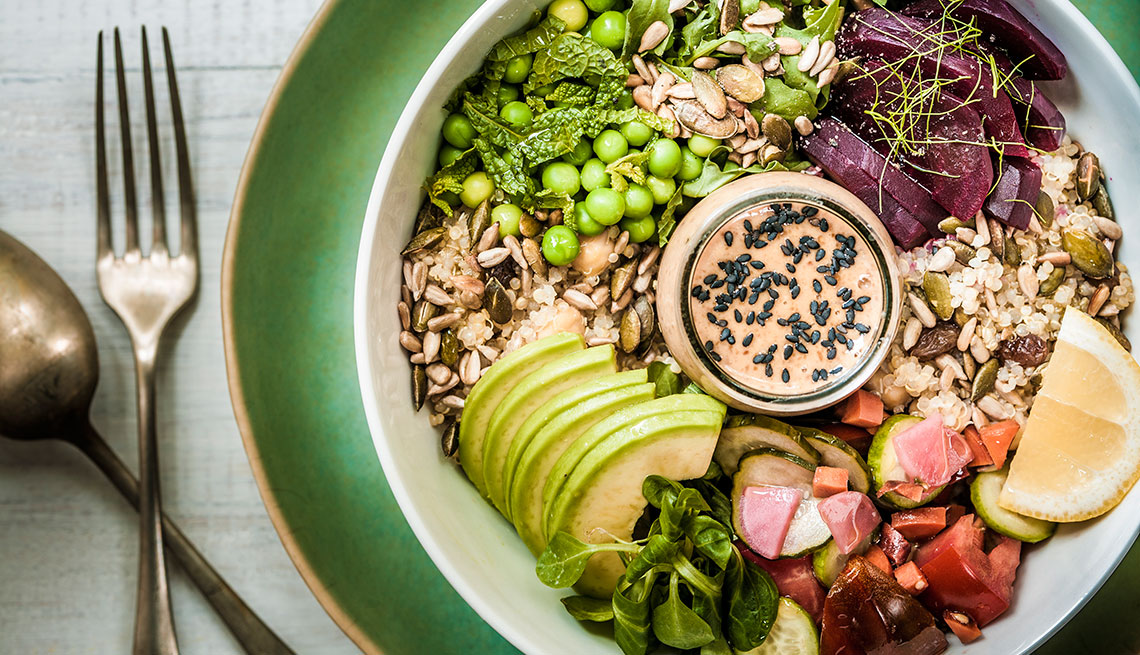 Participants in a Stanford University study said that focusing on whole foods and sitting down while eating had changed their "entire relationship" with food for the better.

Want to lose weight but don’t want to count calories, exercise more or even think about portion size? There's a plan for that (we can't really call it a diet), and it was just published in JAMA as the unexpected takeaway of a large study originally designed to find a genetic "signature" for weight-loss success.

To test for that — part of a larger push toward scientifically backing up ideas about personalized dieting strategies — researchers at the Stanford Prevention Research Center divided 609 overweight or obese adults into two groups. One group was asked to eat their choice of lower-carb foods and the other group, lower-fat foods. Beyond that, everyone was instructed to maximize their veggie intake and lower their consumption of added sugars, refined flours and trans fats. With some guidance and suggestions from dietitians, participants were also told to focus on whole foods that were minimally processed, nutrient dense and prepared at home whenever possible.

"We explained that buying a box of low-fat brownies,' with 'low-fat' emblazoned on the package, wasn’t going to cut it," said Christopher D. Gardner, the study's lead author and a professor of medicine at Stanford University. "That was gaming the system. That wasn’t quality. It was crap. Likewise, we didn’t want them buying low-carb chips, with 'low-carb' emblazoned on the package." His vision of "quality" eating also extended to lifestyle choices: "We asked them to not eat in the car, not eat in front of a screen, eat with friends and family, and try to cook for them and with them more often. In short, we asked them to work on being more mindful, less mindless."

Otherwise, what the study subjects ate was their choice; no one was ever asked to use a smaller plate or count calories — something a few of the participants expressed "great relief" about, Gardner said.

The "quality over quantity" approach showed results on the scale, too. Some participants lost as much as 60 pounds — again, simply by saying goodbye to things such as white bread and soda, and hello to options such as lentils and sweet potatoes. And some who went overboard on portions even gained weight, up to 20 pounds. But overall, those who were asked to eat fewer carbs lost, on average, more than 13 pounds. And those who were asked to eat lower-fat foods lost more than 11.7 pounds.

The study underscores the value of basic, "foundational" healthy eating, which Gardner said should be a major part of any diet you might try, from Mediterranean to paleo. He also said that for now, you should be wary of any prescriptive diet created just for your genotype. (The science, he said, isn't there yet — and not only because his current research failed to show how your individual level of insulin resistance influences your experience on a particular diet.)

Considering that participants lost weight almost entirely by following nutritional guidelines that most people disregard — a recent study from the Centers for Disease Control and Prevention found that only 1 in 10 of adults eat the recommended amount of fruits and vegetables — it’s probably not surprising that both groups also saw improvements in waist size, blood sugar, body fat and blood pressure. Participants also commented that choices such as focusing on whole foods and sitting down while eating had changed their "entire relationship" with food for the better.

If you do want to lose weight, Gardner said that his research could offer a starting point. "For now, start with those foundational components, and they will likely take you a long way toward long-term solutions. And then go ahead and play around at the edges with some options appropriate for your preferences, your culture, your social settings." As he puts it: "Personalize your own diet."