We’ve always known walking is good for us—it burns calories, reduces stress and strengthens muscles. But we never knew how great until the 2015 Call to Action on Walkingfrom U.S. Surgeon General Vivek H. Murthy. The landmark report is based on definitive medical evidence that moderate physical exercise boosts your health and cuts your chances of diabetes, dementia, depression, colon cancer, cardiovascular disease, anxiety and high blood pressure by 40 percent or more.

A major study released this year shows that lack of exercise is twice as deadly as obesity, according to Cambridge University researchers who studied more than 300,000 people over a 12-year period. Seventy-nine percent of Americans believe they should walk more, yet 52 percent of us don’t get the recommended weekly minimum of walking or other physical activity:

The Centers for Disease Control (CDC) recommends that Americans walk at least 30 minutes a day, five days a week—or bike, run, swim, dance, garden, do aerobics and play sports. But taking a walk is the exercise that people stick with most over time, according to the American Heart Association.

In addition to improving your health, other benefits include:

Taking a walk is one of the best ways to meet new neighbors and deepen ties with those you already know. Fostering these kinds of social connections is an additional boost to our physical and mental well-being. “Seeing friends on the street, walking to work, strolling out for dinner or nightlife,” are among the pleasures of walking that enrich our lives, says Christopher Leinberger, an author on walkable communities, real estate developer, and George Washington University business professor.

Eighty-five percent of Americans believe that walking helps reduce anxiety and feelings of depression, and two-thirds of Americans report that walking “stimulates their thinking” according to a national survey. American philosopher Henry David Thoreau agrees: “The moment my legs begin to move, my thoughts begin to flow,” he wrote in his journal.

Improving your commitment to exercise

Studies show we stick with exercise more when it’s a regular part of our day, rather than a leisure time activity.

“The moment my legs begin to move, my thoughts begin to flow.”

Ready to start walking? Here are some simple tips to make it easier.

Figure out the best times to walk for your schedule. Maybe it’s first thing in the morning. With your kids on the way to school. Taking the dog out. Before bedtime. With friends.

2. Seize the opportunity whenever you can

Take the stairs instead of an elevator. Park a few blocks from your destination. Ride transit (which involves a walk on both ends of the trip). Swap the drive to the gym for a hike around the neighborhood. Run errands on foot. It all adds up.

The CDC’s recommended minimum—30 minutes a day—is a good beginning. Do it in two or three separate trips if you need to, then build up to longer distances.

A pedometer, phone app or other device that monitors how far you walk every day can be a handy tool. Fitness experts recommend 10,000 steps a day, but that will vary depending on personal factors. Americans on average walk about 5,110 steps a day—about half as many as Australians, who live in a similarly car-oriented society.

5. Make sure your route is enjoyable

Wear comfortable walking gear. Find a route that is interesting, perhaps with a favorite destination like a coffee shop, park or a great view. “If you’re slogging through something you don’t enjoy, you won’t stick with it,” says David W. Brock, assistant professor of exercise and movement science at the University of Vermont. 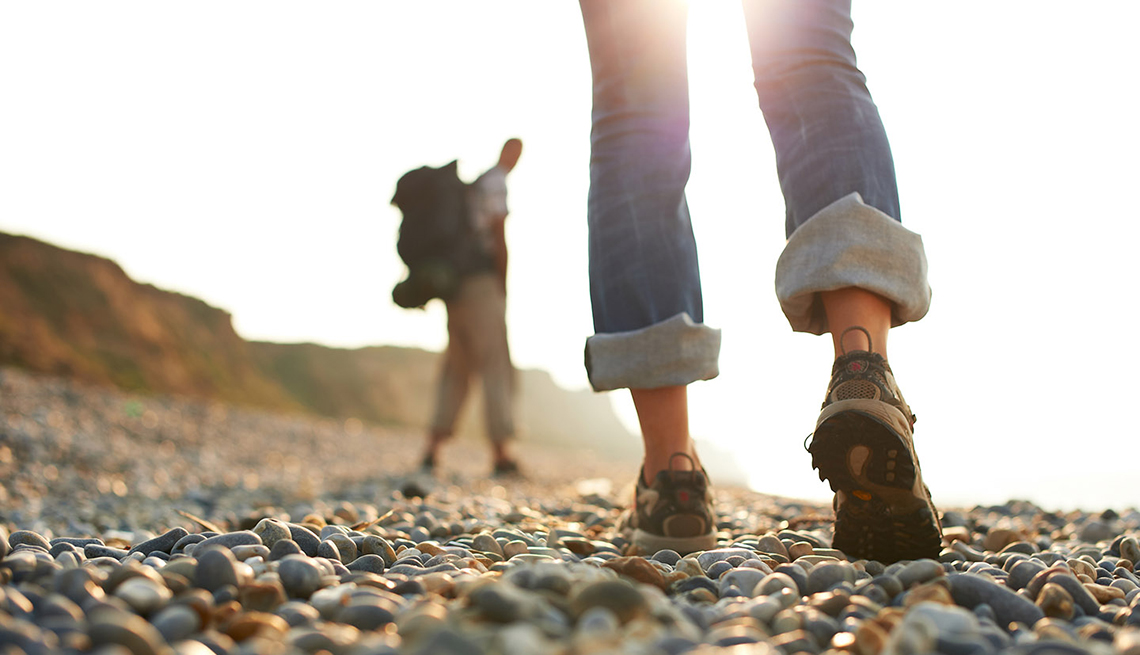 The latest research confirms that food has healing powers for your body. Are you giving your body the nutritional medicine it needs?

6. Weave walking into your social life

Suggest a walking “date” with your partner, friends or family. Instead of meeting someone for lunch, a drink, or a movie, begin with a walk before you sit down together. Or invite dinner guests to stroll around the block after a meal. In New York City, it’s a long-standing tradition for folks to walk through Central Park or along the Brooklyn Promenade. In San Antonio, people regularly stroll the Riverwalk. A walk after dinner is an enduring custom in many countries. Italians call it a passeggiata, in Latin America it’s the paseo, in Germany the spaziergang. In the English-speaking world, it’s the promenade. People generally follow the same route through town, making it a social occasion as much as an exercise regimen.

7. Be prepared for weather

When rain, snow, cold or heat hit, make sure you have the right clothes to keep going. New fabrics and gear can keep you comfortable in even the most challenging weather. Or discover an indoor walking route at a recreation center or mall. Actually, weather has less effect on walking than you’d think. In rainy, chilly Seattle, 9.1 percent of commuters travel on foot, according to census data, compared with 2.9 percent in San Diego, which has 100 fewer days of rain each year. In snowy Syracuse, NY, 10.4 percent walk to work compared with 1.4 percent in mild Jacksonville, Florida. In frigid Minneapolis, it’s 6.4 percent compared with 1.8 percent in Dallas, where the January high averages 57 degrees. Indeed, Minnesota ranks second in the nation for walking during the summer, and a surprising fifth in the winter.

Instead of gathering around a table, walk around the block—you’ll likely see a spike in people’s creativity and attention. Facebook founder Mark Zuckerberg and Twitter co-founder Jack Dorsey both favor walking meetings, as did Steve Jobs, Sigmund Freud, Charles Dickens and Aristotle. Prominent corporate consultant Nilofer Merchant explains how it works in a TED Talk. Since 80 percent of Americans get virtually no physical activity in their jobs, this could be a giant boost for the nation’s health. Also, try walking around your home or workplace while talking on the phone.

“If you want to go fast, walk alone; if you want to go far, walk together,” says an African proverb. Round up co-workers for a lunchtime hike. Grab the neighbors for an evening stroll. You’ll walk more often and more merrily when you share the journey. Think of it as a book club with no homework. Thirty walking groups were launched in Albert Lea, Minnesota, in 2009 as part of a community-wide campaign to improve health. More than half are still going, with four to ten people meeting to walk three to seven times a week. Girl Trek, a growing organization dedicated to help African American women stay in shape, has launched walking groups from Oakland to Jackson, Mississippi, to Philadelphia, involving more than 10,000 women.

Jane Jacobs, an author and activist who stood up to stop a highway planned for her New York neighborhood in the 1960s, is the godmother of the movement to make our communities more livable. She died in 2006, but her legacy lives on in Jane’s Walks, where folks in neighborhoods from Regina, Saskatchewan, to Carthage, Mississippi, organize walking tours to discover the attractions and history of their community.

11. Aspire to walk marathons or half-marathons

Certified fitness and walking coach Michele Stanten promotes the idea of walking marathons to give walkers something big to aim and train for. Right now there are only a handful of walking marathons and half-marathons, but walkers are usually welcome at running marathons (nearly 40 percent of finishers in the Portland Marathon now walk). As America’s population ages and more folks discover the pleasures of walking, this idea is ready to take off.

12. Get more information and inspiration

To learn more about the value of walking, see the free online movie The Walking Revolution, and enjoy the recent reunion of The West Wing cast in a 2-minute sketchextolling the benefits of walking. The second National Walking Summit held in late 2015 drew more than 500 people representing several hundred organizations in 44 states, up more than 25 percent from the first summit in 2013. Contact info@AmericaWalks.org to learn how to connect with walking advocacy groups in your area.

This article is adapted from America’s Walking Renaissance: How Cities, Suburbs & Towns Are Getting Back on Their Feet, by Jay Walljasper, Heidi Simon, and Kate Kraft.