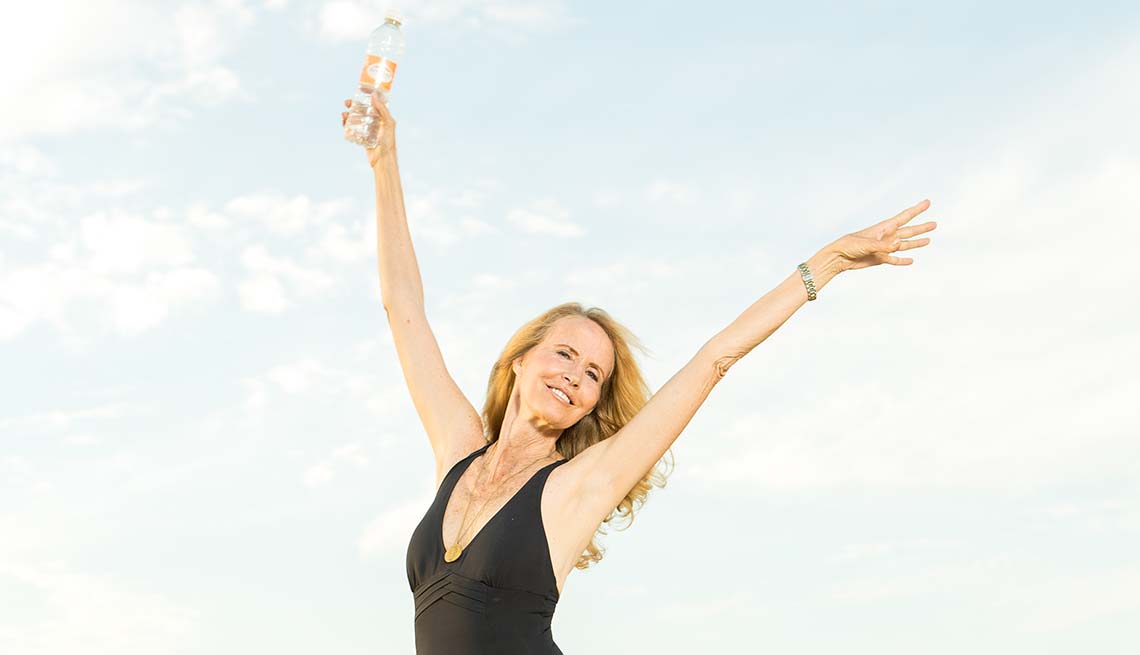 Olympic skier Suzy Chaffee is in the best shape of her life as a baby boomer.

En español | My baby boomer body is in the best shape it's ever been. I'm not as strong as I was when I downhill raced in the 1968 Grenoble Olympics and later was a world freestyle champion. But in the 40-plus years since, I've learned a lot about fitness and nutrition so I can stay in shape efficiently and enjoyably with my own regimen.

I live on a street I call "Everest," in Puerto Vallarta, Mexico, and I get in shape by running up the neighborhood hills every day with my dog, San Francisco. Uphill running minimizes the pressure on your knees, hips and back. It lets you get a fast workout by quickly raising your heart rate and fatiguing your legs and lungs. I also hold rocks or light weights to strength train while I do Zumba (an aerobic dance class) at a playground down the street. I love Zumba's Latino salsa vibe.

1. Cardio: Find a fun way to raise your heart rate 20 minutes a day.

3. Safe Stretch: Try yoga moves against walls or on the floor.

Because flexibility is the key to youthfulness, at night, before I go to sleep, I do 10 to 15 roll-ups on my bed. I rock back and forth to get momentum so my legs go up over my head, and I end in a supple yoga plow position. I add push-ups and leg circles — often done in Pilates workouts — that tone my legs and hip joints while strengthening my abs.

Most of my exercises have double benefits, especially "trashercizing." Since I moved here five years ago, I've been picking up plastic bottles and bags thrown in the streets, while I walk my dog. By doing side lunges or squats while picking them up, I'm toning my butt. I explain to curious onlookers, "I'm keeping our Vallarta paradise." I tell my friends, "This is how you get a Jennifer Lopez butt."

Skiing taught me early about the effects of injury on the body. I dislocated my hip in the World Cup Series of Ski Racing at Vail, Colorado, in 1967, when I was 20. It had rained the night before, and a dangerous bump formed on the course. I wasn't warned about it and had a spectacular crash, seen on ABC's Wide World of Sports. The local clinic couldn't put my hip back into the socket, so I had to be driven to Denver. The consequences played out 37 years later, when I had a hip replacement surgery in 2004, at 57. Fortunately, I don't need the other hip replaced, thanks to nano-technology.

I tell people to exercise in any way that makes them happy. It is often what they dreamed of as a child. I was a child ballerina who had fantasies of dancing down mountains on skis. So after the 1968 Olympics, I helped invent the ski ballet part of freestyle skiing. We all have unique gifts. And giving them back to humanity is the key to being psychologically healthy and staying joyfully youthful.

— As told to Jon Saraceno

Chaffee, 68, was captain of the U.S. Women's Olympic Ski Team in 1968 and is a three-time freestyle champion. She is a cofounder of the Native American Olympic Team Foundation.