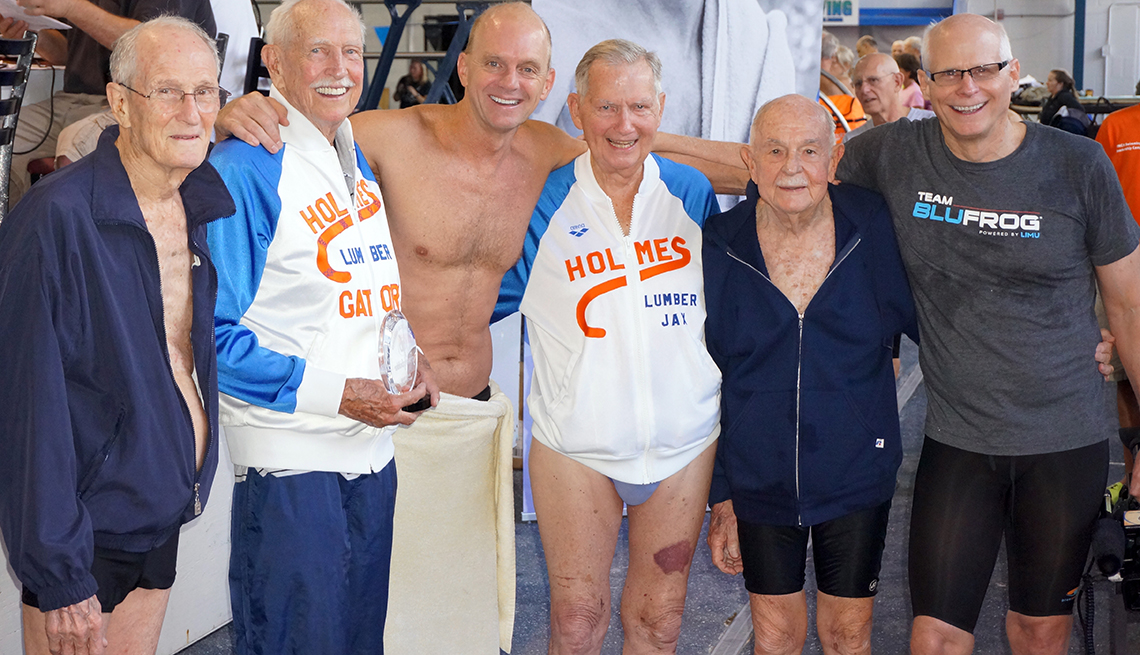 In 1924, Calvin Coolidge won election to the highest office in the land, the first Winter Olympics were staged and 3-year-old Tiger Holmes first learned to swim.

"I fell off a dock into the St. Johns River" in Jacksonville, Fla., the now-93-year-old Holmes remembers. "My daddy jumped in on top of me to save me and damn near drowned me." Clearly, Holmes didn't drown, but that incident led to swimming lessons, which in turn sparked a lifelong passion for swimming.

Nine decades later, Holmes is still swimming and he's inspiring adults of all ages to do the same. Last month, he and three teammates — 88-year-old Bill Adams, 90-year-old John Corse and 91-year-old Ed Graves, all of Jacksonville — set short-course world records in the men's 400- and 800-meter freestyle relays at the Sixth Annual Rowdy Gaines Masters Classic swim meet in Orlando. They also set national records in the 200 freestyle and 200 medley relays.

Relay age groups are determined by adding the ages of all four relay members; in this case, the relay clocks in at 362, an average age of 90.5 years. The 360-399 age group is the oldest category currently recognized by FINA, the international governing body for aquatic sports, and U.S. Masters Swimming, the national governing body for adult swimming.

"I don't think they went into this thinking that they were going to be an inspiration or role models, but that's part of the cool factor to it," says Rob Butcher, executive director of U.S. Masters Swimming. "The atmosphere was just electric" at the meet, he adds. The four swimmers received several noisy standing ovations from the crowd, as well as write-ups in the local newspaper and Swimming World magazine.

But while the records and the fanfare are nice, Holmes says his dedication to the sport these days is more about maintaining health and spending time with friends. The foursome has been swimming together three times a week at the Jacksonville Naval Air Station pool for the past seven years. Originally from Jacksonville, the four men knew of each other growing up and had even swum together at various points as children and younger men. All four went on to swim in college, but Adams, Corse and Graves left the sport after graduation.

When all four found themselves back in Jacksonville in the mid-2000s, they began swimming together at Holmes' insistence, which provided a perfect opportunity to reconnect with each other and the sport of swimming. "It's so much fun, and I just enjoy these guys so much," Holmes says. "We got into a routine and never got out."

Corse, a still-practicing attorney, says that meeting his friends at the pool three times a week is strong motivation not only to keep swimming, but also to keep living. "You have to keep moving or you can die," he notes cheekily. Often after their hour-long swim, the four will go out to lunch together, making their workouts a social affair as well.

Tying exercise to social interaction is a smart strategy, says physiatrist Jonathan Bean, associate professor at Harvard Medical School in the department of physical medicine and rehabilitation and the medical director of the Spaulding Cambridge Outpatient Center in Cambridge, Mass. "If people remain engaged in physical activity and they do it in a social way, it has tremendous benefits all the way around."

Bean also notes that "exercise is a behavior, and clearly, people who decide to stay mobile and stay active, that's better for their overall health and independence. There's no guarantee that they'll live forever, or that they're going to retain their physical functioning forever, but it's the best medicine we have for retaining physical function as people age."

Still, although they know it's good for them and wouldn't miss a workout, these four swimmers face many of the same motivational challenges the rest of us do from time to time. "Every day when I go swimming, I hate it when I start," says Adams, the self-described "baby of the group." "And every day when I finish, I feel good and I can't understand why I hated it at the start."

Teammate Graves agrees that it's not always easy, but says the thrice-weekly workouts have "helped me so much, because if I wasn't swimming, I think my aches and pains would be a lot worse than they are now."

All of them say they hope to continue swimming well into the future, despite the difficulties posed by the inevitable passage of time — because they're just plain having fun. They're not done setting records yet, either. "I want us to swim in the [400-plus age group]," Holmes says. "I have 6-1/2 years to go, and it would be nice to hit that."