En español | In the continuing battle over the new health care law, federal appeals court judges in Atlanta today oral heard arguments in a key multi-state lawsuit challenging the constitutionality of the law. 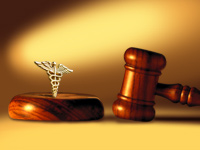 The debate over the legality of the new health care law continues in the courts.

A panel of three judges in the 11th U.S. Circuit Court of Appeals heard oral arguments from lawyers for more than half the states and from lawyers for the federal government. In a battle largely waged along partisan lines, most states involved in the challenge lean toward the GOP, either with a majority of Republican voters or Republican attorneys general.

At issue is whether Congress had the authority to require nearly every American to buy health insurance in 2014, the so-called individual mandate. The plaintiffs — Florida, joined by 25 states, the National Federation of Independent Business and two individuals — won a victory Jan. 31 when U.S. District Court Judge Roger Vinson in Pensacola, Fla., ruled the entire Patient Protection and Affordable Care Act unconstitutional. Congress overstepped its authority in imposing the mandate, Vinson wrote. "The Act, like a defectively designed watch, needs to be redesigned and reconstructed by the watchmaker."

The Obama administration appealed, and the 11th Circuit in Atlanta granted an expedited review of the case. If the appellate court rules quickly, the case could reach the Supreme Court by early October.

Both sides have filed numerous briefs and responses, and scores of interested parties — including AARP, members of Congress, state legislators, health care providers and legal and business groups — have filed friend-of-the-court briefs.

In the suit, the states argue that if Congress is allowed to require individuals to purchase insurance, Congress also could order people "to eat more vegetables and fewer desserts, to exercise at least 45 minutes per day, to sleep at least eight hours per day, and to drink one glass of wine a day but never any beer."

Next: Dozens of challenges to the new health care law. >>

Lawyers for the federal government scoff at such "far-fetched hypothetical statutes." They maintain the individual mandate to buy insurance lifts the burden taxpayers now shoulder in paying tens of billions of dollars annually for medical care of the uninsured.

They also argue that states opposing the mandate risk leaving the uninsured "on the street after a car accident," and that "would be far more draconian than the tax penalty that Congress enacted" for those who fail to buy health insurance.

More than two dozen provisions of the law took effect last year, including allowing dependents up to age 26 to remain on their parents' insurance, new free health screenings for Medicare beneficiaries, cutting the costs of drugs in the Medicare prescription drug coverage gap known as the doughnut hole, and a new 10 percent tax on indoor tanning services. Another 21 provisions are scheduled to go into effect this year.

Vinson's ruling in Florida threw the states into confusion, with some officials declaring the law dead and others saying they would continue to implement it. On March 3, the judge clarified that the law remained in effect, pending the appeal.

Even as states have created task forces to implement major provisions — including how to establish insurance exchanges, step up insurance regulation and expand Medicaid — about 600 measures have been introduced in state legislatures around the country to limit, alter or oppose the law, according to the National Conference of State Legislators.

Dozens of legal challenges have been filed in the federal court system. U.S. district courts have overturned the law or part of it in two cases, ruled the law constitutional and dismissed six cases, dismissed eight cases for procedural issues, and dismissed but gave the parties the right to refile in one case, according to the Kaiser Family Foundation, which is tracking 26 cases. A decision is pending in nine cases.

Next: AARP's arguments for the new health care law. >>

Oral arguments were heard June 1 in the 6th Circuit in Cincinnati in a case from eastern Michigan, and the 3rd Circuit in Philadelphia just dismissed a case from New Jersey.

Oral arguments in federal appeals courts have been heard in two cases, both in Richmond, Va. The three randomly selected judges in Richmond turned out to be Democratic appointees, which may provide an advantage to the federal government attorneys. The three randomly selected judges in the 11th Circuit case are Chief Judge Joel Fredrick Dubina, appointed to the bench by President George H.W. Bush in 1990 and chief judge since 2009, and Frank M. Hull and Stanley Marcus — both appointed by President Bill Clinton in 1997, although Marcus is a Republican.

In documents filed in the Atlanta court, the Obama administration argues that the penalty for not buying insurance is a tax collected by the Internal Revenue Service, and that Congress has authority to levy taxes. The states argue that the mandate is "indefensible as an exercise of Congress's taxing power" because "the mandate is not a tax; it is a requirement that individuals engage in particular conduct."

In its brief, AARP argues that the new health care law particularly helps those 50 to 64 who lack employer-provided insurance and are denied it because of their age or preexisting conditions.

Stuart Cohen, AARP senior vice president for legal advocacy, said: "If the health care law was eliminated, our members and Americans 50-plus would lose important improvements that crack down on Medicare fraud, help seniors with high drug costs, make preventive care free of charge for more Americans and give people new options to plan for their long-term care needs.

"When everyone has health coverage, we can keep insurance companies from charging much higher rates simply because of a person's age or gender, denying coverage due to preexisting conditions, or dropping coverage when someone gets sick," he said.

Marsha Mercer is a writer in Northern Virginia who covers public policy issues.