Certain fruits, veggies, snacks and drinks can be problematic when combined with some common medications 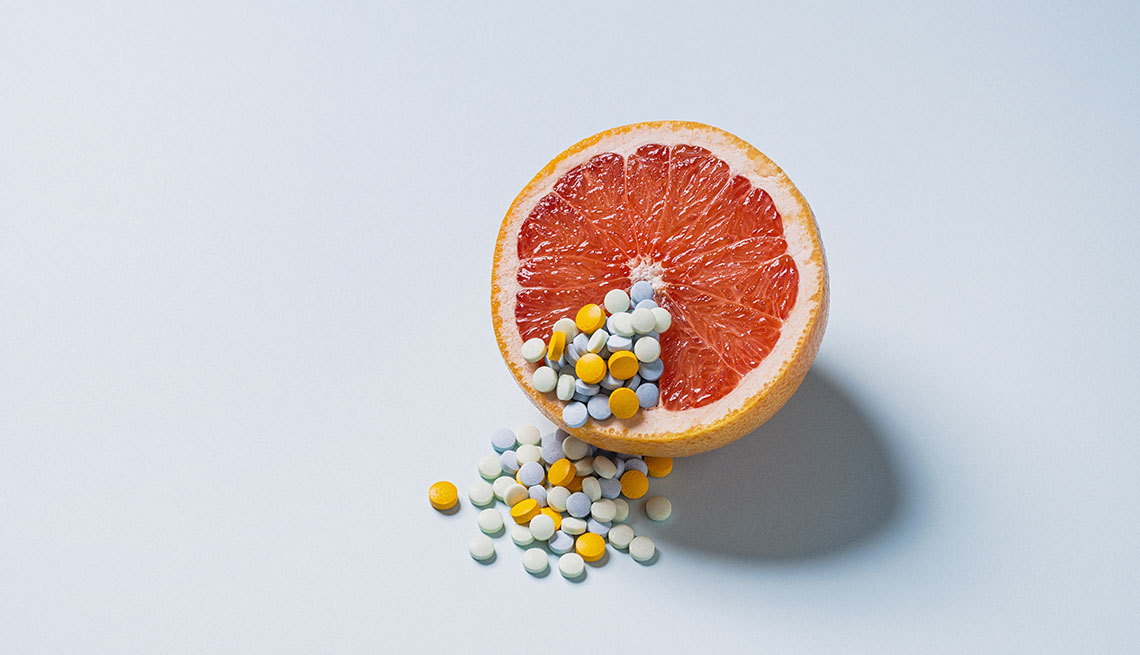 It’s routine to ask your doctor or pharmacist if a new prescription drug could interact with other medications you’re taking. But have you inquired about potentially problematic foods? It turns out, a handful of commonly consumed fruits, veggies, snacks and drinks can affect the way medicines are absorbed or metabolized in the body.

“It’s an issue that’s not on a lot of people’s radar screens. Honestly, it’s not on many doctors’ radar screens, either,” says Bethanne Brown, a professor of pharmacy practice at the J.L. Winkle College of Pharmacy at the University of Cincinnati. “This information can be found in the packet you receive when you pick up your prescription from the pharmacy, but it can get lost in all the written information provided.”

It’s especially important for older adults to be aware of potential food-drug interactions. Research from the Lown Institute shows that 42 percent of U.S. adults 65 and older take five or more prescription drugs per day and nearly 20 percent take 10 or more, complicating matters when it comes to remembering how to take each medication.

In some cases consuming a specific food could make a particular drug less effective or potentially increase blood levels of the drug. In other instances the combination could trigger bad, or even dangerous, side effects. That’s why it’s important to always ask your doctor or pharmacist if there are any foods that can interact with the medicines you’re taking.

In the meantime, here are some commonly used medications and the foods and beverages that could create a problematic pairing.

1. Dairy and some antibiotics

With antibiotics in the tetracycline class (including doxycycline and minocycline, which are prescribed to treat bacterial pneumonia and other infections) and ciprofloxacin (from the quinolone class, also prescribed for pneumonia and other infections), the calcium in dairy products like milk, cheese and yogurt could inhibit drug absorption, which could compromise the medication’s ability to treat your infection effectively.

Your best bet is to avoid calcium-containing foods an hour before, or two hours after, taking one of these antibiotics, Brown says.

Among the most well-known food-drug interactions is the anticoagulant warfarin (brand names Jantoven and Coumadin) and foods containing vitamin K, such as broccoli, cabbage, kale, spinach, swiss chard, seaweed and other leafy greens. Certain vegetable oils also contain large amounts of K. These vegetables can reduce the effectiveness of the commonly prescribed medication, thus inhibiting its ability to stop or prevent blood clotting, explains Dima Qato, an associate professor at the University of Southern California School of Pharmacy and a senior fellow at USC’s Schaeffer Center for Health Policy & Economics.

Before you ditch these foods entirely, ask your doctor whether you should avoid them (or any others) while taking warfarin, or whether you can regularly consume moderate amounts. Some experts now advise people taking warfarin to be super consistent in the amount of vitamin K they consume through food, avoiding large amounts at one time. So, “If you like salad, have it three times a week and the same amount each time,” Brown advises, and your warfarin concentration should stay steady.

An older class of antidepressants called monoamine oxidase inhibitors (MAOIs) can have dangerous interactions with foods that contain high levels of tyramine, an amino acid. Taking MAOIs and consuming tyramine-rich foods can lead to a high tyramine level in the body, which can trigger a sudden, dangerous increase in blood pressure. Foods that are high in tyramine include smoked and ﻿cured meats, aged cheeses, fermented foods, red wine, some draft beer, soy products (soy sauce, miso, tofu) and very ripe bananas. These days, MAOIs aren’t used as frequently to combat depression, but they are sometimes used to treat Parkinson’s disease. If you’re taking an MAOI, it’s best to avoid these foods, Brown says. You can also ask your doctor for a complete list of dietary restrictions.

Consuming grapefruit or grapefruit juice can inhibit an enzyme that’s necessary for statins to be metabolized, Qato cautions. As a result, “the drug stays in the blood and accumulates, increasing the risk of side effects such as muscle pain.”

Of the statins, atorvastatin, lovastatin and simvastatin (common brand names Lipitor, Altoprev/Mevacor and Zocor) are the most problematic as far as grapefruit juice goes. To be on the safer side, patients are often advised to avoid grapefruit and grapefruit juice entirely while taking statins, Qato says.

Grapefruit can cause problems when mixed with other medications, too. A few include some antianxiety drugs, such as BuSpar, and certain corticosteroids that treat Crohn’s disease or ulcerative colitis, such as Entocort EC and Uceris tablet (both budesonide), according to the U.S. Food and Drug Administration.

5. Bananas and other potassium-rich foods, plus ACE inhibitors

If you take blood pressure-lowering ACE inhibitors with potassium-rich foods, including bananas, avocados, tomatoes and dried apricots, you can get high potassium levels in your body, which can lead to potentially dangerous heart arrhythmias, Brown warns. That’s why it’s wise to limit your intake of potassium-rich foods while taking an ACE inhibitor. It’s recommended that some ACE inhibitors, such as captopril and moexipril (brand names Capoten and Univasc), be taken at least an hour before meals.

If you’re taking a calcium channel blocker (another type of hypertension drug), steer clear of grapefruit juice because it can render the drug ineffective, Qato says. Also, if you’re taking the beta blocker atenolol (Tenormin) or the renin inhibitor aliskiren (Tekturna), you should know that drinking apple juice or orange juice could decrease levels of the drug in your body.  ​

In a lesser-known interaction, some of the newer generation of antihistamines﻿ — namely, fexofenadine ﻿(Allegra﻿) — can also interact with acidic juices, such as apple juice, orange juice and grapefruit juice, Qato says. “These acidic juices could affect absorption and neutralize the effect of antihistamines so they don’t really work.” If you’re seeking allergy relief, Qato advises avoiding these juices within two to four hours of taking one of these antihistamines.

Consuming soybean flour, walnuts and other high-fiber foods can make levothyroxine — a drug listed under several brand names that is used to treat an underactive thyroid gland — less effective. The same is true if you’re taking digoxin, which is sold under several brand names and is used to treat heart failure. High-fiber foods can affect a person’s absorption of the drug, Qato explains, so your best bet is to take digoxin at least two hours before or after consuming meals or snacks that are loaded with fiber.

In an often overlooked phenomenon, certain medications can interact with the vitamins and minerals that are added to everyday foods like breakfast cereal, bread and milk — especially calcium, iron, magnesium and zinc.

And while “the prescription label may warn you not to take the drug with calcium or iron, it doesn’t mention fortified foods,” where these nutrients often hide, Brown says.

The trouble is, if you have an infection and take an antibiotic like tetracycline, doxycycline or ciprofloxacin along with calcium-fortified orange juice or a super-fortified energy bar, cereal or smoothie, the minerals may bind with the drug and inhibit its absorption in the body, Brown explains. This increases the chances that the treatment could fail or be insufficient to produce optimal results. And if you consume multiple fortified foods in the same meal, this could have a pronounced effect on your body’s ability to absorb the medication.

The best ways to protect yourself from this risk: If a drug’s package insert warns you not to take the medication with calcium supplements, antacids, iron-containing supplements or dairy products, “that’s a red flag that there could be an interaction with fortified foods that contain the same nutrients,” Brown says.

It’s also wise to ask your pharmacist or doctor if you should avoid certain nutrients close to the time that you take the medicine. To be on the safe side, your best bet is to take the drug an hour or two before having calcium-fortified juice, a fortified cereal or a nutrient-dense energy bar or drink — or to wait three hours after having the food or beverage to swallow the drug. That way, “your body will have enough time to absorb the medication,” Brown says.

Some over-the-counter flu remedies can elevate pressure, interfere with meds

Rxs ﻿That Can Land You in the ER