En español | Sharon Rosen is pushing 70, but she has the hormones of a woman half her age, assuming that woman had especially hard-working ovaries. The retired elementary school teacher from South Windsor, Conn., rubs estrogen and progesterone creams on her skin every morning and evening. At bedtime, she applies another cream of estrogen and testosterone with a progesterone pill as a topper. 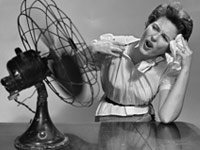 The hormones, she says, have turned her into a new, younger version of herself: Her infernal head-to-toe hot flashes are gone, her libido is back and her mind isn't nearly as fuzzy as it was a few years ago. She'll still occasionally lose a train of thought, she says, "but now I'm doing better than my husband. I tell him that he should be seeing my doctor."

Rosen's pills and creams exactly match the hormones her body once made naturally. That makes them "bioidentical," a buzzword that has been making the rounds through talk shows and magazines and doctors' offices for several years now. In 2008, Endocrine Today reported that a million or more American women were taking bioidentical hormones, and demand for the treatment certainly hasn't waned since then. If anything, it's soared.

Many so-called bioidentical hormones haven't been approved or tested by the Food and Drug Administration, but their appeal is obvious. Practitioners — including Rosen's doctor, Alicia Stanton, M.D. — promote them as safe, natural alternatives to traditional hormones such as Premarin, a prescription estrogen that's isolated from the urine of pregnant mares, and Provera, a synthetic version of progesterone.

"They do all of the things they are supposed to do," says Stanton, a board-certified ob-gyn in Hartford and fellow of the American College of Obstetrics and Gynecology. "I don't understand how someone could say that something that's different than what our bodies make could be any better for us."

But are bioidenticals really a healthy option? Cynthia A. Stuenkel, M.D., a clinical professor of medicine at the University of California, San Diego, and former president of the North American Menopause Society, has her doubts — to put it mildly. The problem: Most bioidentical hormones are sold without the controls, safeguards and testing required of prescription drugs. "Are they safe? Do they work? That's never been shown in any real way," she says.

Stuenkel's not the only skeptic. The American Medical Association, the Endocrine Society and the American College of Obstetrics and Gynecology have all taken strong stands against unapproved bioidentical hormones. A position paper from the Endocrine Society — an organization representing over 14,000 hormone experts from around the world — concluded that there are "no published studies in peer-reviewed literature" showing that bioidentical hormones are less risky or more effective than FDA-approved hormones.

The term "bioidentical" usually refers to hormones that have been mixed together or "compounded" at a pharmacy. Following a doctor's instructions, the pharmacist can make the pills and creams extra strong or extra weak or somewhere in between. The pharmacist can customize in other ways, too, such as replacing the usual peanut oil in gel caps with olive oil. The estrogens and progesterone used in these compounded preparations are, in fact, identical in every way to the hormones found in a woman's body. But it's a bit of a stretch to call them natural. They're created in laboratories by chemists who tinker with plant hormones from yams or soy plants.

It's important to note that there are several FDA-approved hormones that are also exactly the same — molecule for molecule — as natural hormones. Examples include Estrace pills, Estrasorb topical cream and the Alora patch. "The term 'bioidentical' is really a misnomer," says Nanette Santoro, M.D., chair of the department of obstetrics and gynecology at the University of Colorado in Denver and a spokesperson for the Endocrine Society. "The real issue is pharmacy-compounded hormones versus those that have been FDA approved."

Compounded hormones have been around for decades, but interest in them surged in 2002 after researchers published the startling results of the Women's Health Initiative. The study of more than 16,600 postmenopausal women found that taking a combination of estrogen and progestin increased the risk of breast cancer by about 25 percent. Surprisingly, the combination also more than doubled the risk of heart disease in the first two years. "The WHI made some doctors as well as many patients a little disenchanted and distrustful of standard hormones," Stuenkel says.

As researchers continued to follow the women involved in the WHI, the news only got worse. A study published in the Journal of the American Medical Association in October 2010 found that when women taking Prempro developed breast cancer, the cancer was likely to be unusually aggressive. On the whole, women on the hormones were about twice as likely as other women to die of breast cancer within eight years. "Most of the deaths occurred more than five years after starting hormone treatments," says lead researcher Rowan Chlebowski, M.D., a medical oncologist with the Los Angeles Biomedical Research Institute at Harbor-UCLA Medical Center. "We could be seeing a lot more of these [deaths] as time moves forward."

Although such results are alarming, they shouldn't change the current approach for hormone therapy, says study coauthor JoAnn Manson, M.D., professor of medicine at Harvard Medical School and chief of preventive medicine at Brigham and Women's Hospital in Boston. Manson is also the president-elect of the North American Menopause Society.

"I've been getting a lot of e-mails from patients wondering how this study applies to them," she says. As before, she says, women should take combination hormone therapy only if they have moderate-to-severe menopausal symptoms. And they should get the lowest doses for the shortest time possible. She reassures women taking estrogen by itself — a common approach for women who have had hysterectomies — that estrogen alone doesn't seem to promote breast cancer.

When patients ask about bioidentical hormones, Manson tells them they're in uncharted territory. Although there's some early evidence that the micronized progesterone Prometrium — a bioidentical hormone — may be less likely than Provera to cause breast cancer, Manson says she's still "working from the assumption that bioidentical hormones are just as dangerous until proven otherwise. And the proof just isn't there."

Promoters of compounded hormones often claim that their treatments carry none of the risks of Premarin and Provera. John Woodward, M.D., a board-certified ob-gyn practicing in Dallas, has been giving his patients compounded hormones — most often estradiol pellets injected under the skin — since the early 1970s. On his website, Woodward points to unpublished tests at the respected Cooper Clinic in Dallas in the 1990s showing that his patients tended to have stronger bones and cleaner arteries than other women of the same age.

Woodward says his patients "just feel better" on bioidentical hormones. One of his patients, Connie Hibbs, a 67-year-old artist living in Dallas, has been taking Woodward's estradiol pellets for more than 30 years. "I don't feel any different now than I did when I was 35," she says with a youthful laugh. She started taking hormones in her 30s because she was worried about her bones. "Everyone on my mother's side of the family crumpled from osteoporosis," she says. "Now my bone scans are perfect."

But even Woodward sees a downside to the bioidentical industry. "A lot of people out there don't know what they're doing," he says. For example, he says, many prescribers base their doses on saliva tests that supposedly measure their patient's hormone levels. But in his opinion — and the opinion of groups such as the Endocrine Society — such tests are unreliable and potentially misleading. He also notes that many prescribers are "naturopaths" or self-described anti-aging specialists, not board-certified endocrinologists or ob-gyns.

The unknowns surrounding compounded bioidentical hormones make them potentially riskier than standard treatments, Stuenkel says. "At least with FDA-approved hormones, you know what's in the stuff," she says. "They have to follow manufacturing standards." Because compounded hormones are made up on the spot, there's a lot more room for error, adds Santoro. "The dosing isn't that predictable from person to person," she says. Santoro cautions that even if a woman feels terrific with her treatment, she may be getting more hormones than she really needs. That's a problem, she explains, because too much estrogen can lead to uterine cancer. Conversely, a women who is getting shortchanged on hormones could be losing bone mass and missing out on the relief that hormones can bring.

Piera Graven, a 58-year-old operations manager in a New York City medical clinic, tried compounded bioidentical hormones last year to ease her hot flashes. "I thought it would be better to try something natural," she says. But the treatments didn't work, so she turned to Santoro who was still in New York at the time. A combination of Prometrium (a prescription version of progesterone) and a Vivelle Dot estrogen patch did the trick. "I still get hot flashes, but they're nothing like what they were," she says.

Santoro says that the results of the WHI study forced doctors everywhere to take a step back and rethink their approach to hormones. She tries to find the lowest doses that will bring relief, and she'll go through as much trial and error as it takes to find the right approach for each patient. There's no buzzword for her approach, but, she says her patients don't seem to mind.

Chris Woolston is a freelance health writer whose work has appeared in the Los Angeles Times and  Reader's Digest.