Is Taking a Weight-Loss Drug Right for You?

If diet and exercise don’t work, adding in a prescription medication may be able to help 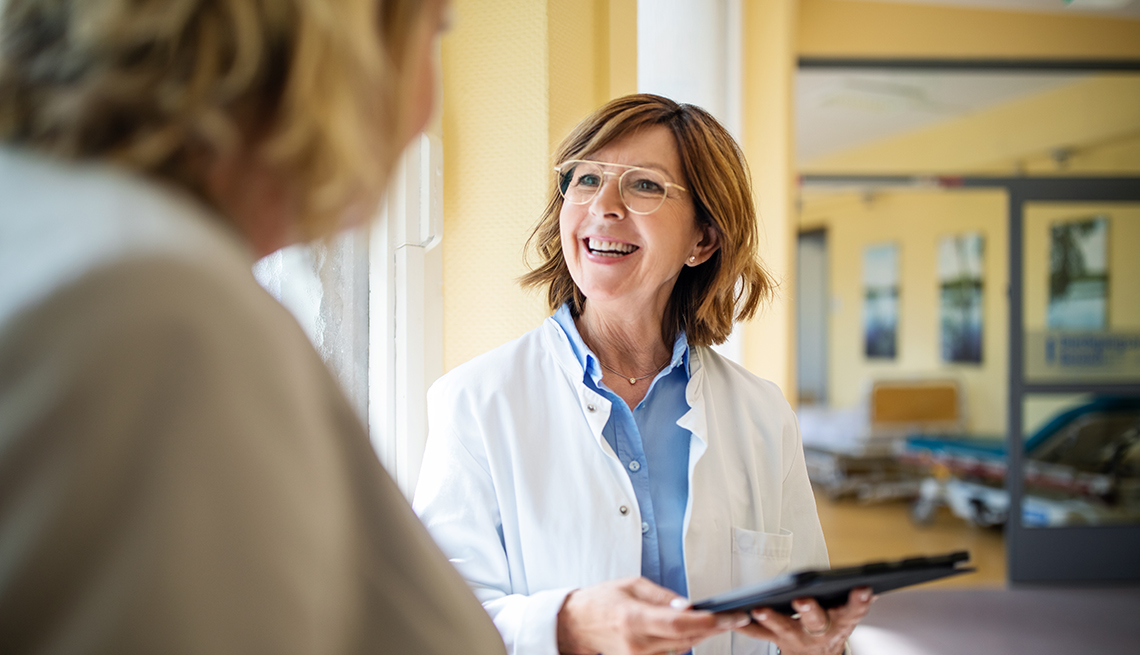 It’s not uncommon for Fatima Cody Stanford to see patients who, for years, have tried dozens of different diets and workout routines only to find that the needle on the scale still won’t budge — or if it does, it won’t stick.

“Unfortunately, we have this idea that diet and exercise solve obesity,” says Stanford, M. D., an obesity medicine physician scientist at Massachusetts General Hospital in Boston and an associate professor of medicine and pediatrics at Harvard Medical School. But for many people, it’s more complex than that.

Everything from genetics to stress to competing health conditions — even age — can make it hard to shed excess pounds. And when diet and exercise don’t deliver, a prescription may be able to help.

A new generation of drugs is helping some people with obesity (which is defined as having a body mass index, or BMI, of 30 or greater) lose more weight and﻿, in turn, reverse other related health conditions associated with obesity, like heart disease, diabetes and sleep apnea.

Experts say the potential of these medications could be dramatic and far reaching, given that obesity affects more than 40 percent of U.S. adults and puts a $173 billion strain on the health care system each year. Among adults ages 60 and older, obesity is even more common, affecting about 43 percent of the older population.

Here’s what you need to know about weight-loss medications and whether you should talk to your doctor to see if one might be right for you.

There’s a new generation of drugs

Several prescription medications have been approved for long-term use by the U.S. Food and Drug Administration (FDA) to help treat obesity. But it’s a class of injectable drugs that mimic a hormone called glucagon-like peptide-1 (GLP-1) that has “generated a lot of enthusiasm,” says Dina Griauzde, M.D., an assistant professor of ﻿internal ﻿medicine at the University of Michigan Medical School and an internist at the VA Ann Arbor Healthcare System. And that’s because they can be about twice as effective as some of the older medications on the market.

For example, people who use semaglutide (brand name Wegovy), which is one of these new GLP-1 drugs, shed, on average, about 15 percent of their body weight over the course of several months — that’s about 30 pounds for a 200-pound person. Losing just 5 to 10 percent of body weight can improve blood pressure, cholesterol and blood sugars, according to the Centers for Disease Control and Prevention.

The drug works by targeting the areas of the brain that regulate appetite and food intake. Semaglutide also help﻿s to lower blood sugar levels, which is why it and liraglutide (brand name Saxenda), another GLP-1 medication that’s FDA﻿-approved for weight loss, have bee﻿n used for years as a treatment for type 2 diabetes.

Another GLP-1 medication, known as tirzepatide, hasn’t yet been cleared by the FDA for obesity treatment, but like liraglutide and semaglutide is an FDA-approved diabetes drug. A recent study﻿ published in ﻿The New England Journal of Medicine found that it led clinical trial participants to lose, on average, about 20 percent of their body weight.

It’s important to note, however, that these newer drugs don’t work wonders on everyone, and that some of the weight-loss drugs that have been around longer are still very effective in certain individuals. “With all of these medications, there’s wide variation in outcomes,” Griauzde says. “We’re never going to have a one﻿-size﻿-fits﻿-all approach to obesity.”

The FDA has approved five drugs for long-term use. They include:

A sixth approved drug, setmelanotide (IMCIVREE), is limited to people who have been diagnosed with a rare genetic disorder. A handful of other medications are approved for short-term use.

Source: National Institute of Diabetes and Digestive and Kidney Diseases

It’s uncommon for obesity to be treated with medicine

Despite their effectiveness, few people are using drugs to treat obesity. In fact, a 2021 Mayo Clinic Proceedings study conducted by a team of researchers, including Stanford, found that only about 1 percent of qualifying adults are prescribed an anti-obesity medication to treat the chronic condition.

Given that the prevalence of obesity is expected to increase to nearly 50 percent by 2030, Stanford says we’re far from reaching “any significant potential within the population if only 1 percent are getting these drugs.”

Obesity raises the risk of developing heart disease and cancer, the two leading causes of death in the U.S. It’s also a risk factor for developing complications from COVID-19, which is the number three killer among Americans.

“We’re just not utilizing the tools for the size of the problem,” Stanford adds.

Experts point to several reasons why these drugs are underutilized. Access is a big one. Although some of these medications have been available for years, many patients don’t know they exist, so they aren’t asking their doctors about them, Stanford says. And many doctors aren’t prescribing them because obesity often isn’t treated like other chronic diseases, even though the American Medical Association declared it one nearly a decade ago.

“When someone comes in with really poorly controlled type 2 diabetes, I don’t just tell them to go eat less and exercise more; I treat their disease. But we don’t do the same with obesity,” says Stanford, who also points out that very few doctors are trained in obesity medicine.

The stigma surrounding the disease plays a role. There’s a pervasive belief that obesity is an issue of motivation or willpower, experts say. “I think some providers are fearful of even bringing up the topic of weight, because they don’t want to offend the patient,” Griauzde adds.

Then there’s the cost of the drugs. The newer GLP-1 drugs can ring in at around $1,﻿300 a month﻿, and most insurance plans won’t cover them when they’re prescribed for obesity. (Many plans, however, do cover them when they’re prescribed for diabetes under a different brand name and a slightly different dose. Stanford acknowledges that this can be a work-around for some patients.)

“I have never met someone who has said, ‘I can afford that. I’ll just buy it out of pocket.’ Honestly, not one patient,” says Lauren Oshman, M.D., a family physician and associate professor in the University of Michigan Department of Family Medicine.

Even insurance coverage for some of the other FDA-approved obesity drugs remains spotty, research shows, though they are not as expensive as the GLP-1 medications. Medicare doesn’t cover obesity medication, though it will cover some bariatric surgical procedures.

How to talk to your doctor about weight-loss drugs

If you’ve struggled with weight loss and are interested in learning about treatments that may be able to help, don’t shy away from broaching the subject with your doctor, Stanford says, especially if you have other health conditions that could improve with weight loss.

Medications are typically prescribed only for people with a BMI of 30 or greater, or for individuals with a BMI of 27 or greater who have weight-related health problems like type 2 diabetes or high blood pressure, according to the National Institute of Diabetes and Digestive and Kidney Diseases (NIDDK).

Where you store your fat could also impact whether your doctor prescribes a medication. Fat around the middle is the most dangerous, Griauzde explains, and so treating it could help thwart other health issues.

“If somebody’s holding fat in their thighs, their buttock, and they don’t have metabolic complications — they’re not having high blood pressure, they’re not having diabetes — there may be less of a reason to prioritize weight management for that patient,” Griauzde says. Unless, she adds, it’s a priority for the patient.

Know, too, that medications don’t replace physical activity or healthy eating habits as a way to lose weight. Studies show that these drugs work best when combined with a lifestyle program, the NIDDK says. And just like all medications, they can come with side effects. Common ones include nausea, diarrhea, vomiting, constipation, stomach pain and headache, though the side effects vary from drug to drug and from person to person.

If you don’t have success with one medicine, your doctor may try another, or even a combination. And if you find one that works, you could be on it indefinitely.

Finally, if your doctor isn’t receptive to helping treat your obesity, consider seeing a doctor who specializes in obesity medicine. The Obesity Action Coalition has a search function that can help you find an expert in your area.

Oshman says that with more treatment options coming to light, “it’s a very exciting time.” Still, she adds, “there’s a lot of work for us to do,” both in terms of educating patients and physicians.

In the meantime, Stanford wants people who have been struggling with their weight to know that it’s not their fault. “So many people … feel like this is their fault, like it’s a moral failing on their part,” she says. “And I really want to change that thinking and say, ﻿‘This is not your fault. [It’s a biological issue] so let’s help regulate your biology better.’ ”

8 Types of Drugs That May Cause Hair Loss

Suddenly losing your hair? The culprit could be your prescription medications

The Dangers of Soda

A daily soft drink is more harmful than you think