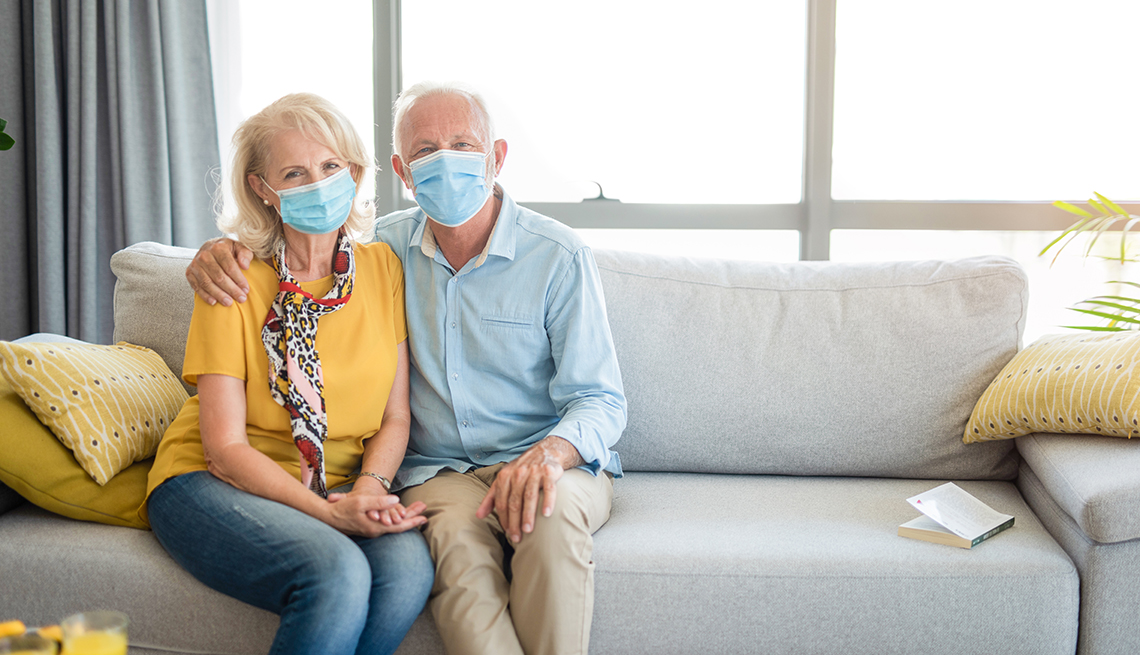 Older adults have been particularly hard hit by the COVID-19 pandemic. They’re at a far higher risk of experiencing complications from the virus, and many have suffered from the mental health effects of isolation from families and friends. About 25 percent of people in their 60s reported having symptoms of anxiety in the previous seven days, for instance, in a February Household Pulse survey by the National Center for Health Statistics (NCHS) and the Census Bureau.

But the older population has held up remarkably well compared with the population at large, experts say. In fact, adults ages 18 to 29 were far more likely to report symptoms of anxiety in the survey: Almost half — 47 percent — did so.

“You would think that older people would do worse than younger people mentally,” says Dilip Jeste, M.D., director of the University of California San Diego Center for Healthy Aging. “But research has shown the exact opposite.”

A separate June survey from the Centers for Disease Control and Prevention (CDC) of 5,470 community-dwelling adults across the U.S. found that those age 65 and older were significantly less likely to report symptoms of anxiety (6.2 percent) and depression (5.8 percent) than adults ages 18 to 24 (49.1 percent and 52.3 percent, respectively).

Older adults were also less likely to report having had suicidal thoughts in the 30 days before completing the survey — 2 percent of those 65 and up versus 25.5 percent of the youngest group.

Ipsit Vahia, M.D., medical director of Geriatric Psychiatry Outpatient Services at McLean Hospital and of the McLean Institute for Technology in Psychiatry in Belmont, Massachusetts, has reviewed a number of studies from around the world — including the aforementioned CDC report — and found “an uncannily consistent finding”: Older adults seem to have experienced the lowest rates of negative mental health impact, at least during the early stages of the pandemic.

Why resilience may come with age

What is behind this psychological strength? It may be that as years go by, we learn coping strategies, says Erin Emery-Tiburcio, Ph.D., codirector of the Center for Excellence in Aging at Rush University Medical Center in Chicago. “These are folks who have lived many more decades and seen and experienced a lot of things, and have figured out how to get through difficult times,” she surmises. “They are able to get less frustrated with the day-to-day, because they have a bigger picture of life to look at: ‘Yeah, I remember having gone through this before, and it’s going to be okay.’ ”

Wisdom also may grow with age, says Jeste, who believes that wisdom can manifest itself as qualities associated with resilience, such as control over one’s emotions, the ability to self-reflect, and the ability to accept different perspectives.

There’s also compassion, notes Jeste: “If I see somebody who is sad and help that person, that is compassion.” Indeed, research that Jeste has conducted, published in a 2020 issue of Aging and Mental Health, has found that wisdom and loneliness trend in opposite directions. “People who have wisdom aren’t lonely — and that’s especially true for the compassion component,” he says. “If you call somebody and reach out to them, the other person is grateful and you, in turn, feel good about that. You’re also establishing a stronger social connection and don’t feel as lonely, so you’re getting a psychological benefit.”

Of course, many older people are struggling during the pandemic, despite their years of wisdom and experience. If you’re among them, experts suggest these 10 strategies for getting through difficult times.

Maintaining social connections is crucial for one’s psychological well-being. “Older adults who are able to use devices like smartphones or computers — and learn video-based communication — are better able to mitigate the impact of loneliness and isolation to a degree,” says Vahia. Learning how to navigate Zoom and similar programs is important not only for staying in touch with friends and family, he notes, but for keeping remote doctors’ appointments. (Many mental health professionals are also offering their services remotely.)

“The importance of physical activity in maintaining a positive mood has been well-established,” says Vahia. He adds that studies during the pandemic found that “those who were able to be more physically active did better, especially during the summer months, when it is possible to go outside easily in most parts of the country.” (It can even be as easy as walking in place while you watch your favorite TV show.)

Self-determination is also important when it comes to coping, notes Camille Vaughan, M.D., associate professor of medicine and division director of Geriatrics & Gerontology at Emory University School of Medicine. “The ability to create a daily routine, with regularly scheduled activities, can help people in these uncertain times,” she says. “It’s something that you feel you can control in the midst of it all.”

Spirituality, doesn’t need to be about religion. It’s about feeling constantly connected to something or someone, says Jeste. “It can be God or nature or your soul. Even if you’re not surrounded by other people, you can still feel connected — and if you feel connected, you’re never lonely.” Meditation, yoga, tai chi and other types of mindfulness can help manage mild depression.

While swallowing a pill or having a stiff drink may appear to take the edge off, it can actually exacerbate depression. Keep alcohol and drug use to a minimum.

For mild symptoms or the occasional day when you feel down, look for ways to express gratitude, says Vaughan. She suggests noting the things you are thankful for in a gratitude journal as “a way of giving yourself a different perspective during this difficult time ... It could be something really small — for example, appreciating how flowers are starting to bloom, reminding you that a new season is upon us and that you’re thankful for each day.”

“Studies have shown that multigenerational activities are helpful for both generations,” says Jeste. He adds that younger people can benefit from the wisdom of older adults, who in turn can learn new things from and be energized by the younger crowd. (Just be sure to wear those masks!)

Yes, keeping up with the latest news about what’s happening with the COVID-19 pandemic is important but don’t saturate yourself with sobering news. Find a few trusted news sources and tune in, says Vaughan. “Just don’t keep them on your TV all day.”

“You shouldn’t have to feel like you need to manage depression on your own,” says Vaughan. “Get support if you need it.” Those experiencing serious depressive symptoms may want to talk to their primary care practitioner about getting professional care. A range of interventions, such as therapy, can be highly effective, though getting an appointment during the pandemic can sometimes be difficult, due to surging demand.

“The weight of the pandemic is something we all carry with us all the time,” says Emery-Tiburcio. But getting inoculated can help lighten the emotional load. “I’ve heard people say, ‘Now that I’ve been vaccinated, I don’t have to move around my community in constant fear that I could be the next one in the ICU,’ ” says Emery-Tiburcio. What’s more, as Anthony Fauci, M.D., director of the National Institute of Allergy and Infectious Diseases, has noted, if you are vaccinated, you can safely spend time with others who’ve been vaccinated (and in some cases, unvaccinated people).

But take it slow: “After folks get vaccinated, there may be this kind of ‘kid in a candy store’ idea of ‘I can go out and do all these things now,’ ” says Emery-Tiburcio, “Trying to do everything can wear you out. Take a measured approach to reentry. Think about what is most important and what will create the most meaning, and engage in those activities.”

How to Take Care of Your Mental Health

New problems may arise as the pandemic progresses