Click on icon to access free audio version of this article. Check out the entire AARP on Audible Collection. 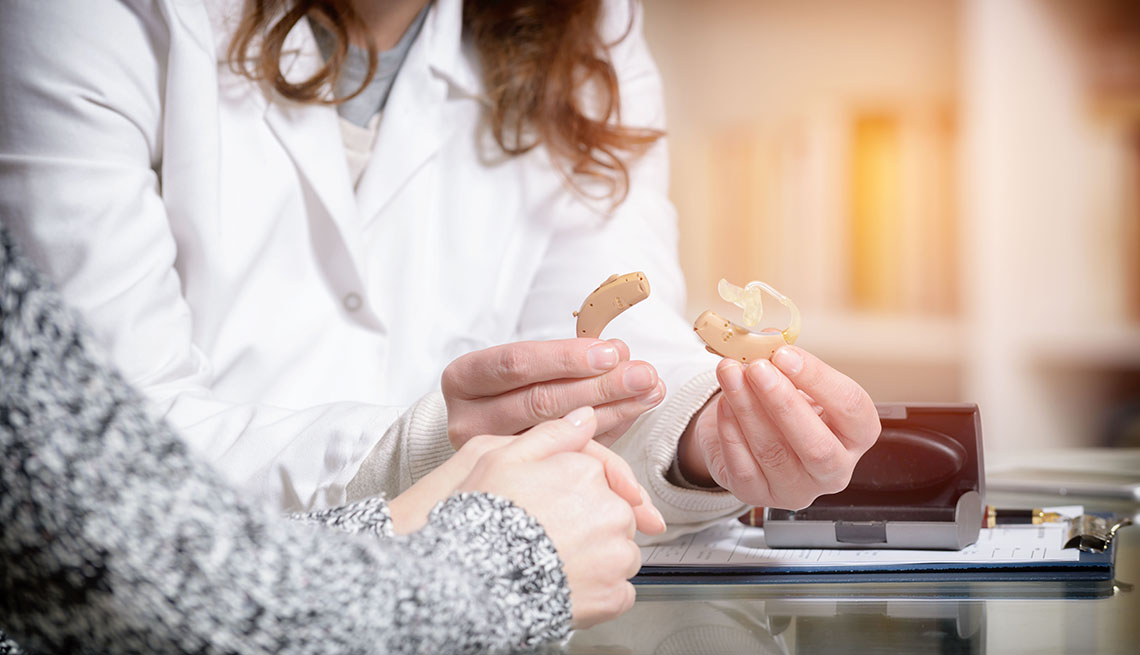 En español | Don't be deceived by their tiny appearance: These latest hearing devices have huge benefits when it comes to improving your health and well-being. Consider these seven wonderful things a hearing aid can do.

Research from the Johns Hopkins University School of Medicine and the National Institute on Aging found that even mild hearing loss can triple your risk of taking a tumble, with the risk increasing by 140 percent for every additional 10 decibels of hearing loss.

People who can't hear well are simply less aware of what's going on around them, which makes them more likely to collide with a careless passerby or get tripped up by a rambunctious family pet. Also, balance requires brain power. Problem is, people with hearing loss use more of that gray matter to hear, which means that there are fewer mental resources left to help stay upright.

Hearing disorders are associated with depression. A survey by the National Council on Aging of 2,300 hearing-impaired adults, age 50 and older, found that those with untreated hearing loss are more likely to battle depression and anxiety than those who use hearing aids. Among those with severe hearing loss, 30 percent of nonusers of hearing aids fessed up to sad feelings, compared to 22 percent of hearing aid users.

One possible reason: People who are hearing impaired are a lot less likely to participate in social activities. “We're community animals,” says Jackie Clark, a clinical audiologist and clinical professor of audiology at University of Texas at Dallas. “Isolation leads to loneliness — which leads to depression.”

Bulk up your brain power

The use of hearing aids can help improve brain function and working memory. A research team from the University of Maryland Department of Hearing and Speech Sciences (HESP) followed 35 older adults with mild-to-moderate hearing loss who had never worn hearing aids. One group was given hearing aids to wear over a period of six months; the other group went without. The researchers used a variety of tests to assess participants’ hearing, as well as their working memory, attention and processing speed. After six months, the same tests were repeated. What they learned: Those who wore hearing aids showed improved memory, as well as an improvement in the way the brain processed sound.

"When you have hearing loss, the signals coming in through your ears and getting sent to your brain are degraded, so the brain has to work hard to make sense of them,” says Maria Wynens, an Atlanta-based audiologist. “But the brain has a finite amount of energy, so at some point, it's going to have to pull energy from other places, such as memory, thinking and concentration.”

Conversely, when you're able to hear, “it frees up resources in the brain that can be used for cognitive function,” notes HESP Assistant Professor Samira Anderson, who led the research at the University of Maryland.

Decrease your risk of dementia

Researchers from Johns Hopkins and the National Institute on Aging found that older adults with hearing loss may be more likely to develop dementia than those who retain their hearing. A 2011 study focused on 639 participants whose hearing and cognitive abilities were tested regularly for a period of 12 to 18 years. Though about a quarter of the people had some hearing loss when the study began, none had dementia. Researchers found that those who had hearing loss at the beginning of the study were much more likely to develop dementia.

Researchers offer three ways in which untreated hearing loss and dementia may be linked. It may be that the constant strain of having to decipher sounds over the years overwhelms the brains of people with hearing loss, leaving them vulnerable to dementia. Also, those who can't hear well become socially isolated, leading to less mental stimulation and eventually cognitive loss. Most importantly, hearing loss results in tissue loss in the hearing portion of the brain, which is also responsible for functions such as memory, learning and thinking.

Untreated hearing loss can hit you where it really hurts: your bank account. A national survey of more than 40,000 households conducted by the Better Hearing Institute found that people with hearing loss who don't wear hearing aids lose as much as $12,000 in income annually, depending on the degree of their impairment. What's more, those suffering from severe hearing loss have unemployment rates that are double that of the normal-hearing population, and nearly double that of those who've opted to wear aids.

Keep you out of the hospital

Want to steer clear of white lab coats? A 2018 study from the University of Michigan found that older adults who wear hearing aids are less likely to go to the hospital or emergency room. Those who are hospitalized have shorter stays. What's more, older adults who have untreated hearing loss have much higher health care costs compared to those who don't — an average of 46 percent more, at $22,434 per person over the span of a decade, according to a 2018 study from Johns Hopkins Bloomberg School of Public Health.

As any self-help book worth its salt will tell you, communication is key when it comes to maintaining friendships, not to mention a strong marriage. A British study seems to back this up: 44 percent of those surveyed said that relationships with their partner, friends or family suffered because they couldn't hear properly; 52 percent of those surveyed said they feel left out and ignored in social situations; and 34 percent lost touch with friends, and in some cases, had seen marriages fall apart due to hearing loss.

Hearing loss can limit social encounters, disrupting the flow of conversation and making any kind of spontaneity pretty much impossible. And then there's the toll it takes on marriage. A study published by the ASHA Leader found that relationships with partners seem to suffer the most from hearing loss. “The load shifts to the people around you, usually your spouse. And since it takes a lot of energy to do the work of repeating things, he or she will eventually stop doing it,” says Wynens.

The good news: In a Hear the World Foundation survey of more than 4,000 people, 70 percent of respondents said that hearing aids improved their relationships.