Don't give up on having a great complexion. Learn how to banish redness, bumps and spots 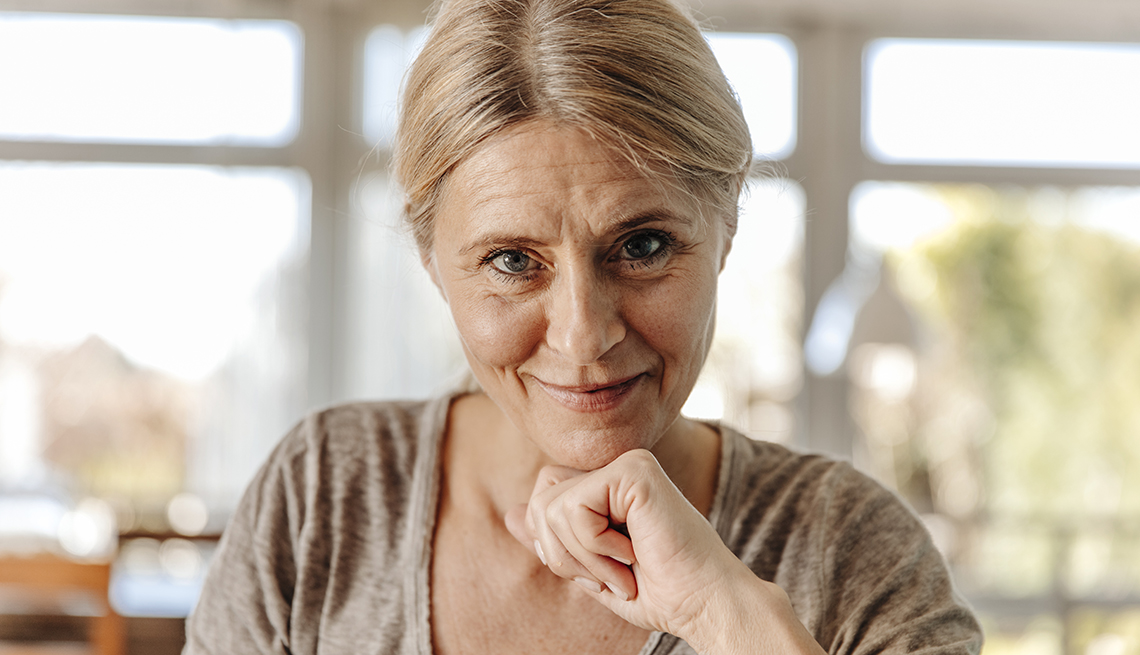 ﻿Whether you’ve coasted for decades with a flawless complexion or bumped along with a breakout or two, most people find that at a certain age their skin demands some extra attention. Years of sun exposure may bring discoloration. Your skin barrier, designed to latch onto moisture, weakens, causing dryness and irritation. Collagen begins to break down, leaving you with a lackluster look. And what’s with those spots that seem to pop up overnight? If you’re not loving what you’re seeing in the mirror, read on for doctors’ best advice to make age spots, redness and more history.

What it is. Basically, a less charming form of blushing. The main symptoms of this inflammatory skin disease are redness, broken blood vessels (which appear on the cheeks and nose but can find their way to the forehead and chin) and, in some cases, acne-like bumps. It’s typically found in fair-skinned adults, usually women. In a survey conducted by the National Rosacea Society, 39 percent of the participants said their rosacea first appeared after the age of 50.

What causes it. The exact cause is unknown though the condition tends to run in families. “It’s also thought to be brought on by hyperactive blood vessels underneath the skin’s surface,” says Elizabeth Martin, a Birmingham, Alabama–based dermatologist. Another possible cause: microscopic mites, called Demodex, that release bacteria into the skin when they die, which can lead to inflammation. “Everyone has these mites inside their skin, particularly on the face, but people with rosacea can have an overconcentration,” says Martin. Studies show that people with rosacea may have more than 10 times the Demodex mites on their skin as those without the condition.

What to do. Rosacea is a chronic condition and can’t be cured. But it can be treated. Prescription topical medications, such as Mirvaso and Rhofade, shrink blood vessels in the skin to diminish redness. You can do away with irritation, bumps and swelling by using an anti-inflammatory azelaic acid cream, like Azelex, or by taking an oral antibiotic such as Metronidazole. Stubborn broken blood vessels, however, can't be effectively treated with topical or oral medications and usually require therapy with a VBeam laser, pulses of light that penetrate the skin. It may take anywhere from one to eight treatments (for $400 to $800 apiece), depending on how serious the problem is.

“People with rosacea often have sensitive skin that requires daily washing with a mild cleanser,” says Martin. You'll also need to steer clear of triggers that can lead to flare-ups: hot and cold temperatures (“Try working out in a cool environment whenever possible,” says Martin) and hot, spicy foods and alcohol. Stress can also cause the red to return. Also good to know: A study found that sunscreen helps reduce the number of rosacea flare-ups. “Look for one with zinc oxide,” says Debra Jaliman, a New York City–based dermatologist. “It’s an ingredient used in diaper-rash-creams that’s easy on the skin.”

What it is. Skin that looks and feels dry, rough, tight, itchy and uncomfortable. At its most miserable, you might have red, flaky patches — particularly on your elbows, lower arms and legs.

What causes it. Your risk of dry skin increases with age — in fact, more than 50 percent of adults age 40 and older deal with it. Our sebaceous glands pump out less oil, while the skin’s barrier, which helps skin hold onto moisture, is more compromised. This leaves skin vulnerable to a laundry list of irritants, including dry and windy winter weather, hot baths and showers (which can strip away the skin’s natural oil and play havoc with its moisture levels), along with harsh chemicals in soaps and detergents. Even certain medications for blood pressure and cholesterol can be culprits.

How to help. Your best bet: Avoid triggers that leave skin parched in the first place. Take warm (not hot) baths and showers. “Lather up with a mild fragrance-free soap or a cleansing cream, and soak for no more than 10 to15 minutes. After bathing, pat your skin dry — don’t rub — with a towel and immediately after getting out of the bath, slather on a moisturizing cream,” says Martin. Avoid products with fragrance and switch to a fragrance-free detergent (or try double-rinsing your clothes).

Otherwise, wear a scarf, hat and gloves when you go out, and use a humidifier at night to help replenish moisture in the air lost to dry indoor heating. You can also help moisturize from the inside by consuming plenty of essential omega-3 fatty acids (EFAs), which help boost hydration. Good sources include fatty fish (salmon, sardines, albacore tuna), seeds (flaxseed, pumpkin and sunflower), avocado and walnuts. Also shoot for drinking around eight glasses of water daily, but know that you can satisfy some of your recommended daily allowance of H2O with water-filled food, such as lettuce, strawberries or cucumbers.

What it is. Sun spots, age spots, liver spots — whatever you want to call them, they’re unsightly. Lentigines (that’s the clinical name) can look like small freckles or splotchy patches. Unlike freckles, which can fade during winter months, these stick around.

What causes it. Blame the sun (again). Those spots are basically collections of brown pigment cells (also known as melanin) that appear on the skin’s surface after exposure to ultraviolet (UV) rays, which is why you’re likely to see them on your face, hands, forearms and chest. Over time, they usually darken and multiply.

How to help. Sun spots can be treated with a prescription-strength bleaching cream. Hydroquinone, thought to be the gold-standard ingredient, works by increasing the breakdown — and decreasing the production — of melanin pigment. “You can also see great results with prescription-strength retinol, which helps slough off dead skin and lighten spots,” says Jaliman. Natural ingredients like licorice extract and kojic acid (derived from mushrooms) can also help even out skin tone and block the production of melanin. Want to pull out the big guns? A Revlite laser, in a series of about four-to-six treatments, can get rid of discoloration by dissolving pigment. Spots fade after several weeks or months. (Bonus: The in-office procedure will also improve the overall look of your skin by shrinking pores and boosting collagen production.)

What it is. Drab-looking skin that’s lost its smoothness and youthful radiance.

What causes it. There are a lot of reasons why skin becomes lackluster. For one thing, as we age cell turnover starts to slow down, which causes dead skin cells to accumulate on the surface of our skin, give it a dull, rather than dewy, look. Then there are years of bad habits. Alcohol dehydrates the skin, sweets cause collagen (a strengthening component that gives skin elasticity) to become stiff and brittle and smoking decreases the blood supply to the skin. And then there's the cumulative effects of sun damage. “Even 10 minutes of exposure a day, over the course of a lifetime, is enough to age your skin drastically,” warns Jaliman.

How to help. Yep, you can get back that youthful glow — or much of it, anyway. Besides ditching a few habits and committing to a daily sunblock, rethink your daily skin-care routine. Start by getting your skin very clean. Don’t just lather up in the morning. “Wash well whenever coming in from outside to remove dirt and pollution from the skin's surface, using a washcloth to gently rub skin to whisk away dry skin,” says Jaliman.

To double-down on exfoliation, use a cleanser that contains alpha hydroxy acids to sweep away buildup on the skin’s surface and encourage cell turnover. And invest in a good brightening serum with vitamin C, an antioxidant that makes skin glow, before a final boost of hydration from a moisturizer. If your skin needs a serious boost, consider an in-office resurfacing treatment, such as microdermabrasion or a chemical peel. They can be pricey: Each microdermabrasion treatment can cost anywhere from $75 to $300, and you may need multiple sessions. A chemical peel is, on average, about $700 and usually needs to be repeated every three to six months to maintain that luminous look.

What it is. These waxy brown skin growths (dubbed the “barnacles of aging”) typically show up during and after middle age — usually on the chest, back, scalp, face and neck. Some are tiny, others are larger than an inch. “Seborrheic keratoses look ‘stuck on,’ as if you could almost scratch them off with a fingernail,” says Martin. Although they aren’t a cause for concern, they can sometimes have an uneven color and irregular shape, resembling melanoma, a deadly form of skin cancer.

What causes it. The exact cause isn't known. The growths are pretty common and usually multiply with age. However, seborrheic keratoses tend to run in families.

How to help. If your seborrheic keratoses aren’t bothersome, no treatment is necessary. However, they can be itchy or bleed or get irritated when they rub against your clothes. If that happens, your dermatologist can safely remove them — usually using cryosurgery (freezing them off with liquid nitrogen) or vaporizing them with a laser.

What it is. Often referred to as “red moles,” these spots aren’t moles at all, but rather a cluster of blood vessels. They usually pop up on the chest, back or stomach.

What causes them. It’s unclear why they happen, though they seem to increase (both in size and number) after the age of 40. In fact, one study noted that over 75 percent of people over age 75 have them!

How to help. If they rub against your clothes and get irritated — or if you simply don’t like the way they look — a dermatologist can remove them surgically by cutting or shaving them off or zapping them away with a laser. They usually fade over two-to-four weeks after one or two treatments.

What it is. These small pieces of dangling skin are typically connected to the underlying skin by a thin “stalk”. They’re usually skin-colored but can be darker.

What causes them. About 25 percent of us develop skin tags, usually starting after the age of 50. Frequently caused by friction, they’re often found on areas of skin that rub against clothing, particularly around the neck, underarms and groin. (Bra straps are a common culprit.) “They can also be caused by skin-to-skin friction, such in folds of skin,” says Martin. They're also common in people who have diabetes. Some studies have found that as few as three skin tags could be linked to an increased risk of the disease.

How to help. These tags may become irritated — or noticeable, sometimes finding a home on your eyelid. In that case, says Jaliman, “Your dermatologist can remove them by cutting them off with a blade or scissors, freezing them with liquid nitrogen or using electrocautery to burn them off.”

Try these creams and serums that pamper mature skin