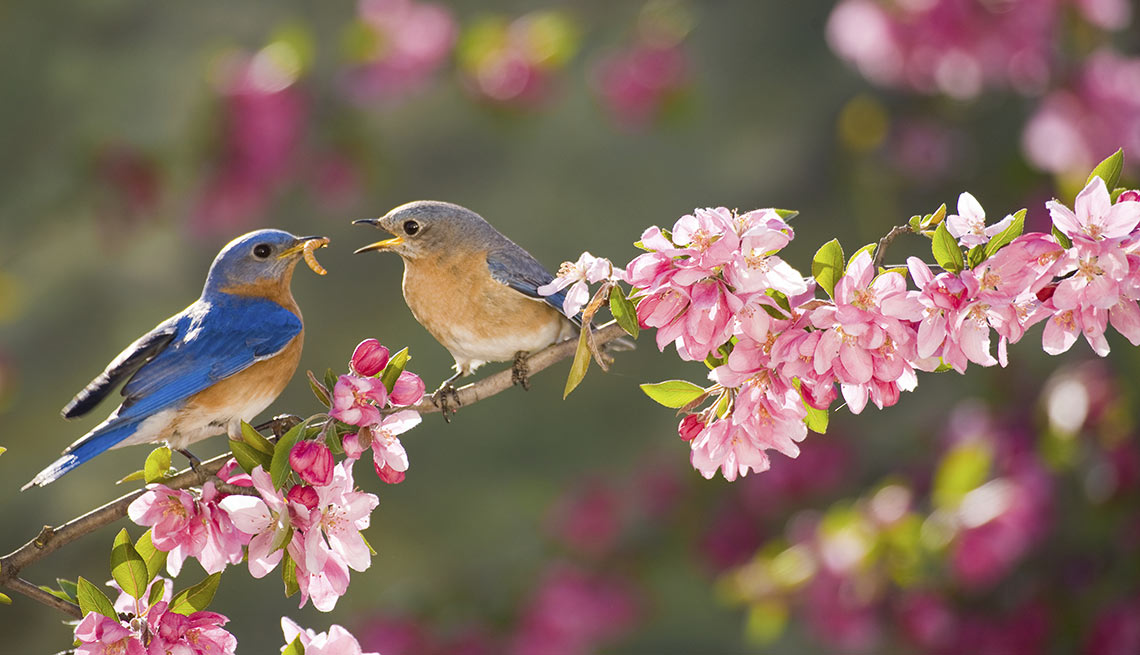 Iconic sounds of spring that you'll want to listen for.

It's spring, which means a host of new sounds to test your hearing by. If you can't hear these iconic sounds, it may mean you need hearing aids.

Sweet birdsong. Wherever you live in the United States, the great spring bird migration happens at this time of year. Warblers, tanagers, grosbeaks, orioles, thrushes and vireos fly through on their way from their winter homes in the tropics, singing as they wing their way north. One of my favorites is the eastern bluebird, a very early arrival in my part of western Massachusetts, claiming its backyard house in February. I realized only this spring (an early one in the east) that bluebirds sing. Here's a YouTube video. Hope you can hear it! And if you think that only humans are affected by the din of urban traffic, a 2012 study found that urban sparrows sing at a higher pitch than they used to, to compete with traffic noise.

Pattering rain. Louder than snowfall but nothing like the deluge of a summer downpour, a gentle spring rain measures about 50 decibels, equivalent to a refrigerator's hum.

Rustling leaves. Leaves fluttering in the breeze are just 20 decibels, close to the softest sound most humans can hear.

Spring peepers. I always thought these were newly hatched frogs, but spring peepers are actually members of the tree frog family. The high-pitched sound they emit is rather romantic — it's a chorus of males looking for mates. Click here for a picture of the peeper's balloon-like throat, which makes the sound.

Buzzing mosquitoes. If you're worried about disease-carrying mosquitoes this summer, their buzz comes in at about 40 decibels, which should be audible. (And if you hear it, let's hope you're wearing insect repellent.)

Noisy squirrels. According to expert Robert Lishak, an associate professor at Auburn University, squirrels have a regular language, from "kuk" (a sharp bark of alarm, usually repeated three times) to "quaa" (the predator is still in sight but not quite as threatening) to the "quaamoan." Lishak describes the quaa moan as sounding like a "chirp followed by a meow." "Muk-muk" is a soft buzzing or huffing noise, possibly a male mating call. These vary in decibel level, with the soft muk-muk at around 20 decibels. You'll need sharp hearing to catch that one.

America's favorite pastime. How loud is the sound of that bat hitting the baseball? The crack of the bat actually varies in pitch and intensity, depending not only on how hard the ball is thrown and where exactly it meets the bat, but on the kind of hit it produces. A 2014 analysis of baseball bat sounds found that a line drive in general produced the highest-frequency sound, amplified by sound systems in a stadium or on TV or radio. This is followed by the sound of a home run, a ground ball hit, and a ground ball out. According to a similar article in the New York Times , a ball hit in the sweet spot has a sharp crack, and a ball hit on either side will thunk. The crack may alert an experienced outfielder to the trajectory of the ball before he can visualize it.