Scientists, in experiments with mice, have demonstrated for the first time that a special high-fat, low-carbohydrate diet called the ketogenic diet can reverse kidney failure caused by type 1 or type 2 diabetes.

If the findings can be replicated in humans, the diet would have profound implications for personal health and for the nation's health care, says neuroscientist Charles Mobbs of Mount Sinai School of Medicine in New York. "This is the first study to show that a dietary intervention alone is enough to reverse this serious complication of diabetes," says Mobbs, senior author of a paper published online in PLoS One on April 20.

The mice, bred to develop type 1 or type 2 diabetes, were allowed to develop kidney failure, known as diabetic nephropathy. Then half were fed a standard high-carbohydrate diet while the other half ate a high-fat ketogenic diet, typically used to control epilepsy in children. 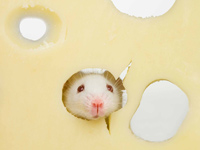 Experiments on mice show that a high fat diet may be able to reverse kidney failure.

After eight weeks, kidney failure was reversed in the mice on the ketogenic diet. Their blood glucose returned to normal and the presence of the protein albumin in urine, a strong predictor of the progression of kidney disease, also was corrected.

Controlling blood glucose and blood pressure slows the progression of diabetic kidney disease, but once the kidneys are damaged there currently is no way to repair them. If they fail, dialysis or a kidney transplant is the only option, experts say, which means that reversing the disease would be far more valuable than simply delaying it.

"I believe that glucose metabolism in the cells drives diabetic complications," says Mobbs. "But controlling blood glucose levels alone doesn't correct the complications. We had to go beyond simply correcting blood glucose." In monitoring the diet, the researchers also identified an array of genes not previously associated with diabetic kidney failure. These genes "had been turned on and the ketogenic diet turned them off," Mobb says.

Mobbs says it appears this diet can reverse the genes' harmful effects in as little as a month, basically resetting the genetic switch.

Next: What does a ketogenic diet meal include? >>

The ketogenic diet now used for epilepsy in children is a tightly controlled high-fat, low-carbohydrate diet that stimulates the production of substances called ketones, produced when body fat is broken down for energy. Although cells normally burn glucose for energy, if the body is starved of carbohydrates, it will start to use ketones as an alternative source of fuel. The diet is high in fat but extremely low in carbohydrates and protein, and failure to adhere to the correct proportions disrupts the diet's effectiveness. 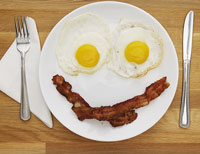 A low-carb breakfast of eggs and bacon.

A ketogenic diet meal might include an omelet made with eggs, heavy cream, butter and cheese. Or a small portion of chicken, a bit of fruit and large helpings of fat. The kinds of foods that provide fat include butter, heavy cream, mayonnaise and canola or olive oil. The diet completely eliminates candy, cookies and desserts. All foods must be carefully prepared and weighed on a scale.

The next step is to test the diet on diabetic men and women with kidney failure.

"We don't yet understand how the diet works," Mobb says. "Once we learn that, we can identify ways to mimic the diet's effect."

If this diet works as well on people as it did on the mice, "it would be a dramatic improvement in our ability to slow or reverse the damage caused by diabetes," says kidney specialist Lynda Frassetto, M.D., of the University of California, San Francisco, who was not involved in the research. But that's a big "if" because "it's often true that what you can do in mice cannot be replicated in humans." This is interesting research but not yet ready for prime time, she says.

The study shows that it's feasible to reverse diabetic kidney failure, notes Mobbs. "Whether this is the best way to do it for people is uncertain," he says, "but it can be done. And that should give us all reason to hope."