En español l The big cup of good news about coffee's health benefits just got another refill. A large new study finds that regular coffee drinkers are much less prone to dying from cancers of the mouth and upper throat.

The study, which followed more than 968,000 older men and women for 26 years, found that those who drank four or more eight-ounce cups of caffeinated coffee per day were about half as likely to die of these cancers. 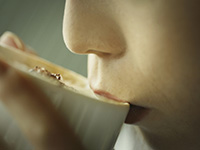 Drink coffee? It may reduce your risk of cancer.

"We wanted to look at this because there had been a handful of studies that had shown consistently that coffee seems to reduce risk of cancer of the oral cavity," said Janet Hildebrand, an American Cancer Society analyst who led the new research, which was reported in the American Journal of Epidemiology.

These cancers, Hildebrand said, are most often linked to smoking and alcohol consumption. Although the early stage of the disease is highly treatable, researchers wrote, more than 60 percent of patients do not seek medical attention until their cancer has advanced and the odds of long-term survival have greatly worsened. Men are more than twice as likely as women to develop and die from mouth or pharynx cancer.

The subjects (average age 57), were cancer-free when they enrolled in the Cancer Prevention Study II starting in 1982, Hildebrand said. They were followed through 2008, and 868 deaths from oral/pharyngeal cancer were recorded.

Based on self-reported dietary information, the study found that people who drank four to six cups of java daily had a 49 percent lower risk of dying from these oral cancers. A similar but weaker association was found for those who drank decaffeinated coffee, while no link was seen with tea drinking.

No one knows for sure why coffee might have cancer-fighting properties, but animal and laboratory studies have shown that two compounds in coffee — cafestol and kahweol — protect against oxidative DNA damage. "We need laboratory studies on actual cells and tissues from the oral cancer" to really understand exactly how coffee is helping to protect against cancer, Hildebrand says.

She cautions that her study only captured how many people died from the disease, not how many were diagnosed with cancer overall. This means that researchers could not determine whether some people may have survived oral cancer due to improved treatment or earlier diagnosis, rather than their coffee consumption, she says.

However, the cancer society study was in line with a 2010 paper published in Cancer Epidemiology, Biomarkers and Prevention by international researchers, who found a 39 percent decreased risk among coffee drinkers of developing oral-pharyngeal cancers in a review of nine previous studies.

Oral-pharyngeal cancers typically are treated with a combination of surgery, chemotherapy and radiation, says Sara Pai, M.D., a head and neck surgeon and researcher at Johns Hopkins Medical School. The overall survival rate for head and neck cancers is 57 percent, she says.

The newly published cancer society research benefited from following a large pool of patients, Pai says. "They followed a large group of patients and their results seem reliable."

Michael Haederle is a freelance writer specializing in health and medical research.