En español | Bilingualism may be the best weapon in our arsenal against mind decay.

That would come as a surprise to educators from the early 20th century through the 1950s, who pushed immigrant children to abandon their parents' language. Two languages, it was said, would confuse kids and even divide patriotic loyalties. By the 1960s, researchers reversed course, revealing that bilingual children were actually scoring better on intelligence tests than their monolingual counterparts.

Now a new study from the Rotman Research Institute and York University in Toronto, Ontario, goes even further. Using two languages interchangeably throughout life, researchers found, leads to a lifelong advantage in attention and concentration and actually delays the onset of dementia and Alzheimer's disease by 4.3 years. That's especially welcome news for Hispanics, who have a 1.5 times greater chance of developing Alzheimer's than non-Latino whites.

"Learning a language will not make you smarter, but being multilingual definitely gives you cognitive advantages," says Raúl Echevarria, cofounder of Spanish- and French-immersion preschools in the Washington, D.C., area. "People who are multilingual face greater ambiguity in day-to-day life; they have to decide which linguistic pool they will draw from. This requires them to really key in and be selective. That is a high-level cognitive skill."

Dr. Fergus I.M. Craik, who led the Canadian study, agrees. "Bilingual children have an advantage and disadvantage relative to monolingual children," he explains. "The disadvantage is that their vocabulary is slightly smaller in both languages. The advantages come from various tasks which require inhibiting relative information." 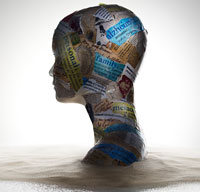 This ability to suppress one language while using another one nurtures mental agility, a skill researchers believe is far more useful than vocabulary lists. Mental agility is key in fighting against cognitive loss.

"The conclusion, which is really quite dramatic, is that speaking two languages does have this effect,'" says Craik, which seems to "buffer a person against the symptoms of dementia." And while chatting equally well in Spanish and English doesn't actually stop deterioration, what happens for bilinguals  —  used to translating, each day, between ideas and concepts as well as words  —  is that "parts of the brain are fitter and better able to compensate for losses in other parts." And that keeps the brain working better, for longer.

Thinking about learning a second language later in life? Craik says that it may have some effect in fighting cognitive decline but to a lesser degree — similar to the effects of other taxing mental activities.

<p> <strong>Bilingualism</strong> </p> <p>Speaking two languages from childhood on can stave off dementia and Alzheimer's disease for more than four years.</p>

Immersion programs. Families with children as young as age 2 are choosing language immersion schools, starting in preschool and continuing through high school.

Family. Keeping certain relationships Spanish-only will push children and adults alike. And what better way to establish a bond than for abuelos (grandparents) to speak to their grandchildren only in Spanish?

Travel. Trips to Central and South America or Spain are great for practicing Spanish.