En español | Men and women who are trained to improve their walking skills after hip replacement surgery can walk farther and climb stairs faster than those who continue to do the exercises taught to them after the operation.

According to researchers in Oslo, Norway, studies show that three months after hip replacement surgery for osteoarthritis — the most common reason for a hip replacement — people have less pain and can walk better than before. But these positive effects frequently don't last. Several months and even years later, many still cannot walk as well as others their age and often lack flexibility and muscle strength in the affected hip. 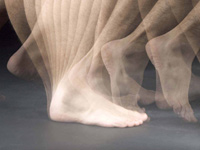 The researchers set out to determine whether people who had hip replacement surgery could benefit from physical therapy that taught them to walk the way they did before the pain of arthritis took hold.

The researchers recruited 68 men and women between the ages of 45 and 81 who were scheduled for hip replacement surgery in Oslo. Three months after surgery, 35 were randomly assigned to a walking skills training program led by a physical therapist and 33 to a control group that was advised to continue the exercises given to them after the operation.

Those in the training group attended sessions twice a week for six weeks. Each 70-minute session included exercises such as walking on uneven surfaces, stepping over obstacles, walking in figure-eights and climbing stairs. When participants mastered a task, they weren't allowed to rest on their laurels but were challenged to accomplish more, such as walking faster or stepping over taller obstacles.

"These exercises are in line with the daily activities the patients wanted to improve," says lead author Kristi Heiberg of the University of Oslo. "They found this way of training, inspiring and motivating."

This "presents a sensible program for people who have had hip replacement surgery," says Craig Denegar, director of the doctor of physical therapy program at the University of Connecticut in Storrs. It parallels physical therapy for injured athletes, he says, who progress from basic exercises to sport-specific activities.

"Climbing stairs, walking on uneven ground, stepping over obstacles," Denegar says, "are the athletic events of daily life. Anyone contemplating a hip replacement should talk to the surgeon and physical therapist about progressing to exercises that mimic what they're trying to accomplish every day."

The study was published online by Arthritis Care & Research on Dec. 15.

Also of interest: Recovering from serious illness or injury. >>