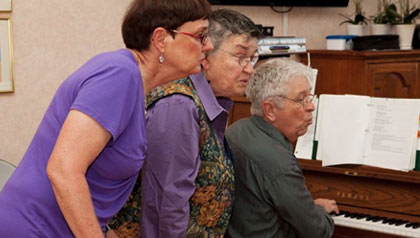 In a 'creative aging' program, actors and musicians encourage residents in long-term care homes to get in on the act.

En español | Not long ago, an arts program in assisted living or nursing homes meant a choir singing a few songs during the holidays while the residents listened quietly. But the scene is changing. Residents now write and act in plays, compose songs and stories, and dance despite their walkers — and in their wheelchairs.

How? They're not professional artists or musicians for the most part. And many have physical limitations, memory loss or other impairments. But with the help of actors, storytellers, songwriters and dancers, they can exercise creativity and have some fun.

The shift from passive appreciation of the arts to hands-on participation by the old and frail is still in its infancy. But that's changing. The belief that creative expression is vital to an older adult's quality of life is part of a movement called "creative aging," which has an enthusiastic and growing audience. Long-term care residents and their families and caregivers aren't the only fans. Federal and local governments, agencies on aging, nonprofits and foundations have begun to fund arts programs and are replicating them nationwide.

Arts programs make sense: Older adults respond to stimulation and social interaction, and art, drama, dance and musical activities provide them with new ways to connect with caregivers. The programs are also relatively cheap to run, compared with paying for medicine or physical care — and can produce dramatic results.

Scientific studies suggest the arts can offer health outcomes no pill can provide. In 2001, the late, eminent gerontologist Gene Cohen studied the influence of the arts on older adults and found that when the adults engaged and learned something new, physical and emotional benefits followed. Cohen's findings and subsequent research suggest that creative expression programs can reduce pain, the need for medication, falls, depression and loneliness — while increasing mobility, helping cognition and making participants feel valued.

Older adults respond to stimulation and social interaction, and art, drama, dance and musical activities provide them with new ways to connect to each other and to caregivers.

In a study completed this year, researchers at St. Catherine University in St. Paul, Minn., looked at Minnesota-based Kairos Dance Theatre's Dancing Heart program, which offers creative dance and storytelling in long-term care facilities. They found the majority of residents' balance and memory either improved or remained the same — notable for this population — and social interaction increased.

"People who normally would not pay attention for more than five minutes were engaged for an hour and a half," says St. Catherine occupational therapist Catherine Sullivan. "The program not only triggered memories from music, but allowed people to create new ones, learn new songs, retell one another's stories and recognize each other."

Arts are a powerful way to communicate thoughts and feelings and should be essential in long-term care, says Susan Perlstein, founder of the National Center for Creative Aging (NCCA). "They give people a common language."

With federal and private grants, Perlstein and her colleagues are training health care staff to integrate creative expression into long-term care. She is also helping artists trained to work with young students parlay that expertise into helping older people. Perlstein and company will use Princeton, N.J., Clearwater, Fla., and Raleigh-Durham, N.C., as their pilot training sites.

"Learning is lifelong," says NCCA Executive Director Gay Hanna. "It doesn't stop when someone is in a nursing home."

Maria Genné, a professional dancer and educator, believed if she could get sixth-grade boys to dance, she could get older people moving. The Dancing Heart initiative, part of her Kairos Dance Theatre, has operated in nine retirement communities in Minnesota. Next year, she expects the model to be replicated in New York, Ohio, Wisconsin and Arizona. "Dance may be physical, but it's also cognitive and social," says Genné.

Two to three professional dancers, actors and musicians oversee 20 to 25 residents for 90 minutes every week. John and Jeanette Gorman, both using walkers, are regulars. "I've had chronic pain for years, and the program helps me forget about myself," says Jeanette, 85. John's family ran a ballroom, and the couple danced for decades.

"It isn't easy getting older. Moving in itself is a big job, and sometimes upsetting," says John, 86, who believes Dancing Heart has been healing. "It makes us feel young again."

Next: Creating music in care facilities. » 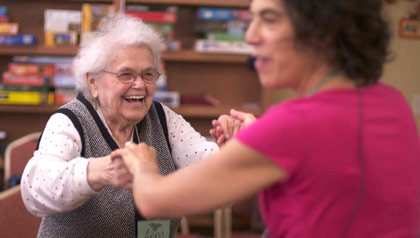 Songwriters and musicians in a Washington state-based company begin by asking residents what they want to write about or pose a question (e.g. "What is goodness?"). As ideas flow, a facilitator puts them together. But it's the residents who come up with the lyrics and melody.

So far, some 3,000 older adults, average age 87, in 36 facilities in California, Washington and Pennsylvania have created 300 songs. "We believe residents will come up with something incredibly interesting, funny, meaningful, deep, true or unexpected — and they do," says Songwriting Works founder Judith-Kate Friedman. "We don't know their diagnoses, so it gives them a fresh start."

Friedman recalls a man who couldn't enunciate more than a couple of words but was able to create 70 percent of a complicated melody to a song about homecomings during World War II — just by singing "ah, ah, ah." "Creating music in care facilities is restorative, invigorating and enlightening to the brain," says Friedman.

"When Judith-Kate uses one of my lines, I am so pleased," says Edie Sadewitz, 91, a widow who lives at the Jewish Home in San Francisco. "I never thought I could be so important in creating such a beautiful song."

To find programs near you, contact the National Center for Creative Aging.

An Oakland, Calif.-based acting company reaches care facility residents through stories. It uses two approaches: For those who are cognitively aware, storytellers dramatize a story and encourage the audience to relate their own tales. For those with dementia, Stagebridge uses a program called TimeSlips, which provides a photograph to kick-start discussion. The leader asks open-ended questions, crafting the residents' reactions into a story, and reads back the finished product.

Kirk Waller, director of storytelling at Stagebridge, teaches residents with and without dementia, but finds results similar. "As I am setting up, often people are not smiling, even grumbling," he says. "By the end of the class, they are talking more, smiling and laughing." Storytelling often becomes a shared experience. Doctors, medical staff, family — even UPS delivery workers — often get caught up in the sessions, too.

For Waller, watching the transformation in the residents is thrilling. "They forget about where they are for the moment and remember some of the better times in their lives," he says. "It's such a pleasure to make the quality of their life better."

Sally Abrahms, based in Boston, writes about aging.