En español | Pureeing vegetables and then slipping them into food where they'll be undetectable — that's a sneaky technique parents have been using on picky kids for ages. But researchers at Pennsylvania State University decided to try it on a group of adults to see whether it could help them cut calories and lose weight.

It worked — even better than the researchers expected. The unsuspecting men and women, who ate various comfort foods enhanced with vegetable purees, not only liked the doctored dishes, but also more than doubled their vegetable consumption and cut their calories by up to 360 calories a day. 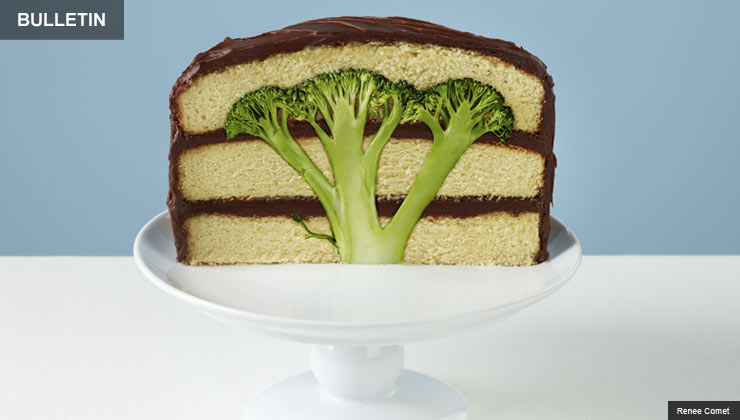 There are multiple creative ways to hide veggies in your family's food.

Imagine — if people could eat 360 fewer calories a day, they could lose one pound of body fat in 10 days. Definitely something to consider in a country where 70 percent of adults over age 20 are overweight or obese.

In the study, which was published in the American Journal of Clinical Nutrition, 41 subjects, ages 20 to 45, agreed to eat three meals at a laboratory once a week for three weeks. The meals were always the same: Carrot bread at breakfast, macaroni and cheese at lunch, and chicken-and-rice casserole for dinner. The subjects could eat as much as they wanted, along with side dishes like rolls, strawberry yogurt, and broccoli and green beans, depending on the meal. Portion size was controlled by weight, and researchers tracked the amount of food each participant ate.

The subjects were told the study was examining perceptions of different tastes. What they weren't told is that some of the entrees had been padded with purees: The mac and cheese and chicken casserole contained cauliflower and squash puree, while the carrot bread contained pureed carrots and squash, according to Alexandria Blatt, coauthor of the study. The subjects ate both vegetable-laden dishes as well as dishes prepared traditionally, without hidden vegetables.

Because vegetables have fewer calories, ounce for ounce, than the ingredients they replaced, those eating the enhanced entrees were still getting the same weight of food but with fewer calories, Blatt says.

Plus, they couldn't really detect much of a difference. About 45 percent of the participants told researchers they could tell there was something different about the appearance, taste or texture of the doctored entrees, but only two people said they could tell the food contained extra vegetables. And surprisingly, the carrot bread with the most puree got the highest rating for taste and texture, probably because of the increased moistness.

Although the study lasted only three weeks, Blatt says the strategy was still a success. Participants gave positive ratings to the food, which shows that adding hidden vegetables to favorite foods can be a palatable way to boost nutrients while decreasing calories.

For "individuals with a low liking for vegetables," they wrote, covertly adding purees into entrees is just another way of getting them to eat more vitamin-packed vegetables.

Still, the researchers acknowledge that this stealth strategy has its critics.

"Stealth vegetables get a pretty bad rap from dietitians because they say people aren't learning to like vegetables," says coauthor Barbara Rolls, professor of nutritional sciences at Penn State and the creator of the Volumetrics diet, which emphasizes foods, like vegetables, with high water and fiber content. The criticism, however, sidesteps the fact that many Americans can't get past vegetables' taste and texture, says Rolls. Despite years of prodding by health experts and the government, Americans still eat far fewer vegetables than is recommended.

What the study shows is that pureed veggies can be covertly added to a variety of foods without altering their taste and texture, she says. "The point is that the food industry could easily add vegetable puree to their products to help Americans eat more vegetables and reduce their calories."

But not everyone thinks being sneaky about vegetables is a good idea, or that it's a strategy that can be followed over the long run.

"This can only work in the long term if someone else is doing the stealthing. Imagine how upset people will feel when they find out they have been forced to eat veggies. Treated like children, they will do doubt react like children," says Marion Nestle, a professor in the Department of Nutrition, Food Studies and Public Health at New York University.

Dietitian Helen Rasmussen, who works with older adults at Tufts University's Nutrition Center on Aging, wonders if home cooks will be willing to do the extra work to make the purees. "The people in the study were paid to eat those meals. Would they go to extra lengths to steam and puree different vegetables? Is this really going to solve our obesity problem?"

On the other hand, she adds, "it is an interesting way to offset calories. And if it works for one person, then it's a good idea."

For those who want ideas for adding vegetable purees to familiar recipes, Rolls says her new book, called The Volumetrics Diet Plan, due out spring 2012, will have some recipes for low-calorie dishes with added puree, including the pumpkin bread and squash risotto recipes that follow.

How to Hide Your Veggies

The extra pumpkin in this recipe yields an extremely moist, dense lower-calorie bread that bakes best in a flat glass pan. If you don't have cranberries, use blueberries or raspberries.

1 1/2 cups fresh or frozen cranberries (or other berries)

3. Spread the batter evenly into the prepared pan and bake for about 55-60 minutes, until the top is dry and a toothpick inserted into the center of the bread comes out clean. Place pan on rack and cool completely. Serve sprinkled with a little powdered sugar or topped with fresh fruit.

A faster, no-fuss version of risotto made with quick-cooking brown rice. The squash gives it a creamy texture. Try this recipe with other types of winter squash as well.

One 14.5-ounce can reduced-sodium vegetable broth

1. Combine 2 cups of squash with 1 cup of the vegetable broth in a microwavable bowl, cover and microwave until the squash is very soft, about 10 minutes. Allow to cool for 10 minutes and then mash by hand or puree in blender or food processor until smooth.