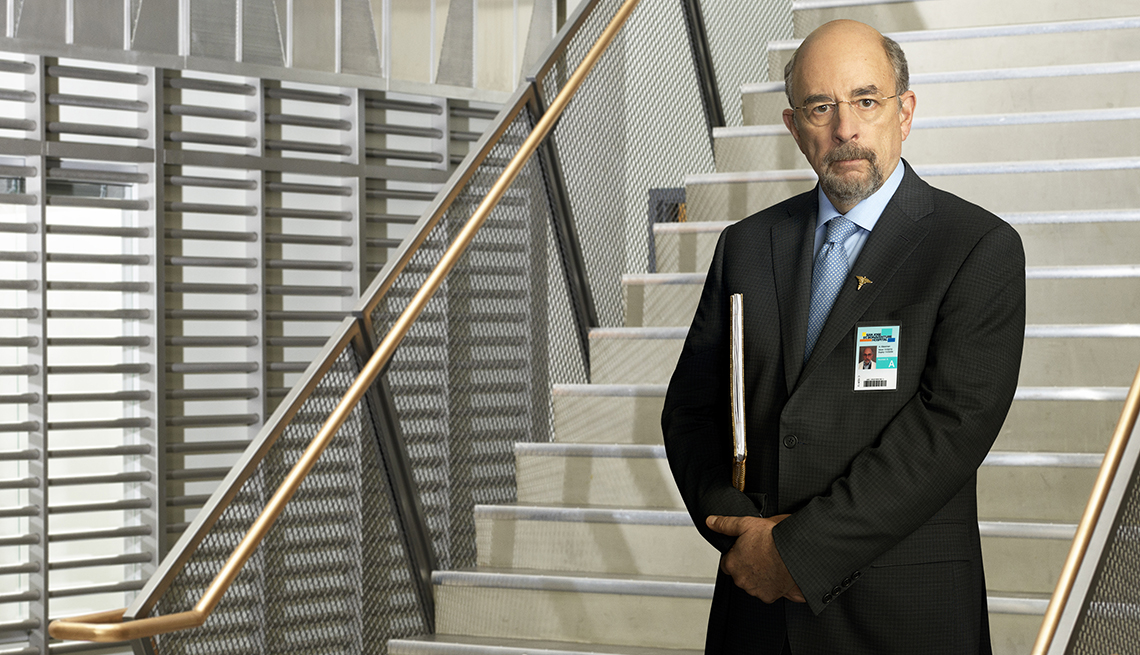 Richard Schiff, 63 — who began as a stage director (he gave Angela Bassett her first role in 1983’s Antigone), switched to acting at 32 and won one of The West Wing’s 26 Emmys as White House communications director Toby Ziegler — is on a roll. A regular on HBO’s Ballers and Starz’s Counterpart, his 2019 death-row drama Clemency won the Sundance Film Festival Grand Jury Prize, and his ABC show The Good Doctor — whose second season can now be binge-watched on ABC.com — was just renewed for a third season. Among TV’s current Top 10 shows, The Good Doctor has the most-mature viewers (median age 58.6).

AARP asked Schiff about his poignant portrayal of The Good Doctor’s neurosurgeon, Dr. Aaron Glassman, the ailing mentor of a young surgical resident who’s an autistic savant, as well as his thoughts on mentorship, mortality and the West Wing reboot he’s trying to get on the air.

For viewers over 50, The Good Doctor is TV’s fourth-most popular show. Why do you think so many grownups connect with a drama ostensibly centered on a young doctor, Shaun Murphy (Freddie Highmore)?

So much of this relationship between Shaun and Dr. Glassman has to do with mentoring and, essentially, parenting. Everyone at some point feels that we’re challenged beyond our capabilities and wish we had someone who would oversee our goals and dreams. All fields have their consiglieres. Al Pacino [Schiff’s Broadway costar in Glengarry Glen Ross] always used to talk to Charles Laughton about his work. I certainly wished I had that when I was younger. I’m guessing that people appreciate it because they mentor people, or are mentees themselves, or they wish they had that relationship.

Is it a feeling of wanting to pass on their wisdom?

No doubt. No matter how wise, no matter how many years we’ve been on this earth, we all become in need — a little lost. In many ways, Shaun was the parent figure this year, because Glassman had gotten lost in his battle [with cancer] and become despondent. When you have a close relationship, if it’s real and true, then both parties benefit because you learn from each other.

Mortality is on Dr. Glassman’s mind. Has exploring this on the show affected your own thinking about it?

Yeah. As your work tends to do when you explore a subject. I mean, my politics were certainly affected from seven years of playing Toby, no doubt about that.

In a recent episode, Dr. Glassman and Shaun use medical cannabis. People over 50 are its fastest growing market, and usage by those over 65 is up 700 percent in the last 10 years. Do you have a sense of how attitudes have shifted?

My mother, who’s 87, has been partaking for quite some time. [Laughs.] And my sister-in-law, who’s battling cancer and living with us right now, certainly takes full advantage of its medical aspects. I don’t like marijuana. I don’t like what it does to me. But I do partake in the CBD [cannabidiol] element of the hemp plant, which doesn’t get you high at all but serves as pain relief and as a relaxant. I would think that the market would be exploding for all generations, but as you get older and you’re battling health issues that would indicate pain, then yeah, of course. Some of us have known for decades the positive effects of the hemp plant, including energy, organic fabric, food. So it’s no surprise to me that as it becomes decriminalized, people will take full advantage of it. It’s a miracle plant!

You just starred with Alfre Woodard, 66, in Clemency, which explores the moral context of death row. Can movies have a positive impact on social debate?

I believe that Clemency will initiate very, very profound discussions about the death penalty. It’s a brilliant movie. I don’t think I’ve ever been more proud of a project. I absolutely adore the writer-director [Chinonye Chukwu], who spent five years researching people on death row and its effects not only on the condemned, but on wardens and the prison guards who have to literally execute the execution, and their PTSD, and the way it can destroy lives other than the one that they’re targeting.

Does social activism ever factor into your choice of roles?

Let’s put it this way: I have to keep working. I don’t think Ballers positively affects the world in any way except that it provides some good entertainment, and I enjoy those roles. But whenever I’m a part of a project that has a positive effect on people, it feels good. The Good Doctor fits into that category, and The West Wing, of course.

All the President’s Men famously caused an influx of journalism students. I wonder how many people went into politics because of The West Wing.

Everyone. Not only Democrats but Republicans, too, who wanted to make a positive difference in the world. There’s not a person I meet in Washington, D.C. — and I’m there quite often — that doesn’t say, “You’re the reason I’m doing this.” To which I respond: “I’m so sorry.”

The Good Doctor’s Shaun is on the autism spectrum — has that had a positive impact?

I’ve done work in the autistic community, and we have autism in my family. The response we get from people who have challenges, who feel like they’re outsiders, has been remarkable. I get tweets, I get letters, people send me their art and music and writing, because they feel like their voice has been emboldened by the depiction of Shaun Murphy and how Glassman and other people deal with him. They feel like a spotlight has been put on them that they want to take advantage of. It’s pretty awesome.

You’re responsible for stirring up fans about a possible West Wing reboot. Why does it still have such cultural currency?

Every election cycle, the next wave of 18-year-olds is somehow discovering the show. I think people want the reboot so badly because they’ve seen [similar shows] too many times: House of Cards, Veep, Madame Secretary. When we did The West Wing it was considered impossible to do a political television show. And since then, there have been 50 attempts and five or six successful ones. So how would you do it so that it was as unique as the original West Wing? That’s the challenge.

Toby was indicted for leaking secrets, then pardoned by President Bartlet (Martin Sheen). How would he factor into a new series?

Toby’s a real outsider, a felon, and if he’s going to get back into the political world, how would he do it? And to what extent is he willing to put up with the attacks and the vitriol that will come at him? I think he would try to be part of a grassroots movement. I think that’s a fascinating premise for a reboot. But everyone is too busy. Aaron [Sorkin] is about to win a Tony award, and probably wants another Oscar before he wants another Emmy, so I’m guessing he’s going to move on. But it’s fun to think about.