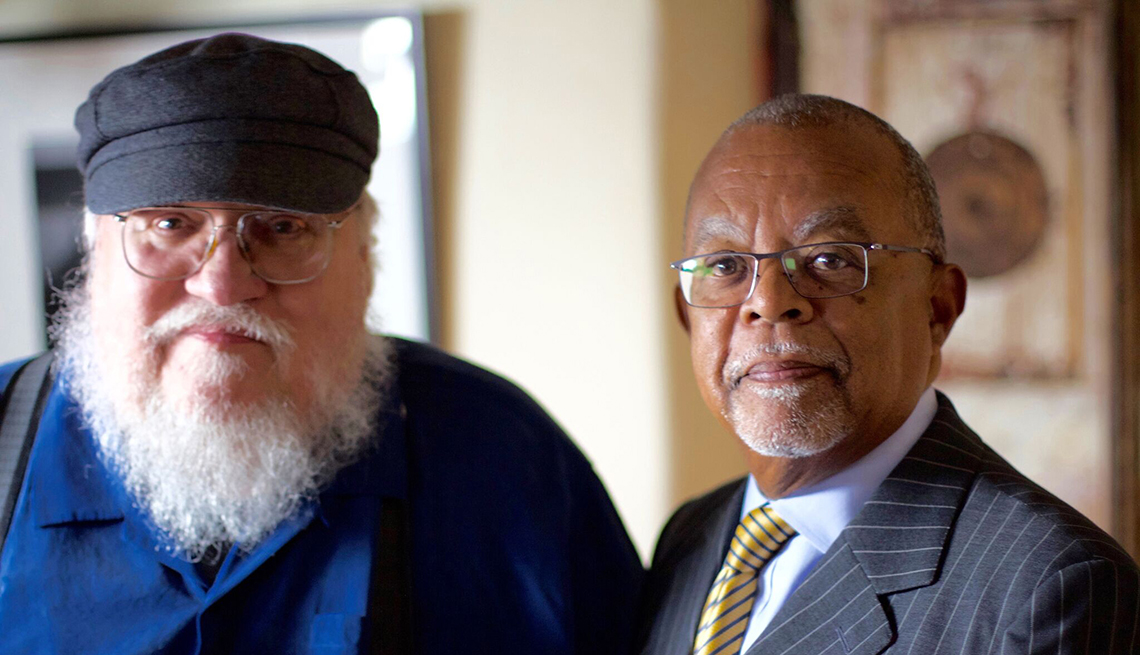 Game of Thrones author George R.R. Martin, left, is one of the celebrities tracing their ancestral roots on the new season of PBS' Finding Your Roots, hosted by Henry Louis Gates Jr.

Gates, who helped popularize today’s DNA-kit craze, tells AARP about some of the most emotional moments in Season 5, and he cries when he tells us about his own newfound ancestor.

Even private investigators couldn’t help ex-SNL comic Andy Samberg find the biological parents of his mother, Marjorie, who was adopted. But in the Jan. 8 premiere, Gates surprises Andy and Marjorie with a photo ... of Marjorie’s long-lost mother. “Andy’s mom has a speech impediment, so she signs,” says Gates. “She let out a moan of anguish, combined with sublime exhilaration — it’s one of the most haunting things that I have ever heard. Andy and I just froze while she processed the fact that we had found her mother. And then we found her father, too. After all these years.”

Former House Speaker Paul Ryan, whose family fled Ireland’s massive famine in 1851, is Catholic. So he's a little thrown when, in episode 7, DNA tests show he’s 3 percent Ashkenazi Jewish. “You could have knocked [Ryan] over with a feather,” says Gates. “He was very proud of it. He said, ‘Are you sure?!’”

For real-life drama straight out of a soap opera, see episode 10. “The hardest thing I ever had to do,” says Gates, “was to call Joe Madison [Gates’ friend, the radio personality] and tell him, ‘The man you call your father is not your biological father — your biological father is someone else.” Sensitive to Madison’s privacy and psychological well-being, Gates let Madison know he could pull out of the show. “Without missing a beat, he said, ‘I want to know who it is and I want to stay in the show.” Madison got yet another shock: His biological grandfather was one of the victims of the government’s infamous Tuskegee experiment, which intentionally deprived treatment to syphilis patients to observe their symptoms. When he discovered this — on camera —  “Joe broke down and cried,” Gates says.

In episode 9, Gates also breaks some rough news to standup comic Tig Notaro: Her great-great-grandfather, the long-ago mayor of New Orleans, was assassinated in a bar in the French Quarter.

Fans of Finding know that Gates has long been on what he calls his own “highly personal” mission to uncover the identity of his paternal great-grandfather. After all, Gates’ fascination with ancestry was ignited when he was 9, after he discovered his great-grandmother Jane’s obituary under the headline “Jane Gates: An Estimable Colored Woman.” And years ago, DNA results proved that his mysterious great-grandfather was Irish. But when the victorious experts unveil the love of former slave Jane, “it’s a total shock,” says Gates, teary-eyed. “They even show me the guy’s obituary. I’m going to have that framed and put it right by Jane’s.”