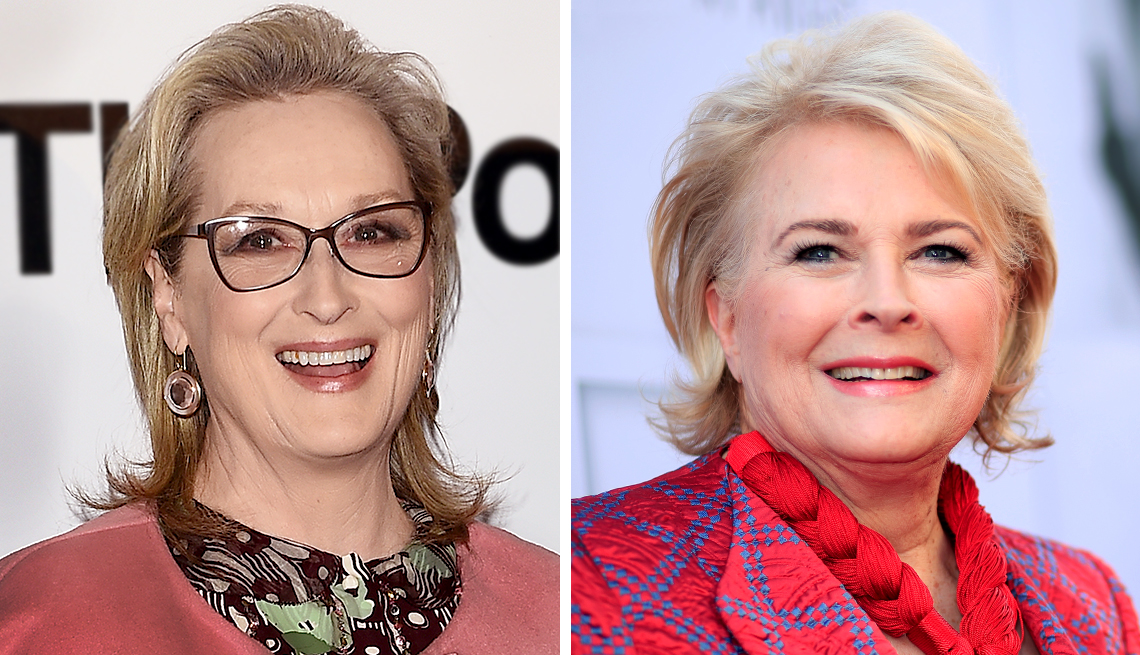 Meryl Streep, left, and Candice Bergen are two of the over-50 actresses hitting the small screen soon.
Getty Images
By

Meryl Streep, 68, joins the eight-Emmy-winning Big Little Lies in Season 2 (2019), and Candice Bergen, 71, will revive her 18-Emmy-winning show Murphy Brown for the 2018-19 season, 20 years after it went off the air. Both casting decisions show the growing power of older actors — especially women — in an entertainment industry increasingly driven by TV more than movies. Comedy writer Travon Free tweeted, “Just engrave Meryl Streep's name on all the TV awards and send them to her now to save time.”

Streep will play the mother of Alexander Skarsgard’s character, the abusive husband of Nicole Kidman’s character, butting in to look after her grandchildren. This is fun because Skarsgard’s dad, Stellan, 66, played Streep’s swain in Mama Mia!, whose sequel hits cinemas in July. Streep was talked into joining the hit show by Kidman, 50, who won Emmy, Golden Globe and SAG awards for it. “Welcome to the #BigLittleLies family Miss Streep — can’t wait xx,” Kidman tweeted.

Streep is no stranger to TV. She won the Emmy, Globe and SAG awards for Angels in America, played a gay-conversion therapist on Lisa Kudrow’s Web Therapy, and played a Southern matriarch on the King of the Hill episode “A Beer Can Named Desire.” But now TV is getting to be such serious business it can attract the 21-Oscar-nominated Streep in a bigger way. She will earn about $800,000 per episode for Big Little Lies, less than the $825,000 per episode she’ll make for her upcoming J.J. Abrams TV show The Nix, but better than the $750,000 Robert De Niro was going to get from a planned David O. Russell show (until it was scuttled after scandal struck the Weinstein Co.).

Bergen’s 13-episode Murphy Brown revival does for CBS, the champion channel for grownup audiences, what the hit Will & Grace reboot did for NBC and Roseanne’s reboot does for ABC: use a show’s past glory to grab viewer attention in the 500-series-per-year era. Bergen won a lot of glory. Even though she incredibly (and kindly) quit entering the Emmy race after she won five, to give others a chance, Murphy Brown won 18 Emmys.

No doubt the current political situation attracted Bergen and Murphy Brown producer Diane English, 69. The sitcom was the most politically pointed of its day, famously provoking Vice President Dan Quayle in 1992 to criticize her single motherhood, which incited an episode of the show mocking his misspelling of the word “potato” at an elementary school spelling bee. The Washington Post, however, lamenting that out-of-wedlock motherhood soared from 30 percent in 1992 to 41 percent in 2009, allegedly increasing child poverty levels, opined, “Dan Quayle was right.” Expect more gleeful political spats inspired by the new Murphy Brown. No word yet on which cast members will be back, or who will play Bergen's candidates for secretary, over 90 of whom failed to keep the job. Haley Joel Osment (The Sixth Sense) played Bergen's son when he was 9, but no telling if he'll reprise the role.