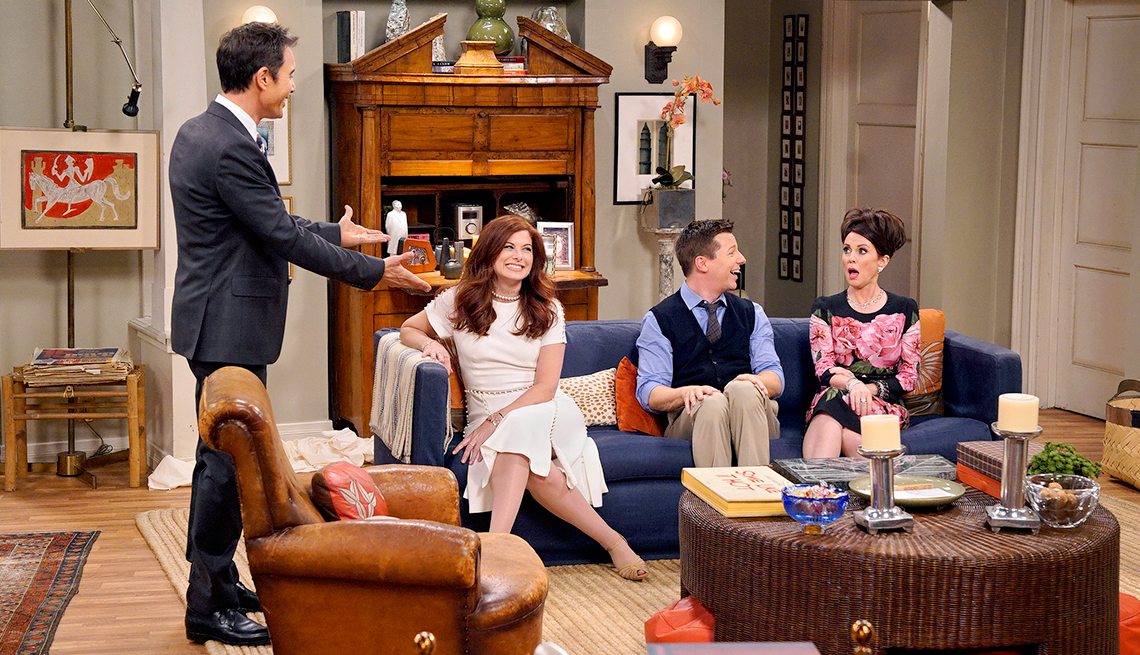 Eric McCormack as Will Truman, Debra Messing as Grace Adler, Sean Hayes as Jack McFarland, Megan Mullally as Karen Walker in 'Will & Grace'

Networks gave sneak peeks at 2017’s new shows during last week’s annual New York Upfronts event, and never has there been so much to watch. It all adds up to what critic David Bianculli calls the Platinum Age of television — infinitely richer than any past Golden Age.

“With more than 450 scripted originals across premium outlets [like HBO], streaming, basic cable and broadcast [including ABC’s 13 new shows, NBC’s eight, six each from Fox and CBS, and four from the CW], it’s increasingly challenging to keep up,” says Hollywood Reporter TV news editor Lesley Goldberg. “There’s a range of fantastic programming on every platform. It’s hard not to find something that makes you think, feel, laugh, cry.”

Scads of viewers are ecstatic about what’s coming up, especially on streaming (Netflix, Amazon, Hulu), which is rapidly eating the Big Four traditional broadcast networks’ lunch — and viewership, ad revenues and prestige awards. (On Indiewire’s list of 2017’s best 25 shows, not one was on a broadcast network.)

After a lame last season, House of Cards’ May 30 return is getting its best buzz since it transformed the TV ecosystem with its 2013 debut. Wannabe dictator-President Kevin Spacey will start talking directly to the audience again, and he’ll have a captive audience. “The Netflix caper has rediscovered its cocksure strut,” wrote critic Ed Power.

TV has become a raucous revival meeting for faithful fans of old shows. In 2018, Netflix will reboot its 2013 reboot of 2006’s Arrested Development. Twin Peaks and Westworld are back, soon to be joined by American Idol (with judge Katy Perry), Roseanne, and Will & Grace. Gossip Girls’ auteurs are remaking Dynasty, and The Shield’s creator recreates 1975’s S.W.A.T. The Good Doctor features an eccentric sawbones who sounds a lot like Gregory House.

The Little Mermaid will swim back in your world as a live musical. Big Bang Theory will spin off Young Sheldon, and Law & Order True Crime’s Menendez Brothers storyline is ripped from 1993’s headlines (and hopes to repeat the triumph of O.J.: Made in America and The People v. O.J. Simpson). At the Upfronts, James Corden — who’s spinning off a Carpool Karaoke show for Apple Music — quipped, "This is like your personal Groundhog’s Day."

Except that Bill Murray wanted to escape in Groundhog Day, and thanks to the proliferation of good shows — even ones whose names have a familiar ring - TV fans may never want to escape their couch.

But with new show production up 137 percent in 10 years and inexorably headed to 500 per year, some feel TV is now too much of a good thing. “The new Golden Age of Television is a great and wonderful thing,” wailed Pulitzer-nominated critic Ty Burr, “but it’s wearing me down to a nub.”