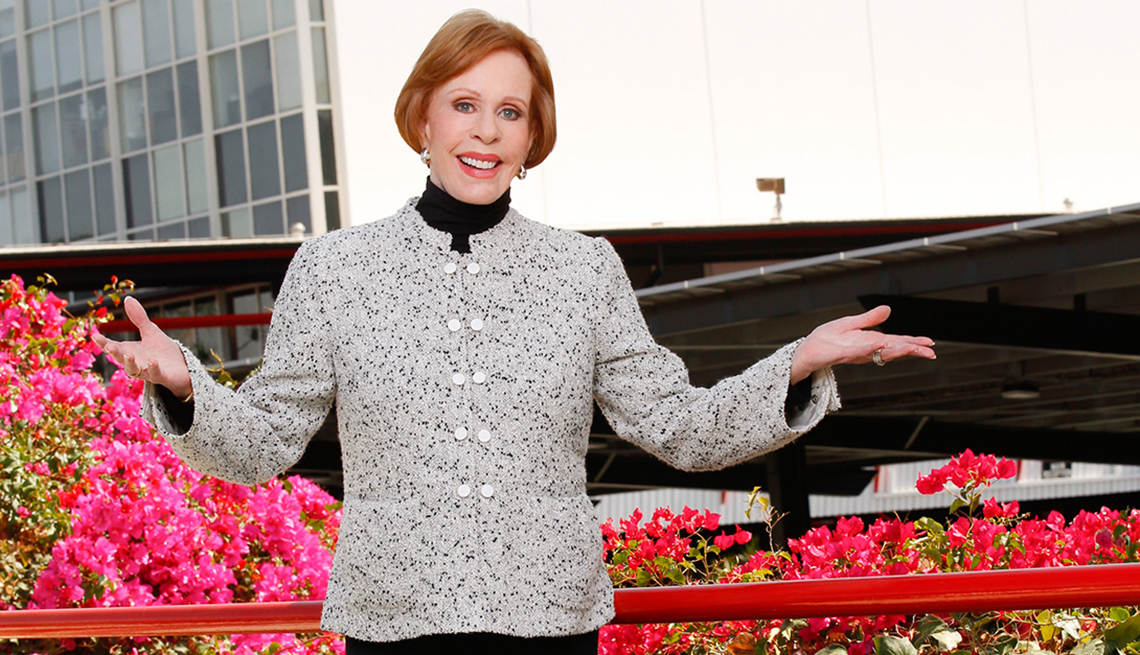 Carol Burnett is keeping busy and has a packed production schedule.

Even at 84, her laugh is the giveaway. Carol Burnett is reflecting on a half-century in television, when suddenly a giggle becomes a guffaw, then erupts into a snort. It’s a sound familiar to generations of fans, down to the 9-year-old boy she’s howling about. He raised his hand at one of Burnett's recent appearances to say he’s been watching her vintage comedy routines on YouTube.

“I ask him, ‘Do you seriously know who I am?’ ” she says. “He looks at me in the most adorable way and says, ‘Surprisingly, yes.’ Well, I just about lost it.”

Keeping a straight face was never Burnett’s strength. The unscripted doubled-over “breaks” on The Carol Burnett Show — usually mid-sketch opposite her costars Harvey Korman, Vicki Lawrence, Lyle Waggoner and Tim Conway — were hysterical sidetracks for 11 years on the CBS variety program. Clips of those crack-ups are a big part of The Carol Burnett Show 50th Anniversary Special, a fond two-hour retrospective airing on CBS Sunday, Dec. 3. “So often we couldn’t control ourselves, but the audience just sorta screamed along with us,” she says.

The look back is somewhat bittersweet. Korman passed away in 2008 — “Harvey’s comic timing, you still cannot top,” Burnett says — and comedy itself is changing. “We couldn’t do today what we did back then,” she says. “We had a 28-piece orchestra, 12 dancers, two guest stars a week, an average of 65 costumes each show, and no network interference whatsoever,” she says.

Picking her funniest sketch is harder than those Tarzan calls she used to do. Burnett’s send-up of Norma Desmond in Sunset Boulevard and her Gone With the Wind parody, in which she tears the curtains off a Tara window to make a dress, are among TV’s all-time classic moments. “OK,” she says, settling on one favorite. “I dare you to watch the dentist sketch with Tim Conway and Harvey” — Conway plays a dentist who goofs up the novocaine — "and not laugh as loud as we did 45 years ago. God, it still holds up.”

Burnett is not doing badly herself. She’s got so much youthful energy that Netflix gave her a new unscripted comedy series, A Little Help With Carol Burnett, which begins streaming in the spring. In each episode, she improvises with a panel of kids who offer life advice to celebrities and everyday people in front of a live studio audience. “There’s nothing like doing improv with a bunch of 6-year-olds to exercise the old gray matter,” she says. (Crossword puzzles and Pilates also help, she adds.)

Mostly, Burnett is celebrating the incredible run she’s had since her first show-biz job as an usherette in the 1950s at a theater on Hollywood Boulevard. (Her Walk of Fame star marks the location now.)

“It’s a bit of a cliché that to be a professional comedian, you have to be miserable, but that hasn’t been the case for me,” she says. “I’ve gotten to meet and know so many of my idols. Cary Grant was a friend. Jimmy Stewart surprised me and played piano on our last show. And today, I still get to work — and laugh, and laugh, and laugh.”