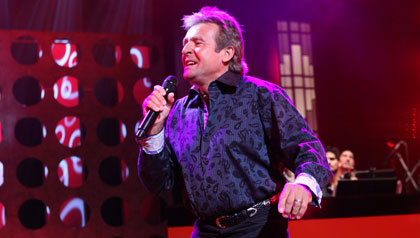 Former Monkees star Davy Jones was tapped to host a PBS concert special on Dec. 3 with Peter Noone of Herman's Hermits.

Editor’s note: Davy Jones died Wednesday of a heart attack at age 66 in Florida. This appreciation of the former Monkee originally appeared on AARP.org on Dec. 1, 2011.

He's still the cute one. At 65, Davy Jones is looking tanned and fit in a light blue shirt, light gray jacket and charcoal trousers. His salt-and-pepper hair spills over his collar in back, a few tendrils of silvery bangs fall attractively over his forehead. The Manchester, England-born former teen idol, who breeds and raises racehorses when he's not busy performing, maintains a dashing image.

Get in on the action and play free games online!

Through much of this year, he's dashed through a schedule that would frighten many — touring and making promotional appearances, both solo and with his old Monkees band mates Peter Tork and Micky Dolenz. Forty-five years after Monkee mania hit the U.S., the trio (Michael Nesmith sat out the tour) sold out many of the dates on their reunion tour, and won ecstatic reviews across the country. Rolling Stone called their two-hour performance "an excellent show from a legendary pop band giving out much, much, much more than they had to."

There's another, unexpected side to the one-time heartthrob that begins to emerge as he settles down for a chat at a quiet table in the Beverly Hilton Hotel. He's here to talk about his life and current work, including the PBS Dec. 3 concert special he hosts with Peter Noone, '60s Pop Rock: My Music. But soon it becomes clear he'll talk a blue streak about all kinds of things. Opinions, stories and jokes — he has a collection of Irish groaners he claims were given to him by a retired nun who is his neighbor — pour out of him without pause.

Jones approaches aging with a lot of humor, some of it plain dumb, Monkees style. Example: "I went to the home to see Micky, and I said (loudly and slowly), 'Micky, DO-YOU-KNOW-WHO-I-AM?' He says, 'Ask the nurse, she'll tell you.'"

But seriously, "I feel good, you know? If you feel good and you're really interested in whatever it is you're doing, age doesn't matter. Life is very interesting, if you want it to be interesting."

His is certainly that. This is Jones' 50th year in show business and he makes it clear he loves it as much as ever, feeling most alive when he's out on stage. With the Monkees tour behind him, his attention has turned elsewhere. He's focusing on a yet-untitled musical he's co-written that takes place in a small English town at the outbreak of World War II. "The music is finished, the book is finished. I'll probably direct it, and there's a possibility I'll perform in it."

And then there's '60s Pop Rock: My Music, a concert showcasing an array of AM radio favorites including Paul Revere and The Raiders ("Kicks"), Gary Lewis & The Playboys ("This Diamond Ring"), The Kingsmen ("Louie, Louie"), The Ventures ("Hawaii Five-O"), ? & The Mysterians ("96 Tears") and Jefferson Airplane ("Somebody To Love"). Some of the personnel have changed, some acts are all original members. Jones performs and cohosts with Peter Noone of Herman's Hermits, an old friend.

Next: How does Jones balance personal and professional life? >>

Jones has his other lives as well. An apprentice jockey at age 14, his love of horses has continued unabated. He has a farm in Pennsylvania where he keeps and trains racehorses. "I bred two beautiful horses last season that will race in March," he informs. It's a costly avocation, he admits. Still, riding keeps him physically fit.

Jones married gorgeous 33-year-old dancer and Telemundo personality Jessica Pacheco in 2009, a marriage that's had its tempestuous times, as he has admitted. He changes the subject each time his wife is mentioned. When asked whether she joins him out on the road, he says, "I have other plans right now," and then starts talking about his children.

He has four daughters, ranging in age from 42 to 22, from his first two marriages. Eldest daughter Talia recently competed in a horse show in Pebble Beach, Calif., and Davy was there. "She did well. She looks magnificent on a horse," he says. Daughter Sarah, 39, is the mother of his two grandchildren, and the family turned out for The Monkees' recent Greek Theater show in Los Angeles.

Daughters Jessica and Annabel live in England. Annnabel, 22, "has just moved into her first apartment, and it's in London. She's an absolutely wonderful songwriter, a great little singer — and she's never asked for anything." She wants to be known as Annabel Jones, he says proudly, not as Davy Jones' daughter. "She's in the studio right now, recording."

"I'm well in touch with my family, my children. I keep them on my answer phone, so if I want to hear one of their voices, all I have to do is punch it up and it will be there," he explains. He wishes he'd been there to help Annabel move.

"I have tried to balance my personal life and my professional life, and I feel guilty sometimes," he confesses. But his daughters have been encouraging when it comes to the demands of his show business career. "They've told me, 'Dad, that's who you are.'"

He has no plans to retire. "It used to be 65 when you went into retirement. Before that, when you got into your 50s, you were getting older. Now, we're living longer and we have more and more activities," he points out. "More activities are available for our brains — computers, iPads. I know a lot of people in the retirement village that I have a house in in Florida that are on the Internet and are reading the paper on the Internet, and they're communicating on the Internet."

Wait. He has a place in a retirement village? "I have this little house in Indianwood, Indiantown, Florida. You have to be over 55 to live there."

Jones keeps horses near his Florida place, and when he is there, he rides almost daily. Riding and performing keeps him full of energy, he says. And of course, telling jokes. And if you don't like the jokes, "I'm David Cassidy."

You may also like: Martina to Mambo on 'Dancing With the Stars' >>