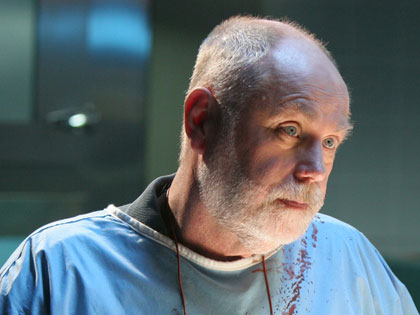 Dr. Robbins (Robert David Hall) enters the glamorous world of old Las Vegas while investigating a murder involving a well-connected ex-showgirl with ties to the mob.

Robert David Hall has been a familiar face for millions in the past decade as Dr. Albert Robbins on the CBS drama, CSI: Crime Scene Investigation, which airs Thursdays at 9 p.m. While Hall, 62, has enjoyed the flush of success, the dues he’s paid fall far beyond banging around the audition circuit. A 1978 car accident involving an 18-wheeler left him burned over 60 percent of his body, and resulted in the amputation of both legs. Hall has navigated this horrific experience as well as anyone could, not only developing a successful career as an actor and musician — he just released a new album of country/Americana-style music titled Things They Don't Teach You in School — but becoming a major advocate for the disability community. AARP spoke to Hall about his popular show, and the incredible challenges he’s overcome.

Q: When you started as the coroner on CSI, was the complicated medical terminology a challenge?

A: No. My father made me take three years of Latin in high school. I always wondered when it was going to come in handy, and it did for the show. Also, when I was injured, I spent a number of months in the hospital, so I’d seen some pretty gory stuff.

Q: After your accident, how did you find the strength to make it through?

A: I credit my mother and father. They must have taught me how to deal with tough circumstances. I really had a lot of friends, and a girlfriend at the time who stood by me. Also, I had unfinished business. I was 30 or 31, and I was doing all kinds of things. I was, and still am, a musician, and I was working in radio and taking acting classes. All my friends were starting families and had real jobs, and I was flailing wildly in the wind. In a strange sense, the accident focused me.

Q: After all that, the vagaries of show business must have seemed far less intimidating.

A: Somebody once told me that a certain casting director was really tough, and they were so scared of this woman. I’ve always thought, “I was burned over 60 percent of my body and lost two legs. How bad can a casting director be compared to that?”

Q: Perseverance has been a consistent part of how you got to where you are today. Has your son picked up that lesson from you?

A: My son works as a production assistant in television. He’s 29. I’m a little more open. He keeps his emotions to himself. I think he appreciates the behind-the-scenes part of the business. He saw me struggle while he was young. I think he loves actors, but I think he’s a little skeptical of them, too.

He once gave me a hard time. When your kid is 16, things are hard anyway, but he once watched me go out to the mailbox hoping there was a residual check there, and he laughed at me and said, “You’re pathetic,” or whatever kids feel about their parents at that age. But I think he respects me now, and he certainly knows how tough the business is.

Q: That must have been a tough thing to hear from your son.

A: The thing I’m more proud of than anything is being the father of Andrew. He was born three years after my accident, and he’s his own guy, which makes me happy. He’s been a challenge at times, but he’s a wonderful young guy. He’s very smart. I have a kid who knows right from wrong, and who people really appreciate, and I’m so grateful for that. Surviving the accident was an important thing, but the great gift in my life is my son, and I have to be careful to give him the space he needs.

Q: Have you ever had a real heart-to-heart with him about the accident and the lessons he should take from it?

A: I kept a diary while I was in the hospital and showed it to him when he was 16 or 17. He knows my story. He actually worked on our show for a while, but he found it difficult to be himself around Dad. The ultimate thing I can say is, I love him and he loves me, and that’s all I ask. The rest will work out. We talk weekly, and we get together for dinner, and we go see a movie once in a while.

I love my dad and respect him and miss him, but I never hung around my father that much because my dad was a lawyer and engineer, and he really didn’t understand what I was about. I was supposed to go to law school at UCLA — I was admitted — and instead of going to law school, I went on the road with a band. My father freaked out. Later, on his deathbed, he said to me that it was the single best decision I ever made.

There are a few chances in life where you get to take a different road. I think it’s important to stay creative, look at the moment and look at the future. I’m one of the lucky ones. I get to do what I love doing, and I don’t feel old at all. It’s dangerous to think you’re 18 when you’re 60, and I hate people saying 70 is the new 40 and all that crap. But I do know that the spirit a person has can be nurtured, and I wanna keep my spirit alive as long as I can.